Mishustin was told about the happy dumbness from the gas supply 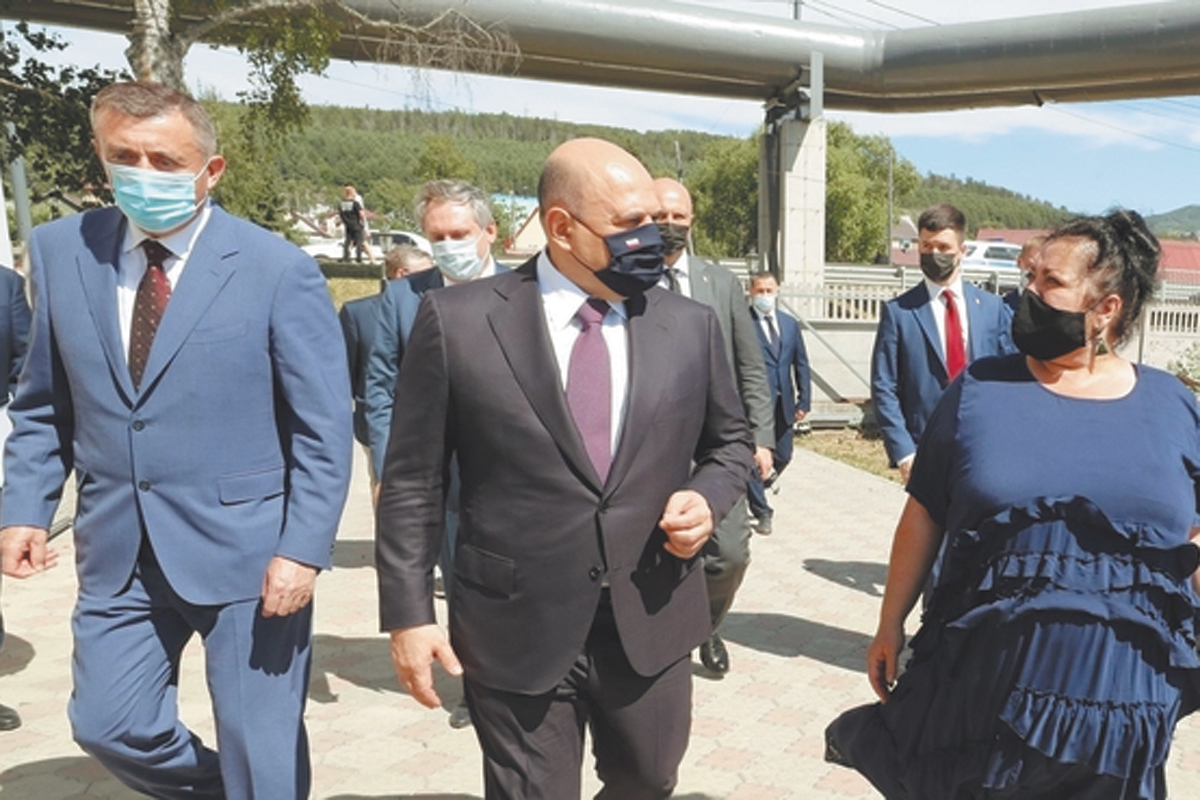 In Yuzhno-Sakhalinsk, Mikhail Mishustin learned how little our man needs to be happy. When gas came to the house of one of the residents of the city in the 21st century, she did not speak all day. From happiness.

The Far East this year is in the global trend of natural disasters, which have already been associated with global warming. While the Transbaikalia, the Amur Region and the Khabarovsk Territory are flooded with torrential rains, forest fires are raging in Yakutia, in the Sakhalin Region, where Mishustin continues to visit, there is an abnormal heat. While communicating with residents, the prime minister even had to interrupt in mid-sentence to wipe off the sweat that literally covered his eyes. However, the head of the Cabinet remains true to himself and at all public events appears in a black mask, which he began to wear regularly about a month ago on the crest of the third wave of the pandemic.

Although, compared with other territories of the Far Eastern Federal District, everything is calm on Sakhalin, they decided not to postpone the discussion of the emergency situation. “Natural disasters can be predicted, but they cannot be avoided,” the prime minister stated, recalling that similar disasters hit many countries this year. According to the head of the Emergencies Ministry Evgeny Zinichev, the Far East has already experienced three waves of precipitation. As a result, 2,800 residential buildings were flooded, in which more than 8,000 people lived, 439 road sections, including the Moscow-Vladivostok highway, 47 bridges, including a railway line on the Transsib, and 56 socially significant objects. The scale of destruction is still less than after the most powerful flood in these parts of 2013, but the response system has undergone serious testing, the minister admitted. However, the subsequent speeches of the governors left the impression that federal statistics were greatly underestimated and did not reflect the true picture of the disaster. Thus, the authorities of the Trans-Baikal Territory insist that 12 thousand people have suffered from floods in their region alone, the water has disabled 130 social institutions, and the flooded area contains two and a half of the Moscow regions. Moreover, people lost not only their homes, but also vegetable gardens, due to which many were fed all winter. In the summer of 2019, a similar situation was observed in Irkutsk Tulun, and Putin flew there several times, who personally supervised the situation with the payment of compensation, repair and construction of new housing. However, this year, no visits by the head of state to the affected regions are expected: officials were asked to prove themselves and deal with problems on their own.

The head of Transbaikalia, Alexander Osipov, asked Mishustin to think about increasing payments to the victims. Now people who have completely lost their property receive only 100 thousand rubles. This amount, in spite of inflation, has not changed for 10 years already. “If everyone applies it to himself, he will understand that this is clearly not enough,” Osipov said. However, even for this money, the victims have to, as the governor put it, “petty bargaining”, and then wait for them for months. Mikhail Mishustin demanded to speed up payments, but they explained to him that this was impossible. The reserves of local budgets have already been exhausted: the heads of the regions, without hesitation, called the situation with the allocation of funds critical – some could not “scrape together” even half of the required amount.

As for the fires, over the two summer months the fire has already “gobbled up” almost 4 million hectares (!) Of forests and, apparently, is not going to stop. Since the picture, unfortunately, will not change significantly in the coming years, Mishustin ordered the creation of a new permanent structure – a government commission to eliminate the consequences of emergencies in the Far East. According to the prime minister, she will coordinate the actions of the federal and regional authorities, as well as organizations involved in the elimination of the consequences of natural disasters. The head of the Ministry of Natural Resources Alexander Kozlov, without much enthusiasm, warned that soon the fires will have to be extinguished not only in Yakutia, where they begin in spring, but also in the Arctic: “In recent years, we have seen how the fire is shifting beyond the Arctic Circle.”

In addition to the meeting, the program of Mishustin’s stay in Yuzhno-Sakhalinsk included a visit to the construction site of the airport complex and an acquaintance with the program of resettlement of emergency housing. Once in the residential sector of the city, the head of the Cabinet of Ministers decided to visit the woman, who just the other day, within the framework of the accelerated gasification of the regions announced by the Russian authorities, was supplied with gas. “Was she warned?” The prime minister asked the governor. “No,” he said without batting an eye. “If there is a dog, we will scare it,” Mishustin decided. But the dog was not in the yard, and the hostess of the house, of course, was waiting for the distinguished guests. And she did not hesitate to tell about her own happiness and about her neighbor’s: when the gas was supplied to her neighbor, she could not talk for a day. “From happiness?” – just in case, Mishustin clarified. “Well, of course!” The head of the Cabinet, as it turned out, is also not alien to such joys. True, he did not have to wait as long as the residents of Yuzhno-Sakhalinsk. The gas water heater appeared at my grandmother’s house, who, according to the prime minister’s recollections, had heated the house with kerosene before.