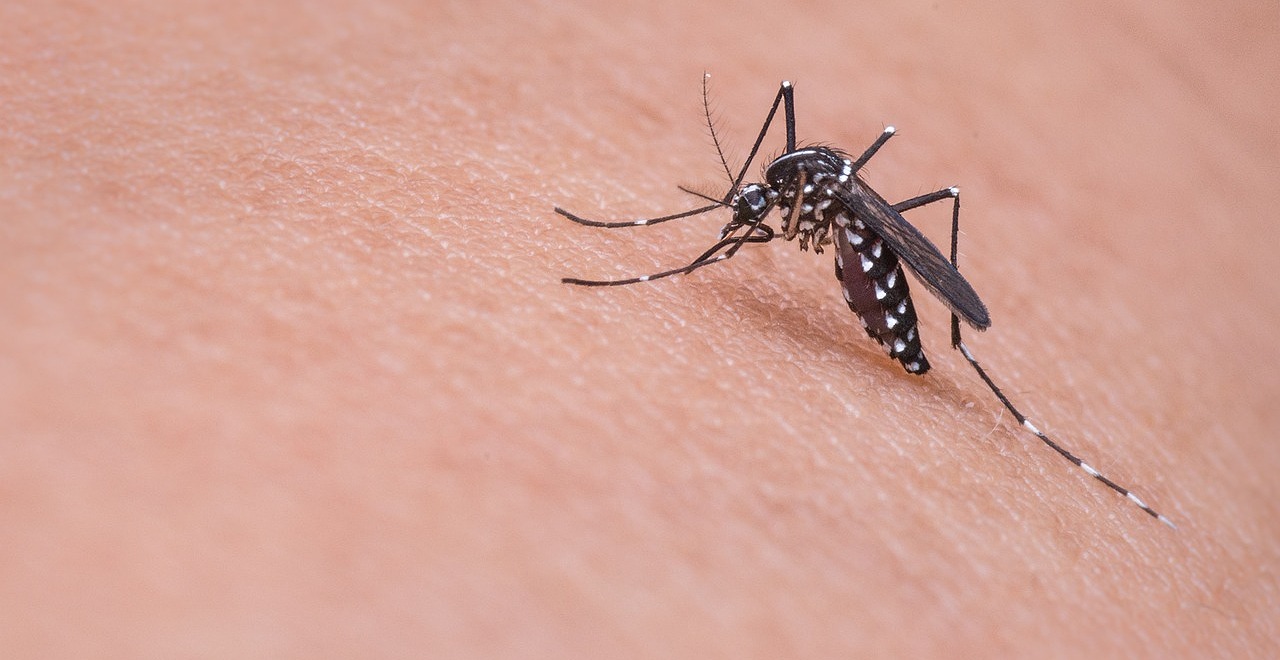 “Together we will get the West Nile virus under control. Follow the basic government rules: sleep under a mosquito net, cover yourself with DEET, wear long clothes, and cover your rain barrel.” It could just be a government commercial from the future. The warmer climate makes Europe more suitable for diseases spread by mosquitoes and ticks.

“Mosquitoes have never been a risk for viral diseases in the Netherlands, but that could well change,” says Sander Koenraadt, associate professor of medical and veterinary entomology at Wageningen University. Climate change could exacerbate risks of 58 percent of all known infectious diseases (218 of 375) worldwide, scientists recently warned in the journal Nature Climate Change. This mainly concerns so-called vector diseases, which are transmitted between people or from animals to people, via a vector organism such as a mosquito or a tick.

Malaria in the Netherlands

Our country has certainly suffered from mosquito diseases in the past. Malaria originated here and was transmitted by the mosquito Anopheles maculipennis. The mosquito brings the unicellular Plasmodiumparasite (not a virus) that causes the disease. Malaria was successfully eradicated between 1945 and 1955. The chance of the disease reestablishing itself here is very small.

Mosquitoes and ticks must drink blood from hosts, such as humans, birds, cattle or deer, to reproduce. With each bite, they can spread a pathogenic virus, bacteria or single-celled organism from one host to another. As many as 106 vector diseases are exacerbated by higher temperatures, more precipitation and flooding. What does this mean for the Netherlands? Koenraadt is collaborating with researchers in the One Health PACT project to understand mosquito virus disease outbreaks in relation to climate change.

When it gets warmer, the ubiquitous house mosquito can spread the West Nile virus better and faster.

Featured by the editors

Toys with a scientific touch

One of the diseases of concern to researchers such as Koenraadt is West Nile fever, caused by the West Nile virus. This virus is native to tropical Africa, but established itself in the United States in 1999. “Within a few years, the virus spread from east to west, with thousands of infections,” says the researcher. In Europe, the disease occurs in the south around the Mediterranean and central to Germany. Two years ago, the virus was first discovered in the Netherlands in a bird (a warbler), then also in mosquitoes and in eight patients from the same region around Utrecht. Infection leads to flu-like symptoms in one in five people, and only one percent to serious illness, such as meningitis or meningitis and paralysis. In the US, 100 to 200 people die of the disease every year.

The strange thing is that the virus is spread by, among other things, the Northern house mosquito, a mosquito that occurs everywhere in the Netherlands. Why do we only now suffer from the virus when the mosquito is already flying everywhere? “The virus is advancing because the house mosquito can spread it better and faster when it gets warmer,” explains Koenraadt. “The Dutch summer is on average too cold, but the warmer it gets, the faster the virus can spread.” 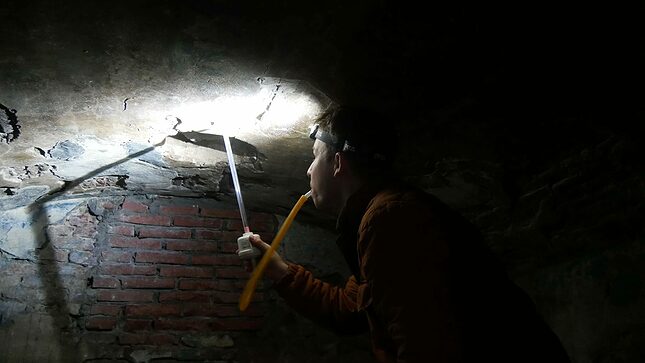 PhD student Rody Blom of the One Health PACT project collects hibernating mosquitoes in a cellar for research into the West Nile virus.

Moreover, after mild winters, there are more mosquitoes. “The house mosquito goes into hibernation, for example in cellars. The longer it stays warm, the longer the season they are active. And with a mild winter, more mosquitoes survive and you start the new season with a larger population.” Due to climate change, the West Nile virus has the wind on two fronts. 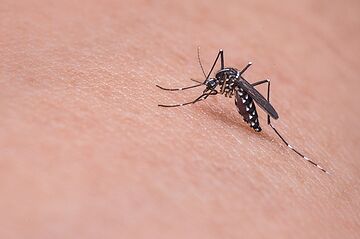 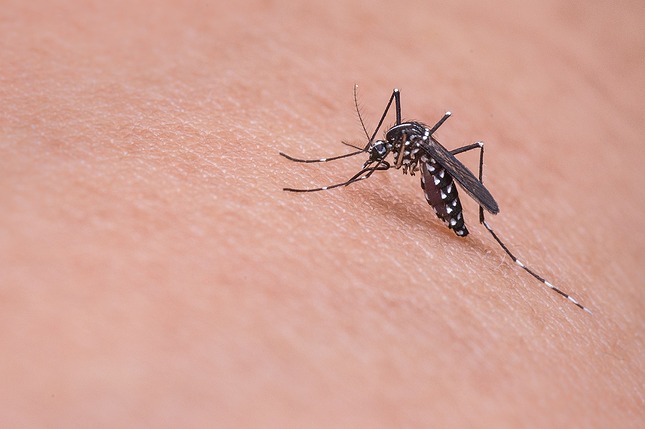 In addition to new viruses in Dutch mosquitoes, there is an exotic mosquito that is conquering Europe due to the warmer climate. “The tiger mosquito came from Asia to Italy in the early 1990s and is expanding to the north every year,” says Koenraadt. “The worrying thing is that this mosquito can spread a large number of tropical viruses that were not present in Europe until now.” No fewer than 22 different viruses, including dengue, yellow fever, and the chikungunya virus. There is a good chance that these viruses will show up in Europe, partly due to global tourism. A Frenchman returns from vacation from the tropics, is stung by a French tiger mosquito that picks up the virus and passes it on to subsequent people. There was such a local outbreak in France this year, and there have been outbreaks of chikungunya in Italy. “What happens in Southern Europe has predictive value for our country,” says Koenraadt. “In 10 or 20 years, this could be the scenario.”

Eline Boelee’s team will try to make these predictions in the coming years. She is an expert advisor on water and health at the Deltares knowledge institute and collaborates with Sander Koenraadt in the One Health PACT project. “We look at the ecological changes in the water and soil landscape and we relate that to mosquitoes and birds,” says Boelee. “In the future, we also want to include people’s travel behavior in our scenarios.” 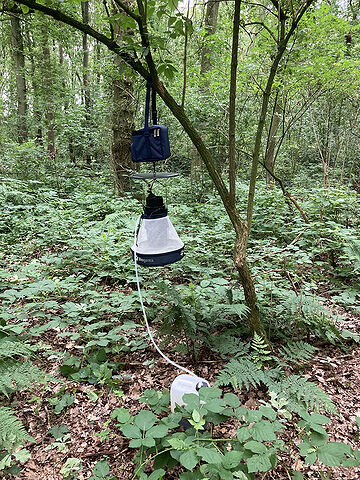 With mosquito traps like this, researchers monitor mosquito bites and their viruses spread throughout the country. 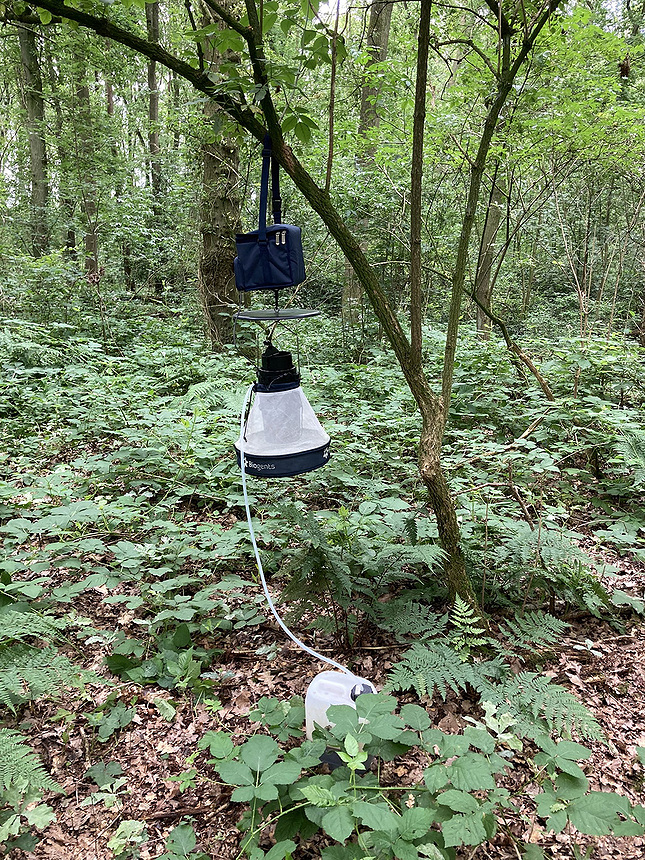 Building a predictive model takes a lot of time, but the process roughly has three phases. First of all, you have to understand what determines where a mosquito occurs, says Boelee. “We are making a model with which you can explain as well as possible why there are more mosquitoes in one place than in another. For this we use data such as the temperature of the air and the water, the degree of vegetation, nutrients in the water, and the salinity of the water.” Mosquito larvae are aquatic animals, and water quality therefore determines whether a mosquito can reproduce in a particular area. “You link those factors to the preferences of a mosquito species and then you get a map with the expected distribution of mosquitoes. You compare that with the numbers of mosquitoes actually found and from there you continue to improve the model.”

“We then release future scenarios from the IPCC and possible measures that people are taking to combat climate change,” continues Boelee. “In addition to warming, climate change in the Netherlands also results in soil subsidence. That means more water for mosquitoes, and on the coast it means saltier water in our river delta areas.” The researchers model four types of scenarios that they express in numbers for land use, travel behavior and climate, for example, and implement them in the mosquito model. “In this way, we can specifically turn the knobs in our model to predict the risks that specific scenarios entail in 2030 and a bit more uncertain in 2050.”

Finally, the models are sent to an epidemiologist from Wageningen University who predicts the possible outbreaks of diseases. Boelee: “It’s about the reproduction number, R0. If that goes above 1, you get a breakout. That outbreak has threshold values: a density of mosquitoes above X, in combination with bird species Y and temperature Z, creates a risk. Then we will look in our models where and when we get that density of mosquitoes.” At the moment, the Deltares models are still under construction, so it is still too early to predict outbreaks. 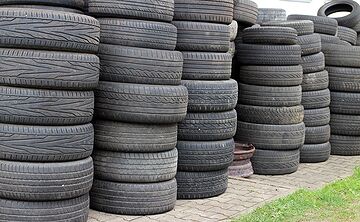 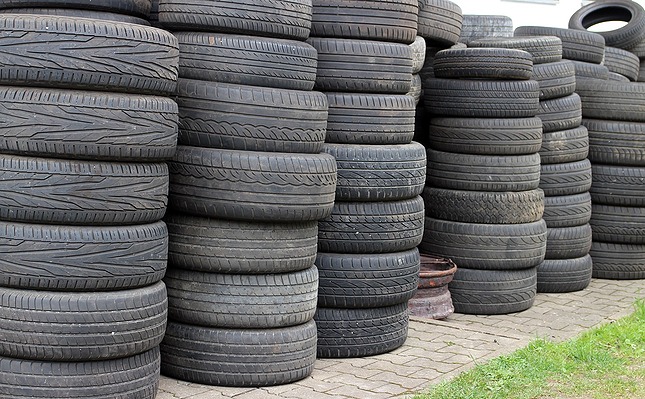 That the tiger mosquito is coming is certain – you don’t need a model for that. The species has appeared regularly since 2005, but is always controlled. The Center for Monitoring Vectors of the Dutch Food and Consumer Product Safety Authority (NVWA) keeps a close eye on things and monitors dealers in ‘Lucky bamboo’ plants and companies that import used car tyres. The mosquito was found there before. Mosquito eggs can be found in car tires. If they get wet from rain, they hatch. However, the control is not always effective, says Koenraadt. “Since the first discovery, it has been mopping with the tap open, because those tires keep coming in. Despite agreements with tire importers that they must stack and store the tires in a dry place, this is not properly observed.”

Researchers also keep a finger on the pulse of the West Nile virus, for example by collaborating with ornithologists. Koenraadt: “The West Nile virus needs birds. It is actually an avian disease that can spread to humans – a zoonosis. The mosquito is the bridge between bird and human.” The One Health PACT project has placed mosquito traps at several bird ringing stations around the country, and the researchers are now checking both birds and mosquitoes for viruses. Since its discovery in 2020, the West Nile virus appeared in a blue heron in North Holland last October, but it is unlikely that the virus will spread further in the autumn. Because the virus was found in both mosquitoes and birds in 2020, there is a good chance that it will still occur locally.

Under the mosquito net 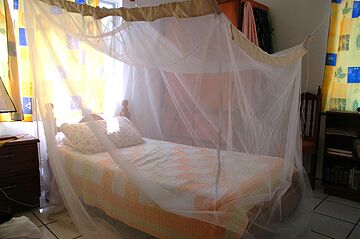 Sleeping under a mosquito net is an effective remedy against mosquito bites. 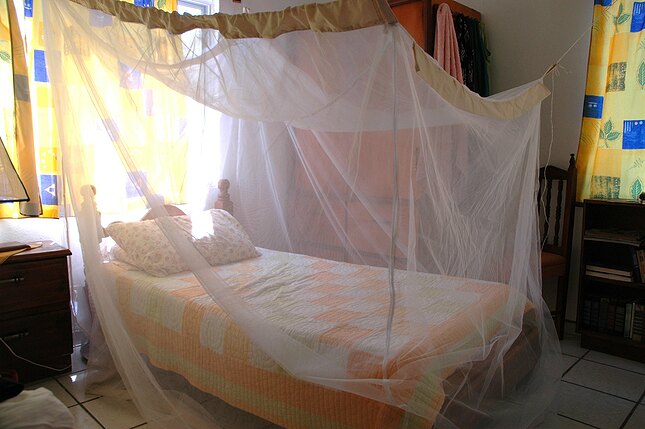 The West Nile virus is already in our country; for the tiger mosquito it seems only a matter of time. The question then remains what can we do about it? You can prevent mosquito bites with a few practical measures, says Koenraadt. “The emphasis is on prevention. The house mosquito is nocturnal. If you sleep under a mosquito net, you have a small chance of getting mosquito bites.” Screens on windows and doors help keep insects out. Applying DEET and wearing clothes with long sleeves and legs also prevent mosquito bites. Boelee also sees a role for the monitoring system at the bird stations: “If an infected mosquito or bird turns up in the monitoring, people can be warned locally to take measures.”

Another strategy is to clear the possible breeding grounds of mosquito larvae: stagnant water. Many breeding grounds are located around your house. If you cover the rain barrel or turn that empty flower pot upside down so that there is no water in it, you can easily combat mosquitoes, says Koenraadt. In the meantime, researchers are working on vaccines against the viruses. Recently, virologist Sandra Abbo of Wageningen University obtained her PhD on two candidate vaccines against the Zika virus and Mayaro virus, both spread by mosquitoes. However, there is still no vaccine for humans for West Nile virus and no specific medication. So it is best to avoid being bitten.

Although we will undoubtedly suffer more from mosquito and tick diseases with climate change, you can continue camping without getting sick with some extra luggage. I’m going on a trip and I’m taking with me: a mosquito net, DEET, and a blouse with long sleeves. And a newspaper – for the latest news about the vaccines, and to swat that mosquito in the tent at night.