No green pass, 4 thousand at the Circus Maximus in Rome: one of the leaders denounced. Tensions in Milan, 2 suspects and 257 filed

Are approximately 4mila, most without bezel, and sing the usual chants against the government and the restrictions related to the coronavirus. It’s another Saturday of protests no green pass what started a Roma, where thousands showed up for the sit-in Let’s free Italy al Circus Maximus to the cry of “freedom, freedom”, “hands off the children” and “people like us never give up”. During the checks that preceded the event, the complaint for one of the leaders, Nicola Franzoni, who had long ago received the expulsion order from the capital. Also to Milano groups of demonstrators, not too numerous, tried to reach piazza Fontana e Piazza Duomo armored by the police who blocked, identified and in some cases put some present in a state of custody. They also occurred moments of tension when a couple of hundred demonstrators attempted to enter the squares.

Rome, the No green passes are back to demonstrate: about three thousand people at the Circus Maximus. On social media they announced: “A million in the square”

Sit-in at the Circus Maximus, the doctor no vax: “We are many, someone should worry”
Among the tricolor flags, one of the Kingdom of the Two Sicilies and a banner for Trump. One of the demonstrators displays a banner depicting the Madonna caressing a newborn sleeping on the world. “I brought it to protect everyone – he says – I am the only unvaccinated in the family”.

And on the stage set up for the occasion, the recently suspended doctor no vax also takes the floor, Mariano Amici, which challenges the government from a distance: “Given the number of participants here someone should start to worry.” And then he started with a series of negationist invectives and based on unproven principles: “We were made to believe that this disease called Covid was like the plague but it is not true. A theater based on absolutely unscientific assumptions. The numbers are not real, the swab is not a reliable tool and above all it is not a diagnostic tool. The government is not interested in the health of citizens, but is interested in showing that there are dead to govern in a dictatorial manner. All the dead are counted as Covid “.

Even the orange vests and the former general Antonio Pappalardo were present at the demonstration: “Tonight a new movement is born that must oppose this regime – he said – We must be united because the enemy is too strong. A leader must choose the people and not Mattarella. In my house this is not democracy but it is one vulgar dictatorship. There has to be a movement that says’ now you have to go home ””. 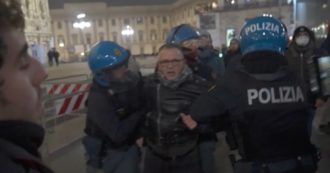 Milan, No green pass return to the square. Two hundred try a procession towards the Duomo, moments of tension with the police

During the checks carried out today, Nicola Franzoni, leader of Popular Wave, entrepreneur of Lerici promoter of various events in the capital and of the social group “March on Rome” against the green pass and vaccines. According to what is learned, Franzoni, who had a pass from Rome, was stopped for a check this morning on the Salaria while he was in his car.

Milan, Piazza Fontana armored: demonstrators identified
Also in Milan the usual protest of the no green passes returns, who have again tried to reach Piazza Fontana and Piazza Duomo, the starting point of most of the parades that have characterized these months of protests. Squares armored by the police who lined up the demonstrators after identifying some, after even moments of tension. Some No pass militants tried to resist and were stopped by the police, while about sixty have been registered so far. Large presence of law enforcement agencies also in Piazza Duomo, objective among those considered sensitive to the manifestations and that the Viminale decided to make it inaccessible.

At the end of the day, they are 257 people identified, while they are two Milanese to be investigated in a state of freedom: a 57-year-old per resistance to public officials and a 62-year-old for stamina and for having refused to provide his personal details. They were also imposed 49 administrative sanctions per occupation of urban areas, issued 31 removal orders and the procedure for the issue of two Daspo Urbani by the commissioner.

In Turin also the ports of Genoa and Trieste
There are also about thirty dockers of Genoa, e Stefano Puzzer, spokesman for the dockers of Trieste, at the no green pass event that is taking place in Piazza Castello, the only place in the center of Torino authorized for events. Thousands of people gathered for the umpteenth Saturday to protest against the green certificate and the government’s policies for containing the pandemic. “This beautiful square proves that the people are alive. Numbers are very important. I am not a hero, I am a worker like many others but, if I can give hope to people, I will do it until the end – said Puzzer – We with the workers of Genoa and Trieste were the spark, but in twenty days we understood that you are the fire. We see more and more hope and living eyes that have become aware. The government is in trouble. Now we will move on, the truth is coming out and they cannot stop it. I arrive from Milan where doctors and scientists met to form a scientific committee that will discuss with the Cts. From tomorrow the level will be higher “.

READ Also:  Channel Five announced the recognition of the detainee in the Leningrad region in cannibalism - RBK

Bologna, a thousand in the square
Another Saturday in the square in Bologna for the no green pass and no vax protesters. A thousand people, after gathering between piazza del Nettuno starting at 4.30pm, a procession with slogans and banners began. Without wearing a mask, they marched through the streets of the center singing choruses against Mario Draghi and against the obligation to vaccinate.

This week’s real estate deals: 4-room apartment in the prestigious neighborhood of Netanya

Rabbi Eliyahu: A great force is coming to...