“No smartphones or tablets for children under the age of 14” – time.news 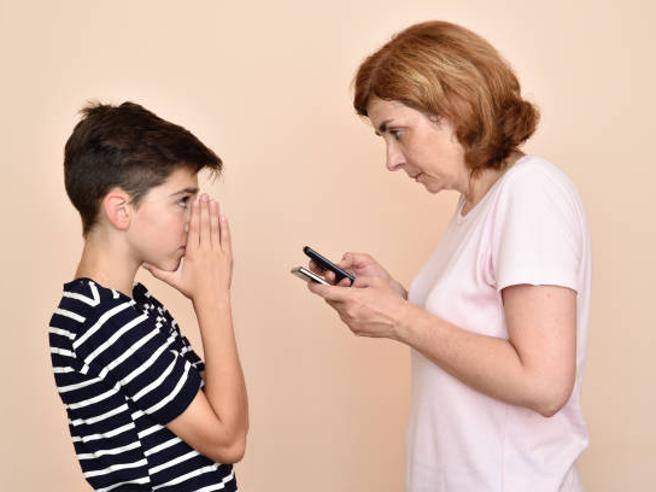 The book of a psychotherapist and a psycho-pedagogist: «We take one thing from the little ones to give them many others and we save their innate tension towards the outside world. Video games? They look like the land of toys “

It sounds like a provocation, but it’s not. Forbidden to children under 14, by Alberto Pellai and Barbara Tamborini (De Agostini, coming out on September 7), is apparently a textbook by mission impossible. Based on an idea as simple as it is revolutionary: giving your children a mobile phone only after the eighth grade exam. Pellai is a doctor, developmental psychotherapist and researcher at the Department of Bio-medical Sciences of the University of Milan. Barbara Tamborini, educational psychologist and writer, is his wife. They have 4 children, aged 12 to 21. In addition to addressing other parents, they tell a personal experience: a quality of the book that shines through from the first page. The two authors speak bluntly of “educational emergency” and in the book they summarize it as follows: “Hyperconnection imposes a gap between parents and children ahead of time, without all the stages of the process being respected”.

Doctor Pellai, how do you tell a child that he will have a cell phone after eighth grade when presumably all his classmates have had one since first (if not elementary)?


“First of all, parents need clear ideas and authority. You can even go back if a child under 14 already has a smartphone. The concept is: I take one thing away from you, but to give you many others. Which? Advanced educational projects, activities, face-to-face relationships, peer group (peers) meeting live and not via a screen. The goal, even more important in a moment of pandemic and temporary limitations of personal movements, is to keep active the predisposition to “outside”, the desire to see friends. Unfortunately, the smartphone, by its nature, reduces this innate attitude. The hope then is that the child is not the only one in the class who does not have a cell phone, but that other parents join the project, with a new awareness ».

“Until that age, the brain is at the mercy of its emotional side. Let’s think of Pinocchio: he is a good “child”, but when he meets Lucignolo he has no doubts and follows him in the land of toys. The three years of middle school are characterized by great fragility and vulnerability, one is attracted to what offers immediate gratification. The so-called cognitive brain, able to tolerate frustration, develops later, between the ages of 14 and 16. That’s why it’s important to train our kids in the real-life gym. After the lockdown, when the outside world reopened its doors, it was seen that the guys with the most difficulties had completely lost that training that day after day, albeit with difficulty, keeps us engaged in relationships. Real needs are being razed to the ground by addiction to the Internet, social media, the virtual. We could find some similarities between videogaming and Pinocchio’s Toyland. Another book written with my wife is called The Age of the Tsunami. How to survive a preteen child. Here, we must understand that it is a very particular and decisive phase in the life of our children ».

Would specific legislation be needed to protect children from the abuse of smartphones and screens in general?

“In the real world, many things are off-limits to minors, for example driving a car. On the Internet, on the other hand, everything is accessible, even if formally there are limits. I would consider it wise to introduce an age threshold by law: before the age of 14 children should not have their own smartphones or tablets: they can use them and access the Internet, but always at home and using their parents’ devices. Moreover, the tendency to carry out the term papers requested by teachers by copying texts or images on the Net is spreading. clicks. Then clearly the laws are not enough: there needs to be awareness in the adult world, but I don’t think it is impossible to spread a new vision among parents ”.

Where could one begin?

«Let’s think about the history of tobacco: in the last century it was forbidden to say that cigarettes were bad, marketing had absolute power. But then the battle for health was won and now we all know that smoking is a huge risk factor for very serious diseases: it is even written on the packaging. Here, just as smoking heavily affects the well-being of our organism, in the same way the early and indiscriminate use of screens sculpts the brains of our children in an unhealthy way, not beneficial for the purpose of their being in the world. Cars are useful, but also very dangerous if misused: this is why we have created a highway code. The same should be done with the Internet, technological devices, social networks: extreme evils, extreme remedies. We only think about porn revenge, for a few years the subject of specific legislation: it is a phenomenon that we did not know, born exclusively from virtual experience. There is no need for alarmism, but we “adults” must enter the territory of the online connection with a strong educational awareness ».

What do you think of distance learning?

“I’m just saying this: let’s not give up on school in attendance. We do everything necessary to avoid further closures ».

Her last daughter is 12 years old: I guess she doesn’t have a smartphone.

“That’s right, as proposed in the book, our children only get a personal cellphone when they are 14 years old. For them it is not a trauma: indeed, among the parents of the school others have decided to follow our example. Sometimes we adults act automatically, but it is enough for someone to show us a different point of view to start a change ».

Alberto Pellai, 56, is the author of many books for parents, educators and children. In addition to “Forbidden to minors under 14”, he wrote “All too early”, “Girl R-evolution” and, together with Barbara Tamborini, “Fathers come from Mars, mothers from Venus” and “L ‘ age of the tsunami », all published by De Agostini. Among the latest titles published, “Life is learned”. In February, Pellai and Tamborini’s “Noemi nella tempest” was released, a novel for children between 7 and 12 years old that talks about the fears and challenges experienced by two preteens during these months of pandemic. “A book to be read at school and in the family – remember the authors -, to give word to what still needs to be crossed and elaborated”.

Iran: in support of the demonstrations, Iranian footballers wore a parka and hid their shirts
Posted onSeptember 29, 2022