On lighting in Viznitz: Balorite husbands who will not go to the Rebbe 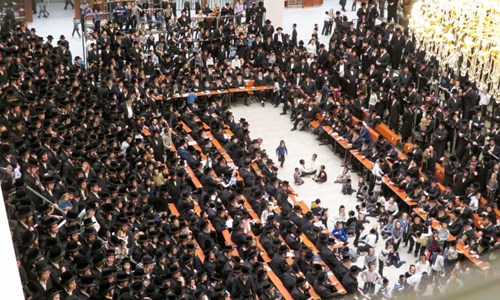 “Anyone who has a ‘Blurit’ who will not go to the Rebbe to receive Hanukkah money.”

At the end of the lighting ceremony tonight (Tuesday) at the Great Beit Midrash in Kiryat Vizhnitz in Bnei Brak, the Chief Gabay, Rabbi Shaul Greenberger, announced an instruction on behalf of the Rebbe.

The GSS dramatically declared: “Because anyone who has a ‘Balurit’ who will not approach the Rebbe to receive Hanukkah fees.”

Behadrei Haredim learned that Lithuanian and Sephardic boys went without a hat this week to receive ‘Hanukkah Gelt’ (Hanukkah fees) from the Rebbe, and the Rebbe who was afraid of blurry (because it is a tefillin buffer) wanted to announce it.

As is well known, in the Stiblach ‘Beit Hillel’ on Givat Pinchas Street in Kiryat Vizhnitz, hangs a large sign with regulations, under the heading “Words of Peace and Truth.” And one of the regulations is, that anyone who grows a bulrush will not approach in front of the box.

In the past, Behadrei Haredim reported on a Lithuanian guy who approached Rebbe Moiznitz in the middle of the street to ask for a blessing.

On the eve of Hanukkah three years ago when the Rebbe came to a special prayer in the Western Wall tunnels in front of the Temple Mount, and hundreds of people prayed at the Western Wall to be blessed, the Hasidim did not let anyone approach, one Lithuanian or Spanish guy urgent.

Let him approach, he claimed to the Rebbe, that a while ago, he asked the Rebbe for a blessing for some salvation and the Rebbe assured him that it would only take place on the condition that he take the “bulge” out of his head, now he told the Rebbe to remove the bulb. The Rebbe said to him: “True, but I see she grew up back to you …” The Rebbe replied, and the young man asked the Rebbe what to do.

The Rebbe answered him: Every period, when it is great, you will take it down, and thus you will have salvation.

Argentina to investigate crimes against Rohingya in Myanmar

White House extends state of emergency due to...

Zoabi reveals: I voted against the recruitment law...

Baruch Dayan HaAmet: The distributor of the famous...

German lobbyists said about the threat to the...