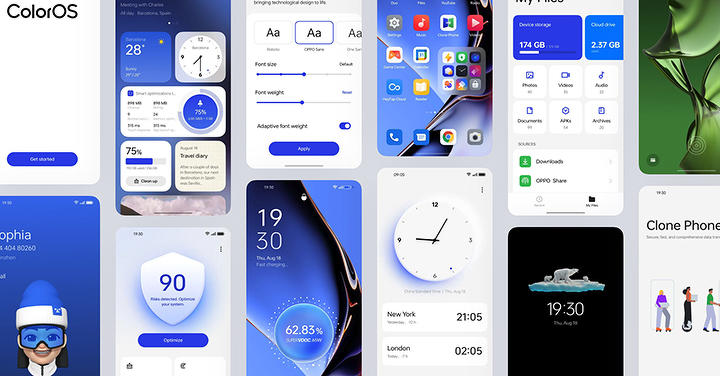 With the official launch of the Android 13 system, other manufacturers will also carry out their own upgrade plans. OPPO, which has previously announced the beta plan, also officially released ColorOS 13 based on Android 13 yesterday, and also announced the update time of its products. Table, the flagship Find X5 series will be the first to update.

The overall interface design of ColorOS 13 combines the element design of water. Design Director Chen Xi said that “the natural water has injected life into ColorOS 13.” Through more colorful and smart special effects, it brings vitality to the system. Icons and a card-style interface, ColorOS 13 also brings new fonts that are easier to read.

ColorOS 13 has strengthened the functions on the desktop. In the past, the programs of Android phones on the desktop could be stacked into folders, but ColorOS further enlarged the folders to display more programs, and can also be directly clicked to open. The system’s quantum engine is also again Upgrade to make system animations more interactive.

Cross-device use is also one of the key points of ColorOS 13. In addition to projecting the screen of the mobile phone to the computer, ColorOS 13 can now open multiple mobile phone programs on the computer, and can directly transfer files between mobile phones, tablets, and computers. According to legend, ColorOS 13 also inherits Android 13 to enhance the adaptation of different screen types, and in response to the increase in video demand, it automatically adjusts network resources and simplifies notifications, reducing interference to video, and enabling quick notes on the phone.

ColorOS 13 has also improved functions in the Always-On Display, which can display more important information, and the supported music players can also operate more functions. The integration of Bitmoji can simulate daily life with virtual dolls. “Homeland” The animation is based on polar bears, penguins and other animals, hoping to arouse users’ attention to environmental issues.

ColorOS 13 uses a dynamic computing engine, which claims to better allocate system resources and achieve a better balance between performance and power consumption. In addition, in the privacy part, ColorOS 13 can encrypt photos, videos, and files, and even screenshots have been added. Mosaic effect, if the content of the screenshot is a dialogue, the algorithm will automatically analyze it, and automatically code the interlocutor’s photo and name, which can share the dialogue content more quickly and secretly.

ColorOS 13 has been updated for OPPO Find X5 and Find X5 Pro after it was released. OPPO expects to push ColorOS 13 to 35 devices this year, and update more devices in the first half of 2023. However, the actual system update time will still depend on Regions and carriers vary.

The concern around Credit Suisse continues to grow
Posted onOctober 4, 2022