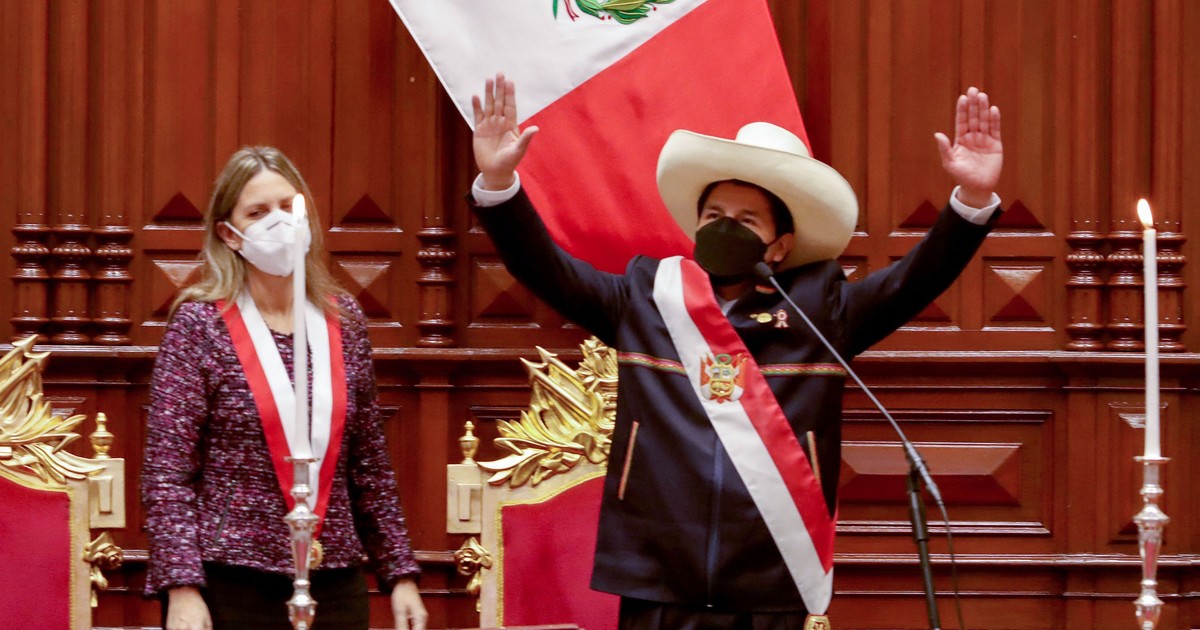 The presentation in the Peruvian Congress of a bill that introduces a new figure, the Constituent Assembly, this week became the first step of the governing party, Peru Libre (PL), to try to fulfill the promise of endowing the country with a Magna Carta to replace the “neoliberal” of 1993.

The author of the project, Alex Flores, said that the left-wing government of President Pedro Castillo is not part of this initiative because “it is dedicated to solving problems such as the pandemic or economic reactivation” but he clarified that there is no contradiction between the Executive and the ruling party.

Among experts there is skepticism: “I doubt very much that with the conflicting blocs (in Congress) this can prosper in the short term,” political scientist Roger Santa Cruz told Télam, for whom what the ruling party seeks is to place the issue on the agenda and generate debate.

In the northern department of Lambayeque, for example, there are already forums about it, with the presence of independent civil society actors or parties, and the same is beginning to happen in other places, Santa Cruz said.

In that framework, moreover, already there are mobilizations both supporters of change and defenders of the current Charter.

As the Constitution drafted and approved in the Government of Alberto Fujimori (1990-2000) does not include the possibility of a Constituent Assembly, a total or partial reform, at present, if the point is not revised, it can only be done by Congress.

According to pronouncements of the parties, at least 80 of the 130 congressmen flatly reject the creation of a Constituent Assembly, which leaves the ruling party in a minority in its idea of ​​creating the new body, used before on several occasions in Peruvian history.

In his inauguration speech on July 28, Castillo emphasized that the fight for a new Constitution It will be done within the channels of the current Magna Carta, with which he denied right-wing parties that accuse him of wanting to bypass Congress to call a referendum to form the constituent on the fringes of the law.

March in favor of Pedro Castillo in Lima. Photo DPA

“Rest assured that legality will never be made a clean sweep. Undoubtedly, to achieve this purpose (to do it from the Legislative Assembly) we will have to reconcile positions, because it will be here, in the house of the laws, where the laws will have to be approved. corresponding norms, “Castillo said in his inauguration speech.

According to the Government’s idea, the Congress would continue with the legislative and supervisory tasks and would coexist with an Assembly that, in Castillo’s words, “will be elected by the people. exclusively to prepare, within a predetermined period, a draft Constitution, product of the political debate and pluralist agreements, and which will be submitted to a referendum “.

“Once this commission has been fulfilled, it must be dissolved”, precise.

“Its composition (of the Assembly) must include, next to the candidates proposed by the registered political organizations, percentages of candidates from indigenous, native and native peoples; of the Afro-Peruvian people; independent candidacies from unions, popular organizations and civil society ?, proposed the president.

In its bill, the ruling party argued that the current Constitution “has an extractivist and rights-denial character,” which prevents governing for the benefit of the majority.

“It is urgent to refound the homeland, seeking consensus to obtain a legitimate constitutional text, whose birth arises from the popular will and guarantees a fair economy, both social and political, “the project pointed out.

During the campaign, Peru Libre and its now ally in the Government, Together for Peru, insisted on a new Constitution, especially in the economic chapter. However, they have not detailed the changes that would be proposed, as they would come from the initiative of the constituents.

The right-wing parties Fuerza Popular, Renovación Popular and Avanza País, which defend the current Carta as the one that supposedly put order after the vortex of violence and economic lack of control of the 80s and 90s, assure, on the other hand, that Castillo, who they call “communist”, seeks to impose a legal framework that limits political and economic guarantees.

Likewise, center-right parties that have become the faithful of the balance in parliament, such as Popular Action and Alliance for Progress, they also reject the change of the Magna Carta.

According to a national survey by the Institute of Peruvian Studies, 23% of voters want a new Constitution, while 18% demand that nothing be touched to the current one, drawn up by a Constituent Congress – with a double function – controlled by Fujimori.

In the middle of these two positions, 58% want there to be reforms, but not a new Constitution.

Flores, whose bill will follow the corresponding path in Congress, proposed that, in order not to generate new expenses, the referendum that would define the Constituent Assembly, with the permission of Congress, be held together with the departmental and municipal elections, in October of next year. .

For the first time… Adel Imam breaks his silence about a rumor that he has Alzheimer’s
Posted onSeptember 25, 2022