Last night (Thursday), Adir Getz went up to perform (for the first time in his life) in “Hangar 11” with the best of his greatest hits over the years, and in front of an audience of about 2,000 people who enjoyed singing, dancing and roaring to its sounds.

The show, which began about an hour late, opened with “songs we screamed in the car” – an opening that proved to be excellent and accurate for the evening. Getz then performed “Again Coming” which made the audience sing wholeheartedly along with the singer who gave his soul.

One could not miss the hit “Just Like She” which he co-wrote with Tuval Shafir and Daniel Littman, it was also one of the standout songs performed during the evening and swept the audience who recited orally and roared at Getz the lyrics with pleasure.

One of the exciting moments of the evening was when he surprisingly hosted the promising singer Ilai Almkeys who burst into our lives in the latest “X Factor”. The two performed together miraculously “Scars” – the song that Almkeys performed on the reality show that garnered more than a million views on the networks. The combination of the two was perfect and proved that they must have an official duet together. Immediately after the joint performance, the beginning singer performed his debut song – “Last Episode”.

Getz continued the evening with a particularly excellent string of “LED in the Fields”, “Argentina”, “She is so beautiful”, “Red dress” and “It will still happen”. Immediately afterwards Getz went up for a hit session on the piano and flirted with the enthusiastic audience (rightly). The singer performed on the piano “Always Remaining” which he wrote to Eyal Golan that only from hearing the initial note was applauded – not to mention the wonderful performance, “I did not ask for war” (he wrote to Kobi Maman) which received a hug and passion from the audience, as well as the typical song “The Shy Guy on The Piano “- which has once again proved that Getz is one of the best composers and performers we have here. If you were looking for more proof of tonight’s star’s creative abilities, Getz went on to perform for the “millionaires” he created for Omar Adam and became a hysterical and prominent hit last year.

The evening ended with three insane performances for three big hits – “I wanted you to come”, “Ten-zero for you” and “A small apartment in Haifa” – we could not have asked for a more accurate ending to this evening!

In short, Getz is an artist who needs an even more recognition audience here and the mass audience that came last night just proved how much wonderful talent and huge accomplishment there is in one person. Getz knows how to give an Israeli show – one that is bouncy on the one hand and exciting on the other, one that knows how to touch the audience with such precise songs, with words that everyone can identify with and with lots of love, heart and soul. This was my first time at Getz’s show and I was thrilled! I knew about his abilities, but seeing it all on stage – just did good at heart. He knows how to flirt with the audience, he knows everything that needs to be done and given all this – it is impossible not to announce an amazing performance that only made you want more. 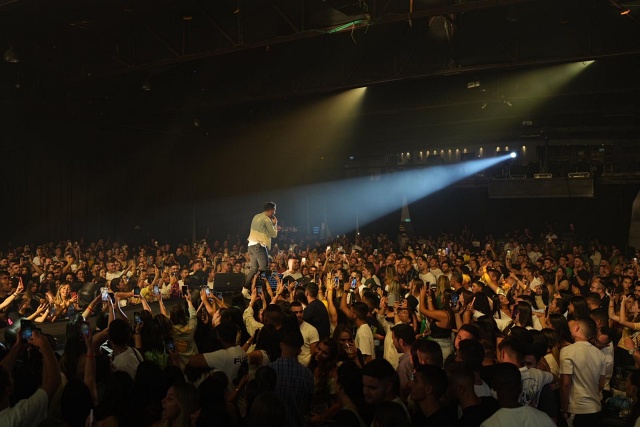