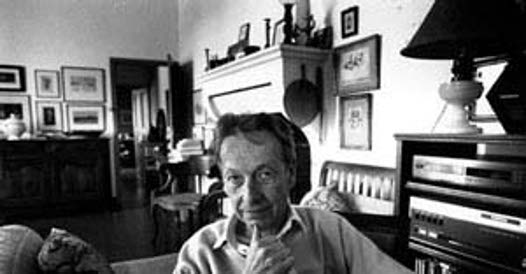 Several times he had been nominated for the Nobel Prize, had won the Goncourt Prize for Poetry in 2003 and was considered one of the greatest poets of the continent: Philippe Jaccottet, a French-speaking Swiss from the Canton of Vaud, died at 95, who from Moudon, where he was born in 1925, and from Lausanne where he had completed his literary studies, he moved after the war to Paris and then to the South of France, to Grignan, where he lived.

He was the author of poetry as a teenager – however he disavowed the first published works under twenty, like Three poems to demons, of which he said he had destroyed the copies as they came in front of him in the bookstore -, and after the Second World War he met Giuseppe Ungaretti, of whom he was a friend.

It was with the work of the Italian poet that a work of translation began who saw him very active (he also obtained the Grand Prix national de Traduction in 1987): he was an excellent translator of German-language poets, romantics such as Hölderlin and Leopardi, but also of great twentieth-century narrators such as Thomas Mann and Robert Musil (he also translated L’Odyssey of Homer).

He was closely associated with the French cultural environment: he was a friend of authors of his generation such as Yves Bonnefoy, Jacques Dupin, and of the “poet of things” Francis Ponge (also very far from his “human” and ethical poetics), and tied himself to the animators of the magazine “84”, André Dhôtel and Henri Thomas. In the 1950s he published his first important collection with Gallimard (1953), which came out in Italy by Einaudi in 1992 in the volume The Barn Owl. The Ignorant, curated by Fabio Pusterla.

Lyrical singer of the “transparent” beauty of nature, but also of its limits shadowed in death and pain, reflected his poetic research in the cleanliness of the word and in the clarity and simplicity of language. Among his books: Arie (1967, published in the translation by Albino Crovetto for Marcos y Marcos, 2000), In the winter light. Thoughts under the clouds (a cura di Fabio Pusterla, Marcos and Marcos, 1997), The darkness (edited by Gianluca Manzi, Fazi, 1998), Austria (edited by Fabio Pusterla, Bollati Boringhieri, 2003), And yet (a cura di Fabio Pusterla, Marcos and Marcos, 2006).

Among the most recent works, the memories between poetry, prose and diary of the volume The last ones noises …, released in January of this year by Crocetti (edited by Ida Merello and Albino Crovetto), and the Walk under the trees, which will be released on March 17 for Marcos y Marcos.

Despite the regime’s repression attempts – the protests in Iran continue
Posted onDecember 3, 2022

“Dr. Chiraruj” reveals that children with COVID-19 must go to ICU 100% without vaccination
Posted onDecember 3, 2022
Menu