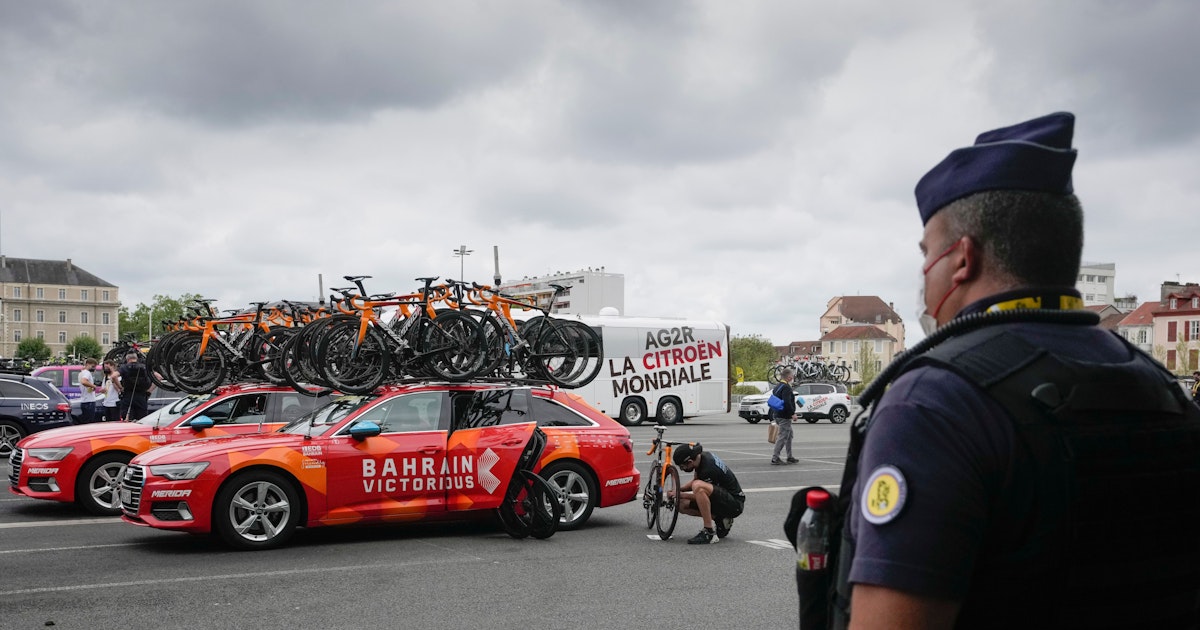 Pau – A police raid caused a moderate earthquake in the final week of the Tour de France. The French authorities searched the hotel of the strongest tour team to date, Bahrain Victorious, in Pau until late Thursday night on suspicion of doping. This was announced by the public prosecutor’s office in Marseille.

A preliminary investigation into the possible “acquisition, transport, possession and importation of a prohibited substance or method for use by an athlete without medical justification,” said a statement from the public prosecutor’s office. The process will continue to investigate the background.

The seven drivers left for the stage

Bahrain confirmed the facts but added that the reasons for the search were unknown. The team has “committed itself to the highest level of professionalism and compliance with all regulations” and will always “cooperate in a professional manner”, it said in a press release.

The seven remaining Bahrain Victorious drivers started on Thursday as planned for the 18th stage of the tour to Luz Ardiden. However, the Dutchman Wout Poels lost the lead in the mountain classification to the renewed stage winner and superior tour leader Tadej Pogacar from Slovenia.

“We pay the price for our performance,” said Sonny Colbrelli, who is currently third in the points classification. Such a raid would happen if you conduct intensive high-altitude training camps, prepare well and spend a lot of money, added the Italian champion: “If you get good results, something like this happens.”

The search was carried out by the police of the Central Office for the Fight against Violations against the Environment and Public Health (Oclaesp), the AFP news agency reported, citing a source close to the house.

“It wasn’t anything special, we had a visit from the police. They asked for the drivers’ training documents, checked the bus, and that was it, ”said team boss Milan Erzen to the specialist portal Cyclingnews. The drivers were “disturbed for an hour. You did not tell us what the reason for the visit was, but we will find out today through our lawyers. “

The driver’s and staff’s hotel rooms were searched and there were no arrests. According to information from the specialist portal, up to 50 police officers were on duty.

Team boss Erzen had to defend his team back in June after doping allegations were reported in French media after the recent strong performances by Bahrain Victorious at both the Giro d’Italia and the Criterium du Dauphine. “I’m not interested in what other team bosses say. He can tell anything he wants, ”said Erzen.

Erzen had already been observed in the past by the world association UCI for alleged connections to “Operation Aderlass”. According to the former Austrian cross-country skier Johannes Dürr, the blood doping practices of Erfurt sports doctor Mark S. were exposed.

The corona pandemic has made the fight against doping more difficult and has reduced the number of tests in cycling. At the beginning of June, however, the UCI had assured that the tests outside of competitions had “returned to a normal level”.