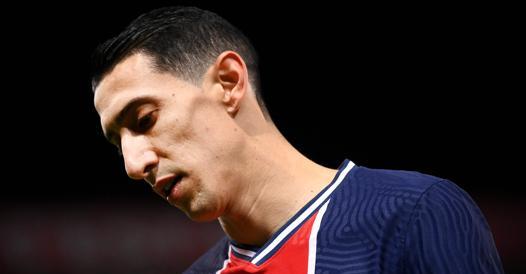 from our correspondent
PARIS – On Sunday evening at the Parc des Princes in Paris, Psg-Nantes was played, an important match to relaunch the team at the top of the league, four days after eliminating Barcelona in the Champions League. Fifteen minutes into the second half, at 1-1, the sporting director Leonardo approaches the coach, Mauricio Pochettino, and says something in his ear. Pochettino does not hesitate and recalls the Argentine champion Angel Di Maria from the field, replacing it. She accompanies him to the locker room and explains that just over an hour earlier, around 9 pm, some bandits broke into his villa in Neuilly while his family was at home.

Around 8:30 pm it was also touched, it will later be discovered, to the Brazilian defender of Paris Saint-Germain, Marquinhos: the bandits entered his father’s house, beating and threatening him. The game was then lost (1-2), but this is not the most serious aspect of the evening. The PSG champions, one of the richest teams in Europe thanks to the owners of Qsi (Qatar Sport Investments), they are the target of criminals – it is not yet known if coordinated – able to enter homes and endanger families.

In the case of Di Maria, which occupies a building just outside Paris, in Neuilly, the gang entered through the basement gym. On reaching the ground floor, the bandits took the internal lift and went up to the second floor, while on the first floor Di Maria’s wife, Jorgelina Cardoso, and their two daughters Mia (7 years old) and Pia (3) were watching their dad on television. . The bandits found the safe open and took away watches and jewelry for half a million euros, managing to escape undisturbed.

His wife noticed the theft when they were gone. The surveillance cameras did not record any images, investigators think they have been put out of action. It is not the first time that the Di Maria family is the victim of a robbery: had already happened in 2015 in Manchester, when the bandits entered while the Argentine champion was having dinner with his family. That trauma was one of the reasons that prompted Di Maria to leave Manchester United to join PSG.

The robbery of Marquinhos’ father’s home was more violent: in Chatou, not far from Paris, two men with their faces covered have entered the house and have beat the man, locking him with Marquinhos’ two young children in the walk-in closet. The bandits escaped taking some valuable bags with them. «At the end of the match we talked to the players, but not about football – said the coach Pochettino -. We also lost the match due to a sudden drop in energy, there are situations that need to be taken into account ».

After the robberies in January in the homes of goalkeeper Sergio Rico and Mauro Icardi (loot of 400 thousand euros) and those on Sunday evening, PSG has decided to protect the players by paying private guards from now on. The team’s security officer is Michel Besnard, former head of Nicolas Sarkozy’s escort agents when he was president, at the Elysée. Robberies in footballers’ homes are spreading across Europe: a few days ago it was the turn of Everton goalkeeper, Robin Olsen, victim of the attack by a gang armed with machetes, and in February of the coach of the same team, the Italian Carlo Ancelotti.

Armaments: a third of the largest manufacturers are now Chinese
Posted onDecember 6, 2022
Menu