Question and answer between journalist no vax and Gallavotti at La7. “Montagnier has been muddied”. “He has never done studies on vaccine efficacy”

Question and answer a “Tuesday” (La7) among the biologist Barbara Gallavotti and the journalist no vax Barbara Silenzi on vaccines and scientific information in the media.
Silenzi points the finger at “It mainstream”: “I’m talking about the big newspapers, TV, radio: unfortunately people have received a single thought and that is why people still tend to have reservations about vaccines today. The information was confused and often patched up. And especially the people called on TV have always been the same”.

Vaccini, Sgarbi blurts out on La7 and Zampa replies: “Everyone has to do their job. Honorable, you must be invited to talk about Masaccio “

Floris ironically replies: “I drop this book. Is gravity mainstream?”.
“No – Silenzi replies – I am referring to the fact that in the scientific field there are not only people who express themselves on TV, as so many virologists and so many doctors have done. There are many other people who have been doing it on the web in recent months, because they have not been listened to by mass communication channels “.
“There is no disagreement in the scientific community – Gallavotti comments – It is useless for us to continue to tell ourselves that there are scientists who believe that we should not be vaccinated or that the vaccine creates problems or is not useful. It is something that we keep repeating to ourselves to try to credit something that does not exist “. 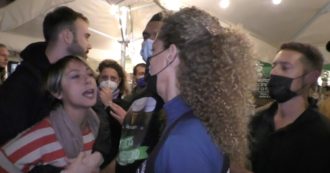 Rome, bartender attacked by No vax: “I’ll beat you up” and the police intervened. The outburst: “So every day, they look for the pretext and snap”

The journalist raises: “Nobel laureate Montagnier was muddied, just as there was a mud operation against an entire category “.
Gallavotti replies: “It is necessary to distinguish when a scientist or even a Nobel laureate who has made important discoveries like Montagnier gives a personal opinion and when instead a scientist speaks because he has carried out studies and reached conclusions. Montagnier has not done any studies on the effectiveness of vaccines for covid. Many others have done them. They are vaccines of which 7 billion doses have been used. Have we seen a death of people vaccinated or a death of people with covid?“.

Ennio Doris died during the night, farewell to the founder and president of Banca Mediolanum. Berlusconi: “Great Italian, I’ll miss him a lot”

Another blow: Apple is suing the Israeli NSO

Horowitz on the new variant: “The matter is...

“Current vaccine against omigran corona may be ineffective”...

Belenenses, the Portuguese club takes the field in...

After the confrontation with Bennett, Avidar attacks: “We...