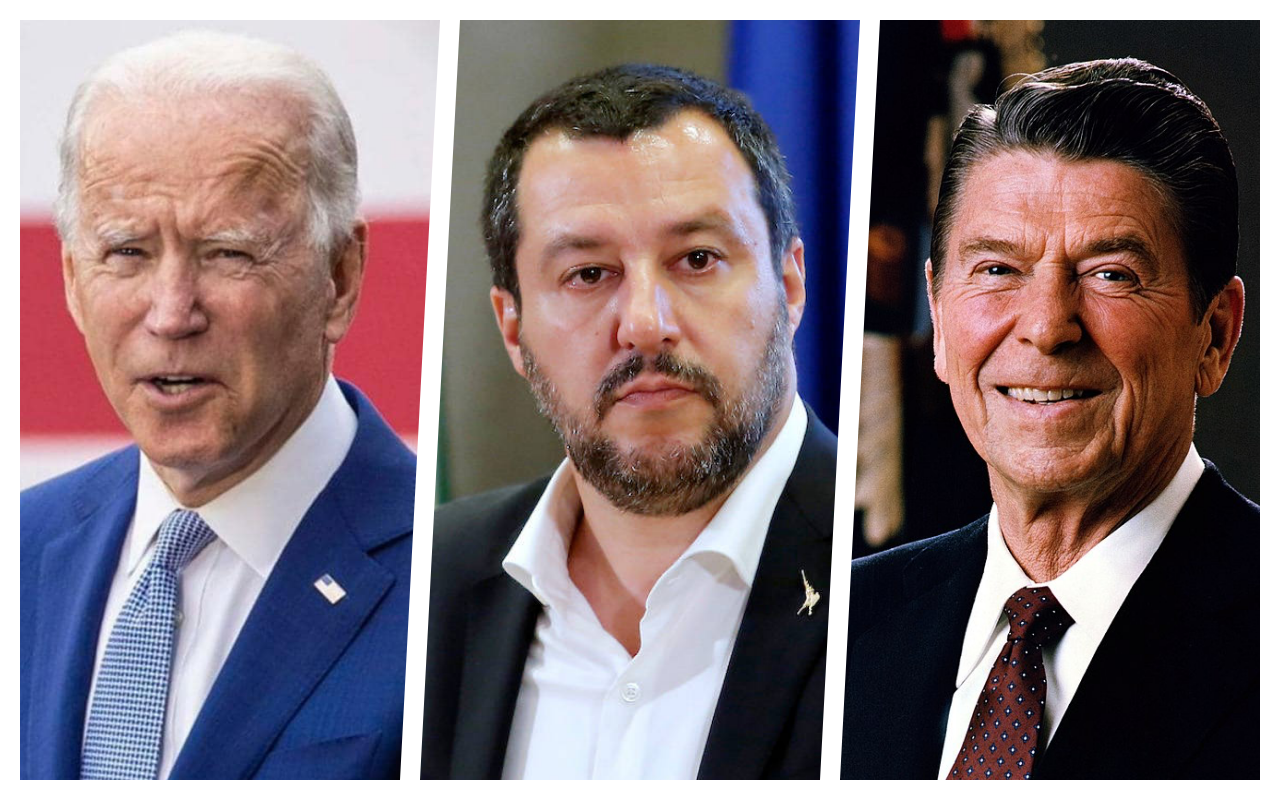 At the presentation of the book by Tg2 director Gennaro Sangiuliano, “Reagan. The president who changed American politics ”(Mondadori), the leader of the League admits: on some things better than Biden than Trump, isolationism is not good. And launches the Reagan program at the next polls, “let’s start with the flat tax”

“Yes, there is something where Biden is better than Trump.” Matteo Salvini he really said it. At Palazzo Brancaccio, on a torrid Roman afternoon, the audience, a little stunned, witnesses the conversion of the leader of the League on the way to Joe.

“The spokespersons for freedom need not retreat to their borders. Biden’s return to international leadership is better than the flight of the Trump administration ”, he adds. And to think that the enlightenment comes during the presentation of a book dedicated to a Republican icon, “Reagan. The president who changed American politics ”(Mondadori), the latest editorial effort by the director of Tg2 Gennaro Sangiuliano, a biography full of unpublished anecdotes of one of the most beloved tenants of the White House.

Yes, says Salvini, he is a reference for the Lega and the Italian right. “When they call me a conservative to insult me, they do me a favor”. Il Carroccio looks at the United States, “for any liberal and democrat I am a point of reference”, but in the universe of Northern League references, the sovereign Trump has given way to the liberalist Ronald Reagan.

Here is also the change of pace of the League at the time Mario Draghi. After all, Sangiuliano says, quoting Prezzolini, “the progressive is the man of tomorrow, the conservative of the day after tomorrow”. Here then is the memory of the “boy from Main Street”, forty years after his election as president and one hundred and ten from his birth, becomes the pretext for a center-right manifesto in the next elections, hoping for a “coalition more homogeneous than the one we are making he is part of this moment with dignity ”.

“The state must be as less invasive as possible in private life – says Salvini in front of a room full of famous faces of Italian politics and journalism – the flat tax will be the first reform we will offer to our country”. But the state must take a step back across the board, starting with the restrictions for Covid, thunders the League secretary, reopening the battle on the green pass. “I hope there are no draconian, sudden, unweighted choices that exclude the majority of Italians from the right to work, to move”.

Salvini’s opening to Biden and the US democrats, urged by questions from the director of Ansa Luigi Contu and by the journalist of Tg2 Giuseppe Malara, however, is not explained only by a rethinking of the old Trumpian passion. The truth, Sangiuliano notes, is that on many issues dear to the League, the US president has fished out some workhorses of the old administration.

“Biden is continuing Trump’s policy, in a different style. He hasn’t touched on Trump’s tax reform, because he knows it comes in handy. And on his trip to Central America Kamala Harris told migrants not to come to the United States for any reason. With one difference: now on the wall with Mexico the cameras have been turned off. So the policemen can continue to bat ”. Even the withdrawal of troops from Afghanistan, the director recalls, is nothing more than the completion of a path initiated by Trump, “a serious mistake”.

With Reagan, however, there is also an ideal thread. “It is no coincidence that Biden mentioned him in his latest speech on the restart and the infrastructure plan”. Like the former Republican president, Biden can go down in history as the president of reconstruction.

Then there was the collapse in Saigon and the inflation crisis, today the pandemic and an economy to get back on its feet. On the international level, the political, economic and value challenge with an enemy power. Reagan, he said Margaret Thatcher, he won the Cold War with the USSR “without firing a shot”. Today, Salvini says, “I hope that the director Sangiuliano is right, that Europe, the United States, Western freedom will be able to stop China’s advance”.