Real Estate in the GDR: The Precious Legacy of Eastern Modernism 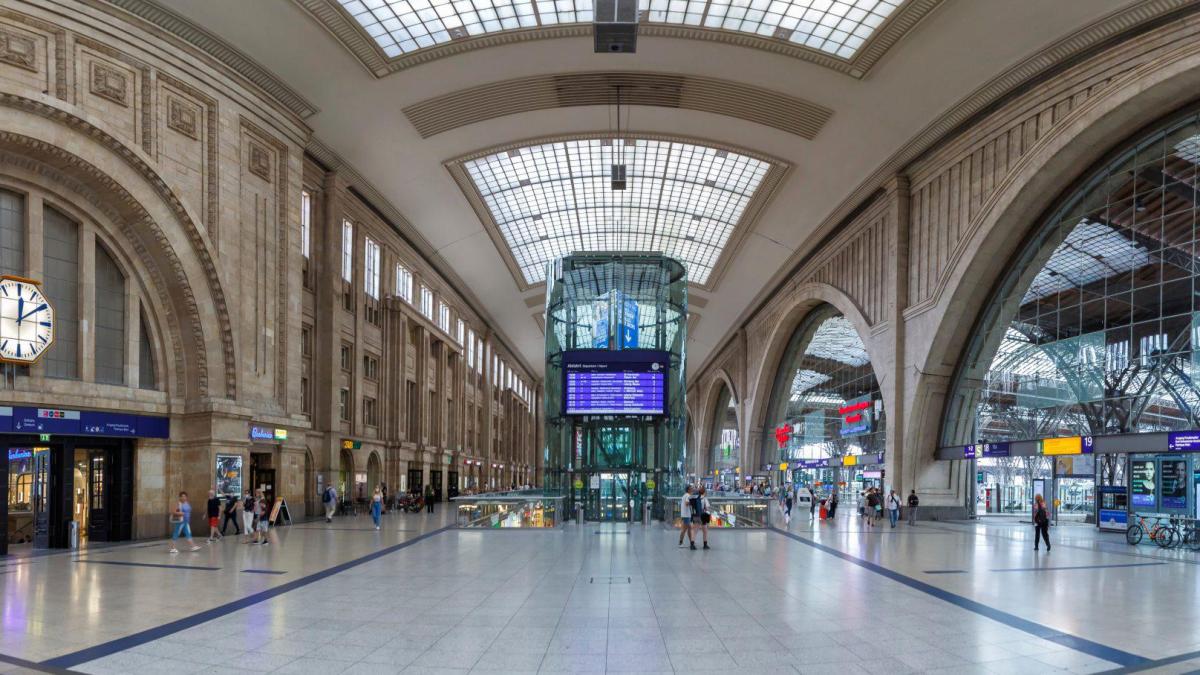 In the last twitches of the GDR state, the people finally dared to openly criticize their functionaries. For example, a report on GDR television has gone down in history in which construction workers in Leipzig criticized the construction minister of the workers and farmers state, Wolfgang Junker, in an unheard-of way.

“We construction workers have not seen our minister for years, only when we drive through to the exhibition center,” they scolded the camera. Instead of building, they would be used as demolition columns to tear down dilapidated houses. Leipzig’s old buildings were on the verge of collapse at the end of the 1980s.

The reporter Ruth Geist-Reithmeier documented the situation and showed perforated ceilings, soaked walls and destroyed roofs. “Can Leipzig still be saved?” She asked in the report – which was broadcast on November 3, 1989, after hundreds of thousands once again took to the streets at a Monday demonstration in Leipzig and called for reforms.

In a phase of the building boom, Leipzig had grown rapidly before 1918. More than 100,000 Wilhelminian style buildings were built. Until the war the stock was expanded, Leipzig was a city of culture – Goethe, Schiller and Nietzsche had praised it.

But in 1989 most of the residential buildings were no longer habitable, even though the city had not been bombed across the board. The GDR government had not managed to maintain the objects, many were without any repairs for decades.

What has been forgotten: There was a short phase in which the still young GDR and its citizens showed an interest in preserving, reconstructing or at least replacing old building fabric with a related building typology. For some parts of the old town or individual buildings, this period between 1948 and the end of the 1960s was the salvation.

The artistic and urban significance of this construction phase has now been recognized by experts. Architectural historians classify them in the post-war “building industry functionalism”, while others emphasize the orientation towards classical modernism.

And today Leipzig, but also Rostock, Greifswald and Dresden are benefiting from these years of “Eastern Modernism”. The Nikolaiviertel in Berlin is also one of them. The GDR buildings of the 1950s support the cityscape, for many people today the buildings are part of the DNA of the central locations.

The motives of this East Modernism were unglamorous and unideological. The aim was to quickly carry out some repairs, fill in gaps and restore the destroyed urbanity. There was a lack of apartments, Dresden and Chemnitz reported a clear-cut balance of up to 80 percent at the end of the war.

In order to regain living space quickly, architects resorted to objectivity and, often for financial reasons, to simplicity. “No type construction, even if some type elements were used,” says the Dresden expert Matthias Hahndorf from the TU Dresden, who sees himself as an activist of Eastern modernism. “The architects wanted to create something special.” Today, Hahndorf registers that interest in eastern modernism is growing.

In the relatively short period, urban planners and architects had a certain amount of freedom. When rigorous prefabricated building planning was introduced in 1973, the renewal of the old building was over. It was left to decay, demolished and cleared away. A bitter end for the previously recognized bourgeois culture.

During the reconstruction in the early post-war years, Leipzig had brought back the old stock and revitalized it as long as it was possible. This happened in accordance with tradition, people built like their fathers and the historical structure was preserved on the old town plan.

The people of Leipzig also owe this to the Soviet military administration, which started building work in 1946 – to revive the more than 700-year-old Leipzig Trade Fair. Leipzig was very lucky with Augustusplatz (then Karl-Marx-Platz), which already existed and could be used for prescribed mass rallies. In other cities, historical buildings were therefore brutally demolished.

The first new buildings of East Modernism in the 1950s were still dominated by Stalinist monumentalism, but Leipzig’s development around the Ring – the historical core of what was then the fourth largest German city – and on Rossplatz with the neo-classical ensemble of the German University of Physical Culture showed references to bourgeois building culture .

The old and new town hall rose from ruins, the central exhibition palace and the main train station, which is considered to be the most beautiful terminus in this country, and the popular Gewandhaus were rebuilds. All in the style of modernized historicism.

It’s amazing what Eastern Modernism achieved. In Greifswald, a research project of the East Berlin Building Academy was carried out in 1970: In the city center, groups of houses were built on the city plan in the typology of the gable-side Hanseatic structure, while prefabricated buildings were already stacked up like a wall on the outskirts of the city center. One of the gable buildings on the market square was actually rebuilt in 1959 – even if the stepped gable is not considered to be entirely authentic – and is one of the most popular photo motifs today.

In Rostock, the long-time city architect Michael Bräuer still managed to prevent prefabricated buildings in the center in the 1980s. Between the northern old town, the market and the old port, historical buildings were largely renewed. Today they shape the city of Rostock.

The now 77-year-old owes this to an idea he spontaneously told the operator of a demolition excavator. The centuries-old monastery stones were to be saved in order to attach them to remaining architectural monuments. Bräuer told the man “that he will get 50 pfennigs from us for every brick we recovered and cleaned”. The excavator operator organized women and children for the weekend: “They sorted bricks all day.”

New interest in the legacies of Eastern modernism

In the meantime, young preservationists from East and West are showing an interest in legacies of post-war modernism. They protested when a holiday hotel in Klink an der Müritz was demolished, as well as the shell dome planetarium in Halle an der Saale and the former provost church in Leipzig, which was saved in 1982 with donations from the West. All three buildings have since been demolished.

Existing examples are presented in the ostmodern.org network. For more than 30 years there has been a fight for the canteen of the largest GDR computer manufacturer Robotron in Dresden, housed in a low-rise building on the busy road to the Elbe bridge. The electrical engineering combine was approved for demolition in 1990.

The canteen is less a restaurant than a cultural venue, with its own “ensemble of dancers, musicians, acrobats, jugglers, magicians and puppeteers, cabaret theater,” argues ostmodern.org. It is “the origin of the famous Hercules club.”

It would be about identity, attitude to life and community. The culture war is still raging around the flagship canteen, built in 1968. A Kassel investment company wants to build a block with 3000 residential units on the site right next to the famous Hygiene Museum.

When it comes to East Modernism, the former Stalinallee in East Berlin is often cited. A mistake. The long street, which is now divided into Karl-Marx-Allee and Frankfurter Allee, was built in 1951 in the style of a boulevard based on the Soviet model. The facility was determined by ideology, and for that very reason does not belong to it.

The wide street that led straight to the east from the historic center of Berlin was heavily bombed during the war. As a result of a tightly organized rebuilding campaign that almost bordered on forced labor, pompous houses were built. They were claimed to be “workers’ palaces”, although most of the apartments went to officials.

As a WELT reader, take the opportunity to have your portfolio or your investment ideas checked by an independent asset expert without obligation.

Classicist facades with a special character

Even if they can be formally assigned to the socialist ideology, the classicist facades have a special character. Architects and visitors are still amazed at the bright and spacious apartments, parquet floors, heating and running hot water, house entrances with porters, porticos and tree-lined sidewalks.

The architect Michael Schultz, who moved to Berlin from Wiesbaden, lives in one of the “confectioner’s houses”. He raves about the great success of his famous predecessor Hermann Henselmann. “My 80 square meter apartment is of a high quality,” he says. “The rooms have clear floor plans and balconies. With the façades made from Meißner pale yellow ceramics, the house is a dream property for me. “

Many fans of the street, like Schultz, hardly know anything about the history. Name giver Josef Stalin stood at today’s Straußberger Platz as a 4.80 meter high bronze statue on a three meter high pedestal. In March 1953 the “Generalissimo” died, four days later tens of thousands had to pay homage to him on the funeral march down the avenue.

From 1956 Stalin cities, streets, squares and businesses were renamed. The crimes of the brutal dictator had been recognized, in 1961 soldiers knocked the Stalin memorial from its pedestal and drove it to pieces on a flatbed truck.

The construction of the “Stalinallee” was a commando operation. It was not the preservation of the city, quite different from, for example, in Sangerhausen in Saxony-Anhalt, where committed citizens saved individual monuments from destruction – the town hall square, lanes lined with half-timbered houses and other historical buildings. Today there is not a single prefabricated building in the center.

This article was first published in February 2020.

“Everything on stocks” is the daily stock market shot from the WELT business editorial team. Every morning from 7 a.m. with the financial journalists Moritz Seyffarth and Holger Zschäpitz. For stock market experts and beginners. Subscribe to the podcast at Spotify, Apple Podcast, Amazon Music and Deezer. Or directly via RSS-Feed.