Riding a motorcycle and being hit by a vehicle: An ultra-Orthodox young man in critical condition 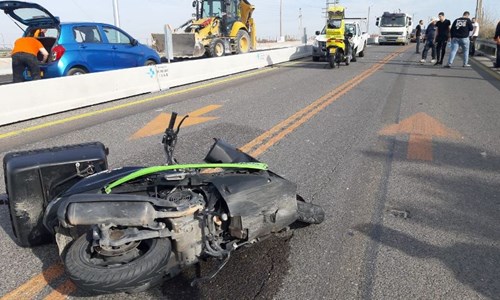 In the afternoon, a car accident occurred on Road 411, near Mazkeret Batya A 17-year-old ultra-Orthodox young man, a resident of Rehovot, was seriously injured in the accident Name for the prayer: Hezekiah son of Meital

A 17-year-old ultra-Orthodox man is hospitalized at Kaplan Hospital in Rehovot in critical condition, after being injured earlier today (Tuesday) in a car accident near Mazkeret Batya, while riding a motorcycle. Behadrei Haredim has learned that the young man studied until six months ago at a yeshiva in the south of the country.

The young man, a resident of Rehovot, was riding a motorcycle on Road 411 from Mazkeret Batya to Hulda, when he was suddenly hit by a passing vehicle. Rescuers provided him with medical treatment and evacuated him to the hospital. Name for the prayer: Hezekiah son of Meital

The accident occurred around 1:30 p.m. MDA reports that a report was received at the 101 hotline in the Ayalon area about a motorcyclist who was hit by a vehicle on Road 411 from Mazkeret Batya to Hulda. “A.

A paramedic riding an MDA motorcycle, Daniel Giat, said: “The motorcyclist was lying on the road with a vague consciousness and suffering severe injuries to his head and pelvis.”

“We immediately started medical treatment that included medication, fixations and stopping bleeding, put him in an intensive care unit and evacuated him for further treatment at the hospital when his condition was serious,” the medic added.

Medicine, the Da Vinci robot at the Galliera hospital in Genoa