Satire on the paradise of the rich And the luxury resort becomes hell- time.news 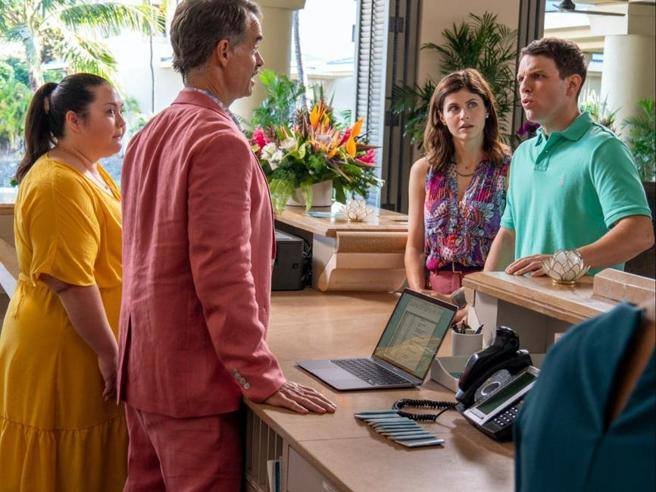 The TV series “The White Lotus” will start on August 30th on Sky and streaming on NOW. Among the palm trees of Hawaii, a portrait of today’s social injustices

Get to a heaven and make it hell. «The White Lotus», A television series by HBO – in Italy from 30 August on Sky and streaming on NOW – reveals the abyss that contemporary society has created between the famous rich 1% of the population and the rest of the world. Written by the author of «School of Rock», Mike White, the series is set in a luxury resort among the palm trees of Hawaii, where the atrocities of the privileged are not even perceived by those who perpetrate them, but invest the viewer, dazzle and annoy him. On the one hand there are the tourists, rich and white, on the other the world of those who, for only a decent salary, have to satisfy them in their extravagances.

The title, “The White Lotus»Is linked to the myth of the Lotophagi of the Odyssey, who eating the lotus fruit indulged in luxury and pleasure, losing memory and awareness. Ulysses shuns them, fears of being imprisoned in their own ignorance and is among the modern lotus eaters who move Armond, the hotel manager (Murray Barlett) and the rest of the staff: Belinda (Natasha Rothwell) the director of the Spa who dreams of opening her own beauty salon, Lani (Jolene Purdy) who hides her pregnancy so as not to lose her job, waiter Kay (Kekoa Kekumano), Hawaiian and son of the former owners of the lands on which the resort stands, expropriated without many compliments from other rich people.

«That of the bullying of a small slice of the population against the damage the rest of the world is an incredibly relevant topic today – says Murray Barrett -, our hotel is a concentrate of what is happening in the world, a microcosm where the rich manage to give their worst and treat others, the service staff, the local inhabitants, in a way that would scandalize them if only they realized it ». Armond engages in a relentless fight against spoiled boy Shane (Jack Lacy) and mammon on their honeymoon with Rachel (Alessandra D’Addario). Armond is the middle class, not the bottom rung of the social ladder, yet forced to be bullied by those at the top. We’ll even get a dead man in the end, but the ones on top always get away with it.

It also happens to Tanya, played by Jennifer Coolidge, who is insecure, alcoholic and mentally unstable but disproportionately rich. “Mike White didn’t compliment me when he told me he wrote the part with me in mind – jokes Coolidge, whom the audience loved in “American Pie” e “Legally Blonde“- yet, I hate to admit it, even I am surprised at not being aware of the world around me at times”. «Big Little Lies», «Billions», «Succession», «The Undoing“. There are many television series that tell the rich of today. Jennifer Collidge has an explanation: “People like to find themselves, at least for an hour, in an easier world, where problems can be solved by opening the wallet.”

Murray Barrett remembers feeling like a privileged white man. “It was during a trip to Egypt. It was 2011 and I ended up in the middle of the Arab Spring. I found myself in the square among the demonstrators. It was a moment of tension but also of hope and possibility. There was a joyful atmosphere despite everything ». Jack Lacy, on the other hand, tells of a vacation in Italy: «With the money from my first role I allowed myself a luxury hotel in Rome but I ran away, it didn’t make sense to be in a place where everyone speaks English and you can order hamburgers. Privileges don’t make sense. I went to a farmhouse in Tuscany to eat with my family and immerse myself in their culture ». The success of “The White Lotus” in the United States led HBO to announce the creation of a second season.

Optical Illusion test Can You Find the Second Man in 5 Seconds | Optical Illusion : Can you spot the man hidden in this picture in 5 seconds?
Posted onOctober 2, 2022
Menu