Shooting in Perm. What the survivors of a similar tragedy in Kazan say | Russia and Russians: A View from Europe | DW

On September 20, 2021, 18-year-old Timur Bekmansurov shot 6 people at Perm University. Three months earlier, 19-year-old Ilnaz Galyaviev opened fire in the Kazan gymnasium No. 175, killing 9 people. The authorities of Tatarstan expressed condolences to the families of those killed in Perm, and residents of Kazan are sharing their experiences on social networks.

“The news of the brutal attack on the Perm State National Research University with pain echoed in the hearts of the Tatarstan people. I express my sincere condolences to the families and friends of the victims. We grieve. I wish the victims a speedy recovery,” Tatarstan President Rustam Minnikhanov wrote on his Instagram page.

At the site of the tragedy in Kazan

Three months ago, Minnikhanov himself was at the scene of a similar tragedy. Then, on May 11, 19-year-old Ilnaz Galyaviev at about 10 am opened fire in the Kazan gymnasium No. 175. His victims were seven students and two teachers. Galyaviev is now in the Butyrka pre-trial detention center and has gained fame. They write fanfiction about him, they collect money for him for a lawyer.

Galyaviev himself said that he committed the massacre out of hatred. Timur Bekmansurov justified himself with the same feeling. He told about the planned attack on the Perm University on his page in “Vkontakte”. Like Galyaviev, the Perm shooter bought a weapon in advance, having passed all the checks, and practiced shooting.

“On behalf of all Kazan citizens and on my own behalf, I express my deepest condolences to the relatives of the victims and injured, as well as to all residents of Perm. I share with you grief and sorrow and sincerely understand all the storm of feelings. The events of the fateful May day of this year in Kazan, we will probably not forget We were shocked and confused, but felt tremendous support from all over our country and the world, “said Kazan Mayor Ilsur Metshin.

“Youth needs goals and perspectives for the future”

“Nothing has changed in kindergartens and schools since the last tragedy in Kazan, there is no security! Anyone can come in, it’s time to change the security system. Everything is carefully guarded at elections, resources are found. Why can’t we provide decent conditions for the daily protection of our children?” , – the user Diana Matveeva writes in the comments on the official page of Tatarstan on Instagram.

READ Also:  Spartak beat Napoli in the away match of the Europa League

Local artist Adelina Minnegalieva posted screenshots with media headlines about the tightening of arms trafficking following the shooting in Kerch and Kazan. “And what will we learn after all these assignments? What the hell, the year that the shooting took place in Kazan, it takes place in Perm. I have no words, only emotions. I sympathize with all the victims. Permians hold on, I you, oh, as I understand now “, – the artist wrote. 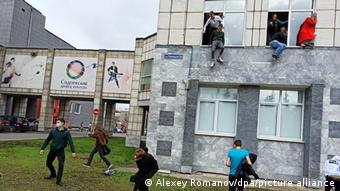 Students jump out of the windows of the Perm University, fleeing the shooting (September 20, 2021)

Tatarstan journalist Rasim Khaziev blamed society and the lack of systematic work with young people for the incident. “For young people to have healthy nerves, it is necessary to have a goal for the future and an awareness of the prospects in this very future …”, Rasim Khaziev wrote on his Instagram page.

The authors of the Tatarstan Telegram-channel “Failure” consider the proposed bans on arms trafficking to be populism. “The problem lies much deeper, and prohibitions cannot solve it. To stop the thugs, profound changes in society are needed: young people must have far-reaching goals, awareness of prospects and understanding of their future. nuts and stuffs people with artificial patriotism and traditional values ​​built on the events of almost a century ago, in which officials themselves have not believed for a long time. “

Kazan blogger Alber Bikbov saw the reasons for both the Kazan and Perm tragedies in the peculiarity of Russian capitalism. “The monstrous property stratification, the monstrous inequality in incomes, which is now observed in Russia, acts as a cancerous tumor not only on the collective consciousness of the entire society, but also on the most sensitive and receptive part of it – the young. They have no future because they see how poorly social and property elevators work, “Bikbov said.

Memorial in memory of the victims

After the tragedy in Perm, Kazan educational institutions again announced the strengthening of security measures. Security officials were pulled to the buildings of universities, schools and kindergartens. The administrations of educational institutions conducted additional instructions for the guards, tightened the access regime. At the same time, in the center of Kazan, the Ministry of Youth of Tatarstan organized a memorial in memory of those killed in Perm. Students and teachers of Tatarstan universities are carrying flowers and candles. According to media reports, about a hundred people have already gathered at the memorial.

READ Also:  Eyewitnesses about the shooting at the University of Perm: There has never been such a massacre | Russia and Russians: A View from Europe | DW

Apple iPhone 13 in the test: only one new product impresses | Life & Knowledge

Almudena Grandes, the Spanish writer died at the...

The need for a scapegoat is great

MK Moshe Arbel claims: This is the reason...

Column: The responsible portfolio | The duty