Tex Willer, origins of a myth. With «Corriere» (and «Gazzetta») the beginnings of cowboy- time.news 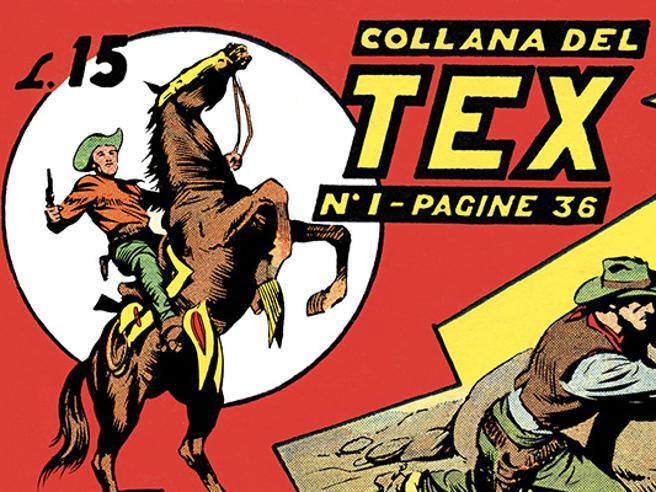 With the newspaper every week from 12 October and for the first time in anastatic edition, the beginnings of the ranger created by Gianluigi Bonelli and Aurelio Galleppini

The bigger magazines we are used to would come later. In their early days, Tex Willer’s stories were packaged in strips, in a format that was wider than high (16.5 cm at the base by 8 in height). And it is precisely the anastatic reprint of those first comic book adventures, begun in 1948, which is now back on newsstands with the “Corriere della Sera” and “La Gazzetta dello Sport”, accompanied for the first issues by six episodes of an unpublished strip .

On the other hand, it is not just a question of format. The content also presents some significant differences with respect to the encoded Tex afterwards. The protagonist is younger; she has not yet had the son Kit, born of the subsequent marriage to the Indian Lilyth; he wears a fringed shirt which he will then discard; he is a gentleman outlaw and not a Texas ranger; he has not yet become the great leader of the Navajo Indians with the name of Eagle of the Night, even if he already shows towards the natives an understanding that was very rare to find in western productions of that period.

His own name must have been different. The creator of the character, Gianluigi Bonelli, he would have liked to call him Tex Killer (name not usurped, given the strong ability to physically eliminate criminals), but then turned to a softer version, also to avoid incurring the arrows of censorship, which at the time was rather strict towards publications intended for children.

About censorship, readers will notice that the beautiful Indian Tesah, Tex’s companion in the first episode, is not only busty, but also quite undressed, with a dress whose hem stops long before the knees. Later the female characters (few actually in these comics) will wear much more chastened clothes, again for the usual reasons. Some of the dialogues, reproduced here in the original version, will also be amended because they are deemed too violent in subsequent reprints.

Nonetheless, Tex in its early days already presents the characteristics that will make it the most popular character in Italian comics. For example, he speaks with the colorful language made up of cursing as “by the horns of a thousand buffaloes”; it prepares for its antagonists what it euphemistically calls “a warm welcome”; he also pronounces epithets that to us today appear scandalous for their strong racist veins, as when he abruptly addresses an Indian on the other side as “dirty skin”. And at the end of each issue the story is left open to encourage the purchase of the next issue.

However, it must be emphasized again that this Tex is also a novice maintains a relationship of confidence and familiarity with Native Americans. He protects the young Tesah with all his strength, also because he was a “good friend” of his late father “Gray Bear, sakem of the Pawnee”. The adventurer created by Bonelli and designed by Aurelio Galleppini has a deep-rooted sense of justice (“I only kill those who deserve to be killed”) and judges people by how they behave, regardless of skin color. When white people like him commit abuses against Indians, he doesn’t hesitate to fight them. With US Army officers, especially high-ranking ones, he often has a conflicted relationship.

They are always big trouble, for those who find themselves crossing the path of the brave ranger, also because the bullets seem to refuse to hit him. Already in the first episode the evil Coffin (an ugly thug with a badly shaved beard, whose name in English not surprisingly means “coffin”) shoots him from close range and wounds him, giving him up for dead. The hero, on the other hand, has only been smuggled (it will happen several more times) and will soon be able to resume the fight.

In the first strips Tex has yet to meet Kit Carson, the pard who will accompany him in most of his subsequent adventures, but on the other hand he already owns the horse Dynamite, a fast and intelligent steed that will be his faithful companion in the initial phase of his career as a hero. From a certain point on, the ranger’s mounts will no longer be named. Carson will soon be joined by Tex’s son, also named Kit, and the Indian Tiger Jack.

In the unprecedented adventure that goes to newsstands with the «Corriere» and the «Gazzetta», scripted by Moreno Burattini and drawn by Rodolfo Torti, the protagonists are however only Tex and Kit Carson, on the hunt for criminals who prepare a bomb attack. Here the hero provides a sample of his hasty interrogations, conducted with the sound of fists. The unfortunate this time is an initially taciturn host, to whom the blows dissolve the speech. Tex, who risks his life every day, ignores where the guarantee is at home, he is not a guy who has much regard for the rights of the suspect or even of a simple witness. This is how things are in his West.

The first issue of the new series dedicated to Tex Willer is on newsstands from 12 October, Tex strips. With this series the “Corriere della Sera” and “La Gazzetta dello Sport” re-propose, for the first time in 70 years, the original strips created by Gianluigi Bonelli (1908-2001), thanks to a scrupulous recovery work carried out by Sergio Bonelli Publisher. The series includes the first four series of the comic, published between 1948 and 1952. Each issue collects three titles and is on sale weekly at e 4.99, in addition to the price of one of the two newspapers. The series consists of 66 issues (the first ten are shown in the graph on the right of this page), in anastatic reprint, of which six are unpublished. The first three titles to be released on October 12 are The mysterious totem, The talking rock e The mined bridge (the latter never published). The character of Tex appeared for the first time in 1948, precisely with the adventure The mysterious totem. The exhibition is also dedicated to Bonelli’s work Bonelli Story. 80 years in comics, curated by the editorial staff of Sergio Bonelli publisher with Gianni Bono and Comicon, open until next January 30 at the Fabbrica del Vapore in Milan. (ma. b.)

How to control radiation exposure in Germany
Posted onAugust 12, 2022
Menu