The artist Mordechai Shapira who performed at the mixed event: We will draw lessons from the show 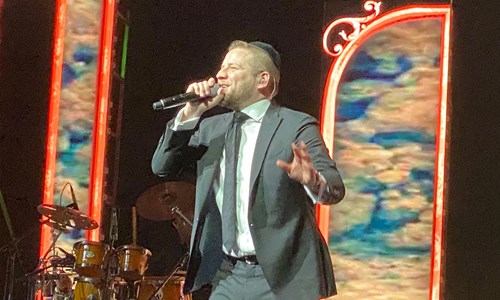 In an event that took place last night at the nation’s buildings, the artist Mordechai Shapira appeared before hundreds of yeshivot and seminary girls, who were present at the venue with a mixture and terrible break-ins | Many educators have expressed their protest at the scandalous conduct and the breach of the Holy Walls and now the artist is issuing a statement of clarification and apology

After last night, all the borders were crossed and all the most basic boundaries of sanctity were breached, on which the ultra-Orthodox and Torah public trust. During a performance by singer Mordechai Shapira with the participation of boys and girls from the ultra-Orthodox sector who sat together mixed in the nation’s buildings, when apart from the mixed sitting in the hall, the voice of women singing from the audience was well heard, artist Mordechai Shapira now issues a clarification.

A fence was broken: boys and girls danced and sang together in a performance at the nation’s buildings in Jerusalem

Shapira’s spokesman said: “Last night (Monday) I performed at the nation’s buildings in Jerusalem in front of an audience of thousands, to whom I came especially from the United States.”

“Unfortunately,” says Shapira, “for a short time dances began that I could not distinguish from the stage due to the large lighting and the fact that the hall is large and wide. As an ultra-Orthodox artist and as someone who grew up and was educated in ultra-Orthodox institutions,

“From the beginning, I only appear in performances that take place according to the halakhic boundaries. I asked the event managers and the production company that accompanies me to hold a meeting urgently to learn lessons and to prevent the recurrence of such cases in the future.”

Shapira concludes, “I will continue to make the yeshiva members happy out of a prayer that no trouble will come out of my hands.”

It should be noted that despite the clarification published by the artist and the taking of responsibility, in his personal account on the social network, Doug Shapira shared documentation in which the terrible break-ins that took place at the place can be seen.

As reported here in Behadrei Haredim, at an event held last night at the nation’s buildings in Jerusalem, artist Mordechai Shapira appeared before an audience of yeshiva students and seminary girls, an event that crossed all rules of modesty and holiness and caused a great stir when many rabbis and educators protested the scandalous conduct.

Just half a year after the previous round: $ 56 million for CyCode who wants to protect your code

Shabana: Am I going to get a divorce?...

“Be careful Sundar.C.” Look at how intimidating Khushbu...