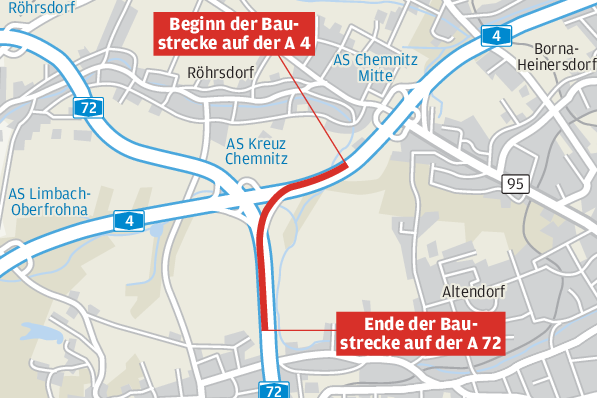 After the construction site at the Nossen motorway triangle, drivers at the Chemnitz junction are now threatened with the next traffic jam. At the Chemnitz motorway junction, the lane has to be renewed on the crossing from the A4 to the A72 in the direction of Hof. The reason for this is so-called concrete cancer damage, as Ralf Herrmann, division manager of the east branch of the Autobahn GmbH of the federal government, explained on Wednesday. It will be built over a length of 2.5 kilometers.

The preparatory work began on Monday. Appropriate security measures and traffic management will be implemented by the end of July. In two further phases, the concrete pavement is then removed on one side and asphalt is applied. Drivers must expect restrictions until October 25th. The traffic will be led past the construction sites in a single lane, it said. The experts speak of a “complex traffic management” in this area. On the A4 from Dresden there are still three lanes, but – as is often the case in construction site areas – they are narrowed down. Only one lane will be available at the crossing to the A72 in the direction of Hof. The crossings from the A72 to the A4 in the direction of Erfurt and the A72 to Leipzig would be combined with each other during the construction period and separated again at the end of the construction site, it said.

Because traffic jams are most often expected on the A4 from the direction of Dresden, mobile traffic jam warning systems with digital displays are to be set up there at intervals of two kilometers. As Herrmann explained, the traffic density is measured in this area. If the average speed falls below 35 km / h, the words “traffic jam” appear on the warning messages. At a speed of 35 and up to 70 km / h it becomes “risk of traffic jams”. In the construction site area itself, the speed should be limited to 60 km / h. At the federally owned Autobahn GmbH – it is responsible for planning, building and maintaining the motorway network – traffic jams up to a maximum of six kilometers are assumed, which is why the mobile warning devices are set up over this distance. The renewal of the motorway section is expected to cost around 4.4 million euros.

At the Nossen motorway triangle, where construction is being carried out over a length of four kilometers, the situation will relax again in mid-August, said Herrmann. Then the construction work should essentially be finished. There have been long traffic jams there for weeks.

Concrete cancer damage – the technical term is alkali-silica reaction – has been a problem on German motorways for a number of years. The damage manifests itself in the fact that the lanes burst open, especially in the area of ​​the joints. The cause is gravel, which contains too much soluble silica. If the gravel gets wet, a swellable alkali-silica gel forms, which soaks up more water. As a result, it puffs up – the topping bursts. The extent to which further damage can be expected on Saxony’s autobahns cannot be “seriously said,” said Herrmann. Measurements were taken regularly. One hundred percent certainty that no more concrete cancer will occur even with newly built concrete ceilings, it said.

In total, almost 50 million euros are to be invested in renovation measures on Saxony’s autobahns over the course of the year. Major construction work is currently underway on seven sections on motorways 4, 13 and 17.