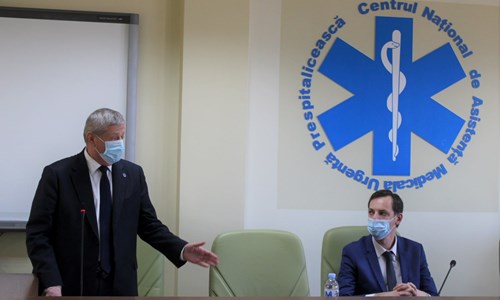 Weeks after being sent from New York, Moldova began distributing 4 tons of medical equipment recruited by the country’s Jewish community, the director general of the local health ministry said at a ceremony at the Moldavian Ministry of Health attended by community representatives: “You saved lives. This is an extraordinary tribute “

Light for the Gentiles: 250,000 K95 masks were sent by the Global Jewish Organization (GJARN) from New York in the USA to Moldova, and arrived this weekend in the republic, which is defined as “the poorest country in Europe” and are now distributed to the needy all over Moldova.

The assistance was made possible at the request of Rabbi Zosha Abelski, chairman of the Jewish community in Moldova, who turned to Rabbi Eliezer Avtsen of New York for urgent medical assistance. Demand disposable gloves after stocks run out.

In Moldova, which has a population of about 4 million, 10,444 people have died so far from the virus – including more than 100 Jews, including many Holocaust survivors. The situation of 131 residents is defined as critical.

The Chabad emissaries in the country, together with the Chief Rabbi of Moldova, Rabbi Yosef-Yitzhak Abelski, are collapsing under the burden. Assisting patients, engaged in the work of purifying the accumulated bodies and assisting families whose relatives have died from the corona.

As mentioned, in a collaboration between Rabbis Abelski and Avtzen, together with Health Minister Ella Nimrenko, Member of Parliament Adrian Billy and local Jewish activist Alex Halperin, medical equipment weighing about 4 tons and costing about half a million dollars was purchased in the United States.

Moldovan Health Ministry Director General Boris Golubin held a press conference at his office in Chisinau and praised the Jewish community: “By the end of the week all masks and gloves will be sent to medical centers across the republic and to areas with particularly high morbidity. We are grateful to you and thank Rabbi Abelski for identifying with the fate of the Republic in its fight against the Cubid-19 epidemic. This assistance is very important to us and the whole country thanks you for that. “

The president of the Jewish community, Simcha Bozor, said: “We have all lived side by side in Moldova for centuries. We are full partners in the fate of the country and I am excited to be able to help the republic. I hope we can soon announce another donation of medical equipment.”

Amazon folded? This is the extreme step she decided to take

season 2 returns with the same ingredients

Warning of strong winds in Qatar until the...

Vigilance in the West ahead of Putin’s parade;...

the editorial of “Novaya Gazeta Europe”