The growth of a girl named Amal is 3.5 meters: it is impossible not to notice | Culture and Lifestyle in Germany and Europe | DW

Little Amal is going on a long journey. Ahead – 8000 kilometers of track. Its route runs from Syria to the UK. The girl is looking for her mother, who left home in search of food and never returned.

Little Amal is a special girl. Amal is a huge doll and the main character of the theatrical project “The Walk”, which starts in Gaziantep in southern Turkey, near the border with Syria. Within two months this doll will “visit” eight European states. Germany is among them. This project is an attempt by the British theater group “Good Chance” to draw attention to the problems of refugees, which were forgotten during the coronavirus pandemic. As the artistic director of the theater Amir Nizar Zuabi emphasizes, right now, when the whole world is busy with solving other problems, it is so important to pay attention to the refugee crisis. And the main task of the theater is to tell not about difficult circumstances, but about the potential that people who have left their homes have.

This is a very important project for the theater. “One of the most innovative and unpredictable ever organized,” the organizers emphasize. Among the actors involved there are people who once traveled the path of refugees.

Eight countries are waiting for the girl Amal

Every place where Amal stops, local artists and cultural figures will join the action. A bright program awaits the audience. In Stuttgart, Amal will meet the Dundu Theater. The head of this German team, Fabian Seewald, in an interview with DW, emphasizes the uniqueness and boldness of the project. Deciding to implement it in eight countries during a pandemic is not an easy task at all.

The doll girl will come to Germany after visiting Izmir, Rome, Marseille, Geneva, Strasbourg. It will be in Stuttgart, Cologne and Recklinghausen, Germany, from October 1 to October 3, 2021. Then – Antwerp, Brussels, Paris and London.

In Stuttgart, Amal is waiting for puppet dolls similar to her, albeit even larger in size: up to five meters. In Cologne, the ArtAsyl association is preparing a meeting between Amal and the older generation who know firsthand about the war. Street processions are planned in other cities.

The doll must be operated by four people.

And during a pandemic, when many theaters are closed, such an action can help bring people together again. In order for Amal to move, the doll must be controlled by four people at the same time. Not without mechanics, of course.

The “Good Chance” theater group was established in the Calais refugee camp in 2015. His first production of The Jungle was a great success on stage in London. Art plays an important role in solving humanitarian crises, the actors and directors of “Good Chance” are sure. Fabian Seewald from Stuttgart agrees with this. 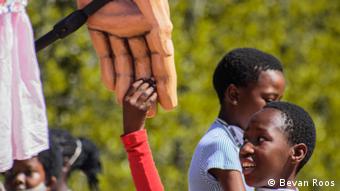 In an interview with DW, he recalled one action that his team held in 2013 in Cairo. Huge puppet kuli caused such delight among children that for a moment all differences and boundaries between people were erased. And the audience gets the most unexpected effect just when they are allowed to take part in the movement of the doll. This is all the magic of puppet theater: together to awaken to life.

Smart working, 6 out of 10 people work beyond the hours stipulated in the contract

“Scarface”. Powdered milk instead of cocaine and Michelle...

Tired and gray country: It seems that a...

‘Marakkar: Lion of the Arabian Sea’ on Oscar...

” This is the reason why Simbu was...

Hridayam Movie: ‘Reminiscent of old Mohanlal in some...

Bulichella, the story of Hideyuki: from Japan to...