The military coup in Sudan has been canceled: Prime Minister Hamduk has been reinstated 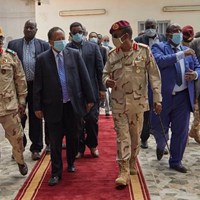 The ousted prime minister of Sudan, Abdullah Hamduk, was reinstated yesterday by the army commander, a few weeks after the latter ousted him in order to rule the country until the elections, which are expected in about two years.

The military coup carried out in Sudan by the commander of the Sudanese army, General Abdel Fattah al-Burhan, has been canceled. Burhan has so far headed the joint council of military and civilians, who together put together the replacement for the Sudanese government, which was ousted with the incarceration of former President Omar al-Bashir, after it ruled Sudan without straits for three decades.

A few weeks ago, General Abd al-Fatah al-Burhan ousted Prime Minister Abdullah Hamduk as well as most of the government ministers, claiming that they had promoted incitement against the military and against law enforcement agencies. However, al-Burhan has pledged that the process of transition to democratic governance will continue in full force, and that the first elections will be held on a long-set date, in about two years. The move taken yesterday comes after very heavy pressure from the international community, and threats of imposing severe sanctions on Sudan if it does not immediately return to being run under civilian rule.

A statement issued by the Sudanese army said Commander al-Burhan and Prime Minister Hamduk had agreed to return Hamduk to office. He will head a technocratic government agreed upon by both sides, and will work with Al Burhan to reach an equal valley with him on all disputed issues. Dozens of people have already been killed in demonstrations against the military coup, according to official reports, and their number may reach hundreds.

The fact that the army that has so far controlled the country has imposed very strong censorship on reports from the demonstration areas and across the country in general, has not made it possible to know the full numbers.

The volume of orders for Ilex Medical reaches NIS 250 million

Too much coffee breaks the heart; Care should...

Pfizer and Moderna, the news

WHO on Highly mutated new Covid variant: No...