The Prime Minister of Sri Lanka who was flexed by Chief Minister Stalin .. tweeted “Thank you Indian people for your love”! | Sri lanka PM Ranil Wickremesinghe thanks to TN CM Stalin

The Government of Tamil Nadu has sent relief items including essential items and medicines to help the people affected by the economic crisis in Sri Lanka. 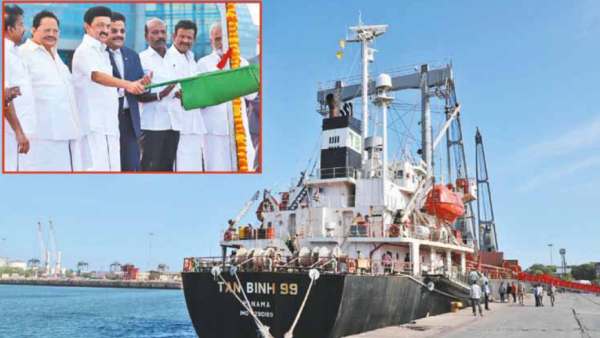 The people of Sri Lanka are suffering greatly from the severe economic crisis. Following this, Chief Minister MK Stalin announced in the Assembly that on behalf of the Government of Tamil Nadu, essential food items including rice and milk powder and medicines would be sent from Tamil Nadu to help the people of Sri Lanka. A unanimous resolution was passed in the Assembly to this effect. Preparation of rice, milk powder and pharmaceuticals for shipment to Sri Lanka was in full swing.

Relief items including rice and medicine on behalf of Tamil Nadu were packed in bundles printed with the words ‘With love from the people of Tamil Nadu’. All relief items were then shipped from the Chennai port to Sri Lanka on the 18th. Ships carrying relief supplies were flagged off by Chief Minister MK Stalin.

I also owe a heartfelt thank you to the Chief Minister of Tamil Nadu, MK Stalin, and to the people of India for their support. The Prime Minister of Sri Lanka Ranil Wimarasinghe said that he appreciated the assistance provided by the High Commission of India in Sri Lanka and the President of the Ceylon Workers Congress Senthil Thondaman.

RATP confirms major disruptions on Monday for buses and trams

“Riding a horse without a shirt”: G7 leaders...

hundreds of people involved, there are victims- time.news