The rediscovered music of Metastasio in Prato: the clandestine reels of the concerts by Ella Fitzgerald and Ray Charles 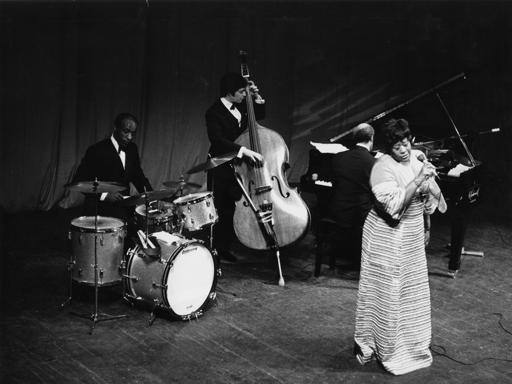 The tapes were in an old shelf. All the material found at the Metastasio in Prato is now scrupulously investigated and cataloged in the offices of the Magnolfi theater: a treasure that tells of the dynamism of the theater outside the constraints of this immobile time. The covertly recorded reels of the Prato performances by Duke Ellington, Ella Fitzgerald, Ray Charles and many other music monsters have been digitized and will soon be available to all together with the photos, contracts and posters of that incredible season that goes from 1964 to the mid-seventies.

There are many ways to tell the stories of the past. The most compelling, certainly the rarest, is to have a chance to relive. The research project of the mapping of cultural institutions promoted six years ago by the Tuscany Region has led to unexpected discoveries in the most famous cultural institution of the city. Which has invested its own resources to deepen and complete the work. A dusty cardboard box in the corner of a shelf held 130 spools. The names that appear written with the typewriter on the back of the boxes are accompanied by the dates and time of the concert. And they leave no room for doubt about the uniqueness of the treasure: May 16, 1970, 9.30 pm, Recital by Miriam Makeba; 17 September 1970, 9.30 pm, Mr. G. with Giorgio Gaber. These are the recordings probably made secretly by some technician at the time. In some cases – explains the president of the Metastasio Foundation Massimo Bressan – it is clear that there is no direction, one feels that the volume is adjusted by hand somewhere in the theater. Probably some friend of the author of this great theater season, the director Montalvo Casini. The latter, who died in 1994, was the genius loci of the theater in the late 1960s, when the building had just been restored. Other times, those in which a municipal employee like him – the theater at the time was municipal – could confront his own passion, jazz, calling the best world stars on the stage. It so happens that the current president is also a great connoisseur and scholar of that music: We will soon be uploading the digitized reels with various documents to the site, including the strange flying contracts signed with the stars on Paris hotel placemats and cartons, explains Bressan, who also plans to create a dedicated collection of concerts.

The work began with the mapping of the theaters, says the head of the communication and promotion unit of the Met, Francesco Marini. From the beginning he followed the discovery of all this unpublished material: We also managed to digitize hundreds of photos and 1,500 historical posters and posters: many – says Marini – we found them rolled up in an attic of the gallery.

Most of the reels have already been converted thanks to a laboratory of the Scuola Normale Superiore of Pisa. The quality was incredibly good and the same audio technician who took care of it – Gianfranco Scuotri – testified that no special interventions were needed to return to the original sound. Unfortunately for that laboratory it closed a couple of years ago and now the theater is looking for a new specialized studio – perhaps in Tuscany – to do the same operation with the rest of the recorded concert material.

Work on the material to be digitized goes on daily. Michela Petricone takes care of it personally. From her mask, the eyes of the jeweler and the satisfaction for this important operation emerge. an exciting and at the same time stimulating operation, I often find myself faced with unique rediscoverers, a real discovery every day, he says. His desk covered with research memorabilia: photos of the most important artists of the twentieth century, folders with posters and exchanges of letters to woo musicians, the contracts and a copy of the volume Storia del Teatro Metastasio, with whom to compare periodically to look for evidence to the finds.

The photos of the foyer of those years also show the faces and styles of the time, together with habits: a growing society with an audience of young people who understood what privilege it was facing.There are the images of 1967, when the season was baptized by Duke Ellington, or those taken two years later, when the boards of the same stage made Ella Fitzgerald’s performance vibrate. (the most participated in absolute). The same year – 1969 – Ray Charles started his plan by singing Hit the road Jack!, making the public go into ecstasy on notes that would make the history of world music and culture. Soon you will be able to listen to those sounds and see the images of that evening, along with all the others of the hidden treasure of the Met.