The storm campaign continues: Heidi Klum’s daughter is hot in a bra and thong Fashion Forward 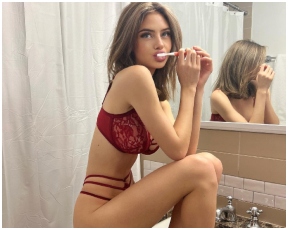 Just last month, even before the entire fashion world was upset by the Balenciaga torah scandal, the campaign photos of Leni Klum and her famous mother Heidi Klum for Intimissimi created a mini-storm. In the campaign, the mother and daughter, two generations of models, are photographed in lingerie hugging, laughing and enjoying life.

Commenters on social media called this campaign “disturbing” and said it looks like a male fantasy, but Leni Masada said she ignores the negative reviews, and now more campaign photos of the two are being published for the brand, this time in pajamas and all red underwear.

In one photo, Lenny and Heidi cuddle up in matching red satin pajamas, just in time for Christmas, and give each other a kiss in the air. In another picture they are leaning on each other with their eyes closed, with Heidi in a bra and panties set and Leni wearing a sweet pajama set of a tank top and shorts with touches of lace.

The cutest photo from this session is of Leni alone, wearing a lace bra and three-strap panties, brushing her teeth and sitting on a marble counter with her feet in the sink. Is this the most hygienic way to brush your teeth? Probably not, but when the result is so sweet, who cares?