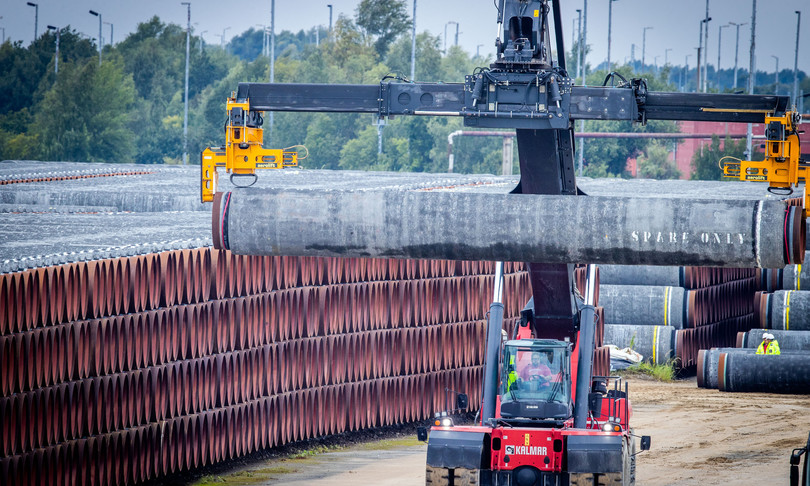 Time.news – It is still there, in the stretch of sea between Germany and Denmark, the ‘Fortuna’ ship already hit by American sanctions. In a few days another boat will arrive, the ‘Akademik Tscherski’ to help complete the works for the missing five percent of the pipeline. Apparently, no one in Moscow was too impressed by the sanctions and the new American high places against Nord Stream 2, the super-pipeline intended to drastically increase the natural gas to be transferred from Russia to Germany.

That Joe Biden’s United States has raised the tone on almost all the dossiers of the world’s geopolitical chessboard – from the frost in relations with Beijing to the brand new roughness towards Vladimir Putin – is no mystery, and it was evident that Nord Stream 2 would have been one of the first targets of the new US administration: so, yesterday the US secretary of state, Tony Blinken, blatantly went on the attack declaring that “every company involved in Nord Stream 2 risks American sanctions and is invited to stop the work immediately”. Nord Stream 2, the new head of US foreign policy continued, represents “a bad agreement, for Germany, for Ukraine and for all our partners in Central and Eastern Europe”. In other words: “This is a Russian geopolitical project, destined to split Europe and weaken energy security” of the Old Continent. The message is clear.

Nonetheless, the belief prevails in Berlin that Nord Stream 2 will not stop. “The US threats and sanctions have so far had only one result: that of damaging relations with Germany”, writes the authoritative economic daily Handelsblatt, for example. According to which “the question is not if the works on the pipeline will be completed, but when. According to experts, the most likely date falls in September”. That is: the punitive measures initiated by America represent “a notable escalation” of the tug-of-war around the fate of the pipeline, “but even in the evaluation of the Americans themselves they will have little effect”, explains the newspaper.

To begin with, i works on the pipeline are almost finished: there was a stop of almost a year, to resume the December sip. Little has changed from this point of view in the transition from Donald Trump to Joe Biden: the new head of the White House has criticized the project on various occasions, and the opposition of France is known, in this imitated by several other EU countries. The Americans repeat their position at every opportunity: the pipeline would determine an excessive dependence of Europe on Russian gas. And that is why they threaten further sanctions against those who participate in the laying of the pipes that will extend for about 1200 kilometers, in addition to those already issued against the ship ‘Fortuna’ and the owner who owns it, the Russian company Kvt- Rus, resulting in the withdrawal from the project of other companies, including the insurance giant Axa.

Also in January it was the French Secretary of State for European Affairs, Clement Beaune, who explicitly called into question the “abandonment” of Nord Stream 2 in the face of the heavy hand used by the Russian authorities against the supporters of Alexei Navalny, the main voice criticism of Putin. And yet any new sanctions against Moscow, Beaune assures, “are not enough”: a significant statement, considering that the French energy giant Engie is also among the financiers of the project.

Practically, Nord Stream is taken to the crossroads where different and conflicting geopolitical interests intertwine, with the couple Biden & Blinken committed to accelerating their foreign policy agenda more and more: from verbal attacks on Putin (“he is a killer”), which also represent a halt to any new Russian interference in US electoral campaigns, upon returning in the Paris climate agreements, passing through the reopening of the table on Iranian nuclear power and the redesign of the equilibrium in the Middle East, starting with Mohammed bin Salman’s Saudi Arabia, all dossiers on which Washington has raised its voice.

However, it is on Nord Stream that the difficulties of the contenders add up. If for the US there are “only bad options” on the table, given that presumably the project will not stop and sanctions risk turning out to be a blunt weapon, Germany is also in a hot spot: Chancellor Angela Merkel – who also proved very tough with the Kremlin in the Navalny affair and who has several open fronts with Moscow, from Russian hacker attacks against the Bundestag to the murder of a former Chechen rebel in Berlin which they come into Russian 007 hit – continues to hold firm on the need to conclude the pipeline, underlining the eminently “economic” nature of the project, but risks finding himself in conflict with the new tenant of the White House, whose arrival was hailed as the beginning of a kind of new era.

In addition, Merkel is forced to face the growing home front: critical voices about the project have also multiplied in Germany, especially after the arrests of hundreds of Navalny supporters in the four corners of the Russian federation. “This enterprise is wrong from start to finish”, Annalena Baerbock, the leader of the Greens, started the attack. “It is not a question of putting in place a moratorium, but of completely blocking the construction of Nord Stream 2”, the president of the environmentalist party urged, according to which the project “makes sanctions against Russia useless and contravenes the climate objectives of the Europe”. The liberals of the FPD and even several leading exponents of the same CDU of Frau Merkel are on similar positions.

For their part, the German media highlight above all the risk that the duel on Nord Stream represents for transatlantic relations: “When it comes to a bad agreement and the fact that Nord Stream 2 should not be completed – underlines the example the Sueddeutsche Zeitung – many Germans automatically think of Trump, who really did not care at all: he criticized the project only because he took every opportunity to attack Germany. In the case of his successor Joe Biden the opposite is true: he wants a good relationship with Germany, and nevertheless has the pipeline in its sights.

At the latest from Blinken’s rough statements, the federal government can no longer have any illusions: the pipeline jeopardizes the ‘new beginning’ with the US. “At this point, attention shifts all to the next summit of the foreign ministers of the Born, set for 23 and 24 March: on the occasion – so it is repeated in Berlin – the new head of US diplomacy will try to have a face-to-face conversation with the German Foreign Minister Heiko Maas, and it is assumed that one of the most difficult topics of the meeting will be Nord Stream 2.

In fact, that of the gas pipeline represents a difficult problem even for Washington: as Handelsblatt again suggests, the US government would be considering not only “sanctioning other Russian ships, but also the same company that manages the project “. That is Nord Stream 2 Ag, which belongs to the Russian state giant Gazprom and which is registered in Switzerland.” Although symbolic, the sanctions against Nord Stream 2 have considerable explosive potential ” , says the business newspaper, given that “its shareholders’ committee is headed by Gerhard Schroeder”.

American sanctions against a former German chancellor ?, asks the daily. “A travel ban or an asset freeze against a former SPD president? Something like this was unthinkable for a long time in the transatlantic partnership. That things have now changed shows how the controversy surrounding Nord Stream 2 has taken on a life of its own. “.