Those Neapolitans of 1943 kept on a leash and killed 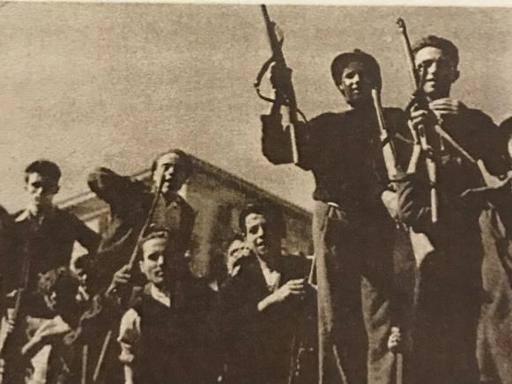 Gianni Donno reports the episode in his work in 11 volumes

Napoli, october 1943. Tied by the neck and killed in retaliation. The episode is not unpublished, but as if it were, because it ended up in a sort of black hole of collective memory. Until yesterday there was no trace of it in the history books and since then no one has talked about it.

Was it a hallucination? Was it an execution that had few witnesses and none survived the time? We will never know. We do know instead that the Neapolitans rose up on September 27 and, arms in hand, managed to drive out the Germans. And that on the first day of that rainy October, first the British troops and then the American ones under the command of General Clark, commander of the 5th Army, arrived at the gates of the city. Following were the correspondents of Life, the prestigious magazine that told the life of the world, including Robert Kapa, ​​perhaps the best-known photojournalist of all time. On October 18, therefore, Life comes out with this title: The allies conquer the ruins of Naples.

The article, now rescued by Gianni Donno, historian of the University of Salento, in the context of an impressive research on the Allied advance, describes a city without water, gas and electricity; wounded by devastating blows inflicted both from above and below, from aerial bombings and timed mines left triggered and buried by the fleeing Nazis as an extreme act of sadism against those who stayed or arrived. in this correspondence that for the first and only time is reported the news of the Neapolitans put on a leash and killed like dogs. The chronicler writes that to report it are the young Neapolitan guerrillas. He defines them just like that and still describes them with weapons in hand, while on board trucks stolen from the Nazis they patrol the streets of the city, skirting enormous heaps of rubble, in search of snipers. They are the same fighters who not only just liberated Naples, as Life documents and recognizes before many others, but who without knowing it also gave the Italian Resistance the go-ahead. The Germans had tied 125 civilians together by the neck in an open square in the Santa Lucia neighborhood, hitting a few every time a German was killed. A few lines, then we move on to something else. But they are enough to make even more dramatic and politically tangled the sense of those days, close to the armistice, between a falling fascist state and another liberal in formation. Precisely on those chaotic days of war and peace, of armed clashes and joyful tammurriate, Donno returns with The allied liberation of Italy, published by Pensa MultiMedia. His work, collected in a slipcase, is divided into eleven volumes enriched by an impeccable documentary and paratextual apparatus, including the maps and reports of operations of the American combat units of the Fifth Army, the reports of sixty Italian and foreign newspapers, and over a thousand photographs including those sculpted and unmistakable by Kapa.

The Four Days already mentioned by Life were for a long time ignored by the pro-Soviet left, which, although still declaring itself revolutionary, missed – and perhaps not fatally – the appointment with the Neapolitan insurrection. They were subsequently used by the same left, which in the meantime had become national, to legitimize itself on this front by maximizing the myth of popular resistance and to downsize the liberating role of the allied forces. Hence the anti-Americanism to which Donno repeatedly mentions, the same politically functional underlined by Piero Craveri in the preface (the introduction by Giampietro Berti), when he remembers Italy applauding the arrival of the allies, but also the one he was able to insinuate a non-existent American agreement with the mafia, after landing in Sicily, not to mention the responsibility for the bombing that the war inevitably brought with it. An anti-Americanism that does not escape Truman (Only De Gasperi’s transparent honesty prevented such stances from bearing a trace of blackmail); which informs the anti-capitalist culture for decades, and which even peeps into Naples millionaire by Eduardo and then becomes the oppressive context of the story told by Ermanno Rea in Neapolitan diary.

Today, however, even what remains of that left is wondering what will become of American Westernism; whether Biden’s US will continue to sound the retreat from Europe as in Trump’s time; or whether they will articulate the disengagement in a less traumatic way. The topic on the agenda. And while it is discussed in the webinars of the European Council under the heading global security, Donno’s work brings to mind the Italian epiphany of that presence with stars and stripes. The point that is most close to the author’s heart is immediately apparent. Did the Edwardian metaphor of the nuttata not finished with the war, but having just begun with the landing in Salerno and the Allied advance, make sense? Donno follows those troops until they enter Milan and the last armed clash after 25 April, that of San Pietro in Cerro, passing through the battles of Montecassino, the collapse of the Gothic Line and the liberation of Val di Sambro. And his answer no. That anti-Americanism made no sense. a no repeated at least ninety thousand times, because there are so many names on the tombstones, visible in the war cemeteries scattered between Syracuse and Udine, of Hawaiian (Nisei), Australian, New Zealand soldiers and officers, native Maori, Indians and Gurkhas (Nepalese), English, South Africans, French and Goumiers (Moroccans), Poles, Greeks, Italians of the Italian Liberation Corps, Brazilians, Belgians, of the Jewish Brigade, but mostly Americans, who fell on Italian soil to free us from Nazi-Fascism. Many were of Italian origin. They were called Lovascio Frank M., Barrolato John N., Gualtieri Emil, Censullo Nicholas J, Barone Anthony C., Valvo Pietro …