Tokyo Paralympics, Italian athletes competing and how to watch the competitions on TV – time.news 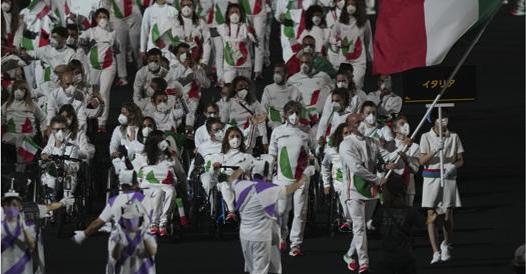 Bebe Vio and Federico Morlacchi led the blue delegation to the inauguration. From the night of 25 the first races

There was also the flag of Afghanistan at the opening of the Tokyo Paralympic Games. Sonly the banner, but not the athletes, blocked by the entry of the Taliban a Acceptance and the consequent closure of the country’s airports. The solemn ceremony was opened by Emperor Naruhito at the stadium Tokyo Olympic. An event seasoned with choreography, fireworks and the usual parade of delegations (captained by the blue team Bebe Vio and Federico Morlacchi).

Starting tomorrow 25th August, the races will be in full swing. The 16th edition of the Paralympics will go on until 5 September in the Japanese capital which hosted the Olympics a month ago. All races will be broadcast by Rai2, on air from 1.50 to 10.10 and Raisport + HD, from 10.10 until the end of the day in Tokyo, around 15.30. From 15.30 to 17.30, on the other hand, reruns and summaries of the races are scheduled.

Record female participation!#Tokyo2020 will set the record for the most female athletes ever at a #Paralympics.

They will take part in the event 4,400 athletes representing 160 countries. Italy is represented by the largest group ever: 115 athletes engaged in 15 disciplines, with a clear prevalence of women (63 athletes compared to 52 male colleagues) which represents an absolute novelty. High hopes are placed in swimming.

The long-awaited protagonist is the flag-bearer Federico Morlacchi, who will go down in the water among the first, at 2 on the 25th, in the second battery of the 400 freestyle, closely following the battery in which his teammate appears instead Simone Barlaam. And then there is great anticipation for the rehearsals of Stefano Raimondi, Antonio Fantin, Francesco Bocciardo, Efrem Morelli, Carlotta Gilli, Arianna Talamona and Arjola Trimi, just to mention the spearheads of an authentic battleship.

Cycling the other driving sport of our national team. In the course of the last World Championships, last June, thirteen first places have rained down, which have given us the triumph in the medal table. In this spotlight on Fabrizio Cornegliani, Luca Mazzone, Giorgio Farroni, Paolo Cecchetto and of course on Francesca Porcellato, in her eleventh Paralympics and her third sporting life after having won everything between athletics and Nordic skiing. In athletics the stars are Assunta Legnante, Martina Caironi, Monica Counterfeit, Ambra Sabatini and Oney Tapia. For each of them it is reasonable to expect a medal.

In fencing, there is not only the star Bebe Vio, in turn flag bearer. The saber will inaugurate, on the night between 24 and 25 August, a program in which many Italians can act as protagonists. On the platforms of Makuhari Messe Hall B the blue colors will be represented in the women’s competitions by Andreea Mogos and Loredana Trigilia in category A and from Rossana Pasquino in category B. The male saber category A will be the first to start, from 9 am in Japan (2 am on the Italian night): Edoardo Giordan he will find on his way in the group stage the Canadian Rousell, the Ukrainian Demchuk, the German Schmidt and the Chinese Li. Wednesday and Thursday it’s up to the sword, Friday and Saturday it’s up to foil.