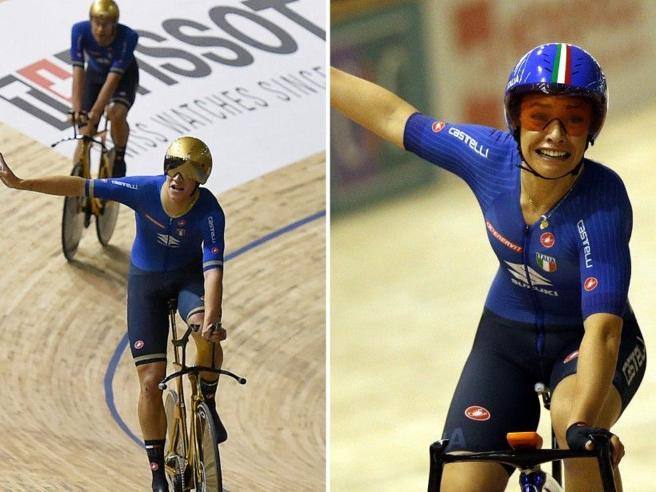 The triumph of the quartet led by Ganna in the pursuit and of Letizia Paternoster in the elimination competition. Silver of the blues in pursuit

lasted 3,625 meters the dream of the French to avenge a season of sporting defeats against us, which lasted half an hour for the Belgian girls to make up for the blue who, with Elisa Balsamo, three weeks ago had taken the rainbow jersey of road cycling at their home, in the Fiandre. After two days of competition, Italy is the absolute master of the World Championships on track in France: the gold at the opening of Martina Fidanza in scratch, yesterday was joined by those of the men’s pursuit quartet and, thanks to Letizia Paternoster, the title in the elimination lottery race. Let’s add the first silver in history in the pursuit women’s team and the full picture.

On the Siberian pine ring of the velodrome of Roubaix, the French men’s quartet fought shoulder to shoulder on the edge of cents with Italy’s Olympic gold medalist and world record holder. Our guys flew out of the starting block (thanks to the monstrous thrust of Jonathan Milan), the French cousins ​​did not give up, they overtook us and then bit the wheels dragged by the cheering of the home crowd. But when Ganna jumped in the lead to give the last pull, 375 meters from the finish, his shot blew up. the French quartet, which scattered on the track. After 24 years of fasting (but these were times of less qualified competition), Italy took the world title again. Together with Ganna there were the other three heroes of Tokyo (Consonni, Milan and Lamon) and Liam Bertazzo – reserve for the Games -, to whom Lamon gave way to the final. The time was a normal (for the Azzurri) 3’47 ”142 but on a slow and cold ring it was only about winning. It’s wonderful to have taken this shirt back after so many years – he explained Ganna, who on Friday with Milan will begin the race towards the fifth individual title – and after a hard-fought challenge. We felt that the cheering was all for the French, but we always thought we could do it. What begins this morning between Ganna and his Friulian heir could be a challenge that leads both to the final.

At the end of the day, here is the beast’s grit (words of the coach Salvoldi) of the thirty Letizia Paternoster who in a perfect race, slipping into the group like an eel, eliminated one after the other the opponents, liquidating the Belgian Kopecky in the final sprint. After three silvers and three bronzes, for the twenty-two-year-old from thirty the consecration of an enormous talent.
But not over: yesterday there was glory also for the girls of the quartet, where the new champion had also been co-opted Fidanza. Great Britain crumbled in the semifinals, Fidanza, Balsamo, Alzini and Consonni (Simone’s sister) decently yielded to the Olympic champions of the Germany in the final in the last four laps. Their silver medal is the first of the Italians in history in the most fascinating specialty of the track program, won by girls who alternate with ease and great results road, track and even a little cross. The coup of Fidanza among women failed to Elia Viviani: remained closed in the sprint of the scratch (won by the French Grondin), the Veronese had to settle for ninth place. For him, the world title remains a dream: he will try again in the elimination.