It all comes back. It is said. The Greek myth always returns irreparably, to frame the events of life. Forever and ever. With “Troya City, the truth in the case of Alexander“, staged at Litta Theater in Milan (MTM Theater) on May 13th and 14th, we return to the red velvet of the armchairs, with the feeling of someone who has lost patience and trembles to take back something that has always belonged to the human soul: theater. And we can go back to writing about it, talking about it. A spectator – or a journalist – can return to do so after the timid and brief period of shooting last summer, now perhaps sees a bit of light and restart. The pandemic is still here, with the masks, the spacing, the disinfectant gel at every little contact. But when the lights go out it’s a dip, the emotion of the unusual and the nerves of having waited so long also go away.

Is the show back? Perhaps it is really returning together with an ancestral mystery, the one that has always been besieged by a feeling of ardent disclosure in scholars such as the one represented by Antonio Piccolo on stage. And he, the protagonist of the representation with directed by Lino Musella, enriched in the sounds of Marco Vidino, hits and kidnaps. It broadcasts images as if it were a projector of memories, because the Greek myth is something we all already have inside. You see the characters he describes and plays, any set seems superfluous. But he, there at that blackboard that is physically present on the stage, questions you. Only in the mind, you answer, anticipate, exalted, what the chalk is about to imprint on black. Because the actor never says it during the performance, but you easily get familiar with his voice and all the while you feel like he’s ironically asking yourself: have you forgotten? There is no you can forget the names, the intrigues, the deeds. Paris and Alexander, Paris is Alexander. These are things you know, but surprisingly Piccolo, towards the conclusion, lets an unusual question germinate in the viewers: what’s the truth? In his metamorphosis, from the scholar to the heroes whom he himself, by undressing, personifies, shows you the facts (noteworthy is a moment in which the dark and the light draw the typical statue of an ancient fighter on his half-bust).

Who Really Destroyed Troya City? The answer that comes is tiring. Because it is as if, regardless of language, a personal name cannot be guilty. Can there be truth in a word, in a name that represents an essence? No. Yet the show tells a truth, you feel it in your gut because with that language that risks being so ineffective it tells you “it’s true”. To destroy. It is the right time (although perhaps any age is) to ask oneself if only one “name” can be the cause of destruction. We all know, almost innately, that this cannot be the case. The dust, the smoke and the dressing of the narrator put the point. “A man truly understands who he is when his destiny is fulfilled.”

You can never escape from the questions about the truth, because the answers, even if they have not yet manifested themselves, are already there right inside asking those questions. Never getting tired of questioning means “staying”. Unique, cursed, possibility of being able to rise again if anything. Here we are, a loud applause closes the moment. “Is good!” the audience whispers as they leave the room, an orderly queue for two of people who, like in a puzzle, are trying in this period to recompose and exploit old subscriptions to which the Coronavirus has taken away meaning. But there is an air of satisfaction. Just like in the eternal stories told by Piccolo on this occasion, returning to the theater was paradoxically similar to realizing, as happens when faced with some questions, that he never left. 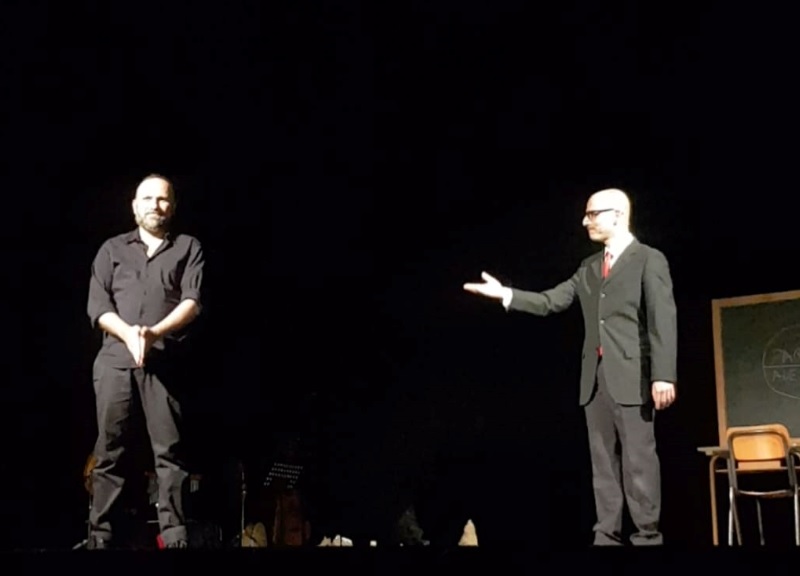