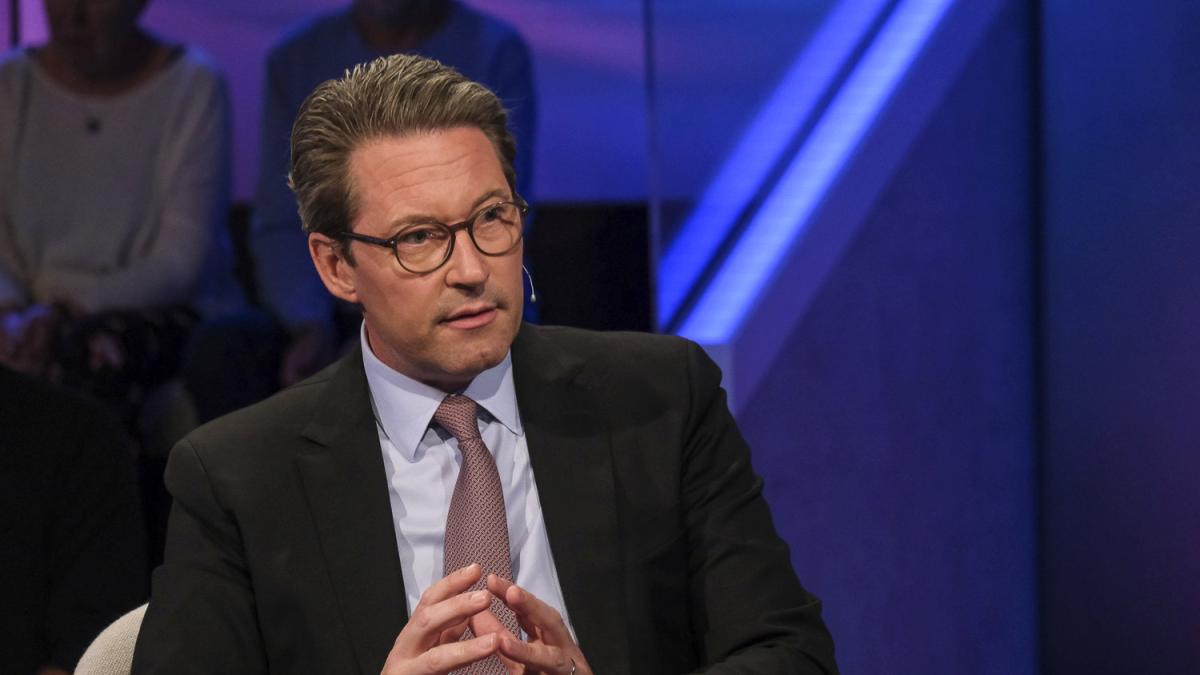 “The Rezo doesn’t know me. I don’t take it seriously anymore “

At Sandra Maischberger, Transport Minister Andreas Scheuer stumbled when he talked about the toll debacle and the weakness of the Union. Two journalists in the group found strong words for Merkel’s Afghanistan policy and saw a clear reason for Olaf Scholz’s soaring.

Tot-said live longer. Now that the SPD candidate for Chancellor Olaf Scholz, who has long been written off, has moved to the top in polls for the federal election, the focus is all the more on the Union’s weaknesses. In her talk on the topics of the week, Sandra Maischberger devoted herself primarily to the federal election campaign on Wednesday evening.

In addition to the question of the candidates’ performance, the current dominant debates about climate protection and the Afghanistan crisis were also discussed. Transport Minister Andreas Scheuer (CSU) was given the thankless task of somehow selling the Union’s other construction sites as future-oriented in addition to the debacle for which he was responsible for the car toll.

In addition to Scheuer, Middle East expert Antonia Rados and journalists Gabor Steingart and Hans-Ulrich Jörges discussed in the studio.

At first, Rados painted a bleak picture of the future of Afghanistan after the Taliban came to power. “Things will change dramatically,” said Rados, who then found clear words. “This is not a change of government. The Taliban have defeated the greatest military power in the world – NATO. ”Therefore, they are currently extremely self-assured and would now dictate their terms to the West.

Steingart contradicted this steep thesis of the lost war: “NATO did not fight. I haven’t seen any fighting. ”Rather, the Taliban had negotiated this“ peaceful transfer of power ”with the then incumbent US President Donald Trump at the beginning of last year. Nothing came as a surprise that made Angela Merkel’s government statement so incredible. “That was political carnival. She has slipped into the role of a victim, but she is an accomplice in this retreat. “

“The Merkel empire collapsed in this crisis”

In terms of drastic formulations, Hans-Ulrich Jörges apparently did not want to stand back from the previous speakers in any way and added one more to it. In Merkel’s failure to withdraw from Afghanistan, Jörges saw a deep symbolism and parallelism to other crises in the recent past. “In 2015, Angela Merkel announced at a press conference in the midst of the refugee crisis ‘we can do it’. Today, when it comes to a much smaller problem, it says ‘we can’t do it’. “

One can see, Jörges continues, how German politics has disintegrated in the meantime. “We can observe enormous state failures, one after the other,” he said and, in addition to Afghanistan, addressed the corona management, the inadequate civil protection during the flood disaster and the cum-ex scandal. “At the end of the Merkel era, the Germany model no longer exists. Nothing works here anymore. The Merkel empire collapsed in this crisis. “

“The Rezo doesn’t know me, I don’t take him seriously anymore”

Andreas Scheuer was then introduced by Maischberger as a member with the most calls for resignation in the Merkel cabinet – flanked by malicious clips from various cabaret artists and Youtuber Rezo. The hostess wanted to know how he was doing. “That hurts, but it’s not a category. You have to endure that. The Rezo doesn’t know me, I don’t take him seriously anymore. “

On the other hand, he saw border crossings in Steingart and Jörges. “I appreciate both of them, but when they talk about state failure and perpetrators, you have to appeal to think about words.” He knows a parliamentary group in the Bundestag that uses a similar choice of words in every speech, he said with regard to the AfD.

“If you fail with a project, it hurts brutally”

Then it got uncomfortable for Scheuer, who had tried with birthday congratulations for Maischberger to start with a relaxed and conciliatory conversation atmosphere. The jubilee did not allow herself to be ensnared and confronted Scheuer unimpressed with the major construction sites in transport policy, the holey digital infrastructure in Germany and the looming debacle of millions with the car toll.

Scheuer was clearly trying to put things in a positive light and to emphasize successes. However, he could hardly get out of the defensive. “I’m a guy who is in love with success. If you fail with a project like this, it hurts brutally, ”he admitted at the toll. However, he finally referred to the results of the committee of inquiry. His decisions were “legally justifiable”. When investing in the rail system and digitization, he mostly referred to successes that would only materialize in the near future.

Steingart was then unconvinced and commented Scheuer’s performance succinctly as a “unique egg dance”. In any case, the CSU troops in the cabinet would not consist of any glamorous heroes, which is why he doubts that Söder would have been the better candidate for Chancellor: “At least Laschet does not make any nonsense.”

Too little for Jörges. “Laschet cannot mobilize and inspire people, he thought. The sudden success of Olaf Scholz is due to the weakness of Laschet and Baerbock. And the fact that the rest of the SPD remains in the background: “Two parties have nominated the wrong candidates and Scholz is fortunately all alone, otherwise the whole misery of the SPD would be immediately visible.”