University, the day of the test for the health professions: 73 thousand try to enter, but there is room for only a third of candidates

I’m almost 73mil the aspirants nurses, physiotherapists and technicians who have taken the entrance test for degree courses in health care professions, the last of the medical-health academic area, which follows the controversial test of Medicine and Surgery. Questions and modalities are similar – 100 minutes to answer 60 questions – but the places available are clearly less: in all about 29mil. To analyze the numbers of this new edition – then reported on the portal Skuola.net – and the Permanent conference of graduation classes of health professions. Requests for the 2021 test have increased by 0,3% compared to last year for all professions, well of the 12,4% per Nursing. In the latter course, however, despite the increase in 13,6% of the capacity of the offices, will be able to access only a little more than 17mil freshmen compared to almost 28mila candidacy. This means that – when it gets better – there is one place for every two and a half candidates. And compared to other courses they are not even few: not all university students are in fact so lucky.

Green pass at the university, Mass: “Sample check, a professor can do it for the exams. In-person teaching at 75% “

The impossible undertaking, for some time now, remains the entrance to Physiotherapy. Even if the subscribers to the trest have dropped by 6,27% – from 23 thousand last year to 22 thousand of this – well seven out of eight between them will remain out: the seats are in fact alone 2.597. The race to access is also difficult Obstetrics: just over a thousand seats compared to about 6mila candidates. The prospect for aspirants is decidedly more rosy radiology technicians: the test recorded an increase in candidates of 14,8% – less than 3mil enrolled in more than 4 thousand – but there are still chances of success for one in three. For access to the course that leads to becoming laboratory technicians, on the other hand, the chances of making it are even one in two. 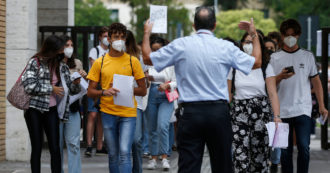 Medicine test 2021, the Miur cancels one of the questions: all participants will have 1.50 points regardless of the answer

To influence or not chance of success it is also the choice of the university, according to the regional analysis of Angelantonio Mastrillo, assistant secretary of the Standing Conference. The university of Lazio in fact they registered a +6,7% of requests, with almost 10mila candidates, which obviously made the available places more contested. Puglia also seems to be experiencing a renewed appeal: many students, in fact, are now trying to do not move from the territory of origin and the Region records an increase in 7,5% of test enrollments that almost touch quota 6mila. The aspiring freshmen from Campania – up by 5.5% – come instead to 6.500. The opposite trend for universities in Piedmont (which have 11.4% fewer candidates than last year) and in Lombardy (-2.8%).

The trainer in the flea circus leaves

Nikitin hastened the heads of municipalities to connect...

Seven victims of the shooting in the Perm...

More than a quarter of the monthly rainfall...

More than a third of the monthly rainfall...

Frosinone, a drone carried the gun to the...

Two losses for the price of one

Video: Kickl sues Rosam for being subject to...