Chennai: The Hindu Preachers’ Conference, which has caused great tension in North India, is to be held in Madurai, Tamil Nadu. The remarks made at the Hindu Samiyars Conference in North India shocked the entire country.

The Dharma Sansad Conference of Hindu Priests was held in Haridwar, Uttarakhand from December 17 to December 19 last year. Preachers from many parts of the country participated, including the leaders of the Agatas who emphasized the radical Hindutva policy. 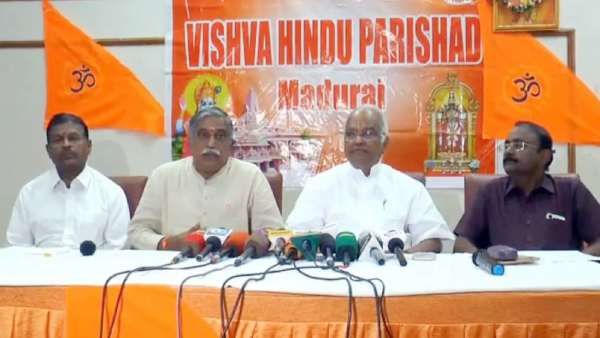 Speaking to the crowd, Sagar Sindhuraj Maharaj of Roorkee said, “When you leave the house, go with weapons. Always walk with weapons. If anyone comes to attack you, do not let them go alive.” Anand Swaroop Maharaj said that Christmas and Eid should not be allowed in Haridwar hotels. The windows and property of the hotels that allow these festivals to be celebrated must be protected by their owners. If they do not accept our demands a war like the 1857 Soldier’s Revolution must be waged.

As Swami Prabodh Anand Giri, the Mahamandaleswar Swami of Juna Agatha, speaks, we have no choice. Ethnic cleansing should be done like in Myanmar. He said every Hindu should be armed. Niranjani Agatha Mahamandaleswar Annapurna Ma said that a Muslim should not be the Prime Minister of this country in 2029. We must destroy their population. We must be prepared to kill and go to jail. If we have 100 players we can defeat 20 lakh people. It is this feeling that will protect the sanatana dharma, he said.

Speaking on the occasion, Dharmadas Maharaj of Bihar said that India and Pakistan, Bangladesh and Afghanistan are becoming Muslim countries. Former Prime Minister Manmohan Singh has spoken out against minorities in parliament. Nathuram Kotse said if I was the only MP all the 6 bullets in my gun would have flown over Manmohan Singh. Cases have flown in for such talks. It is noteworthy that this conference of Hindu preachers is to be held in Tamil Nadu as well.

Here is a Controversy Flash back story on Hindu Saints Conference in North India.