As expected, the Bank of Israel left the interest rate unchanged at 0.1 percent, signaling that it does not intend to change it any time soon.

Inflation expectations in Israel have fallen in recent weeks, but we still forecast lower inflation for the coming years than the bond market expects.

Growth in Israel in the third quarter was only 2.4 percent, mainly due to a decrease in public consumption and a decrease in the purchase of vehicles that were affected by disruptions in global supply and delivery. In our estimation, this decline in vehicle consumption is expected to moderate and reverse in the coming quarters and contribute positively to growth, so that the annual forecast for 2021 remains close to 7 percent.

The rise in morbidity in Europe has accelerated in the last two weeks and this has led to the re-application of restrictions especially on gatherings, in Austria they have worsened with closure and in Germany no similar action is ruled out. This will exacerbate the slowdown in the current quarter and support a wider policy of the central bank in the eurozone and the weakness of the euro in the next two months.

In the UK, inflation continued to rise, where the chances of raising interest rates in December are increasing. The employment data for October also support this. But fears of morbidity will not allow the central bank to raise interest rates quickly.

In the US, economic activity accelerated in October in light of declining morbidity, as did retail sales and industrial production.

We do not believe that the US Federal Reserve will advance interest rates in the market, and the appointment of Lyle Brainard as Vice President supports that. Brainard is one of the voices in favor of an expansionary monetary policy at the bank, but also of tightening regulation on banks.

Unlike most of the world, Japan does not have inflation, and it seems that it will not soon either.

Remain in the waiting position

As expected, the Bank of Israel left the interest rate unchanged at 0.1 percent and will end its intervention programs in the bond market in December. In Israel, inflation is within the target and the forecasts for the future are to moderate the rate of price increase.

The appreciation of the shekel and the low price index in October were reflected in a sharp decline in inflation expectations in Israel. Despite the decline we still forecast lower inflation for the coming years than is derived from the bond market. 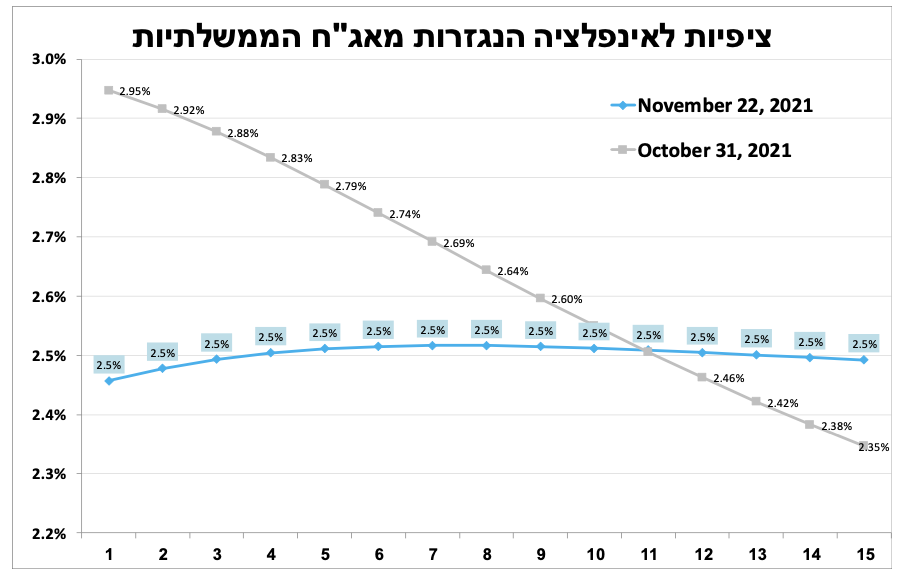 According to the initial estimate, growth in Israel in the third quarter was only 2.4 percent at an annual rate, lower than earlier estimates, mainly due to a decline in public consumption and a sharp decline in the consumption of vehicles affected by supply disruptions. In our estimation, this decline in vehicle consumption is expected to moderate and reverse in the coming quarters and contribute positively to growth, so that our annual forecast for 2021 remains close to 7 percent. The composition of growth was mostly positive when there was a sharp increase of 15 percent in investments (not just investments in residential construction) which supports future growth. Despite the strengthening of the shekel, exports grew by 7.5 percent.

Rising morbidity in the eurozone will curb demand and inflation

The rise in morbidity in Europe has accelerated to new highs in the last two weeks, and this has led to the re-application of restrictions especially on gatherings. In Austria it got worse with closure and in Germany no similar action is ruled out. This will exacerbate the slowdown in the current quarter especially ahead of the ‘holiday season’ in Europe. 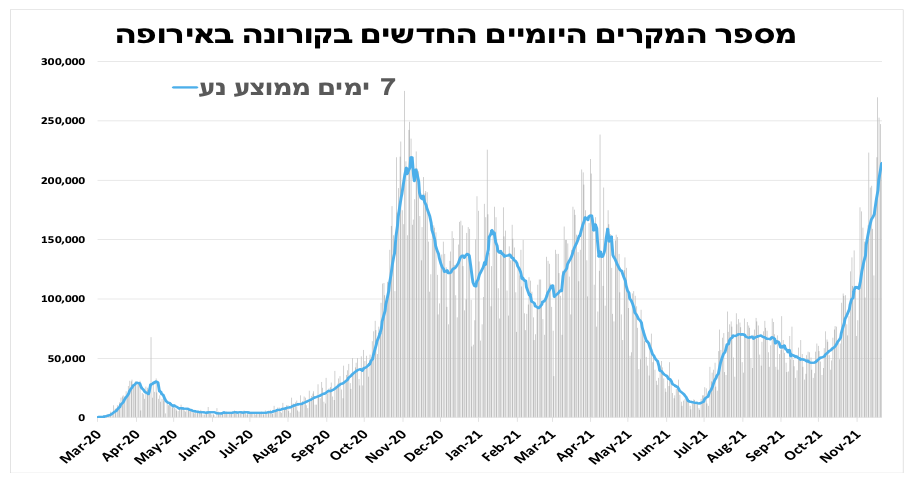 In our estimation, the morbidity will also moderate the high inflation in the euro area from January (inflation will continue to rise until the end of the year due to energy), which supports the continuation of the very broad policy of the central bank in the euro area. This was also emphasized by the Governor of the Central Bank, despite calls for a faster reduction of the expansionary policy by the Central Bank of Germany. This supports the weakness of the euro in the next two months (most “waves” moderated after two months). 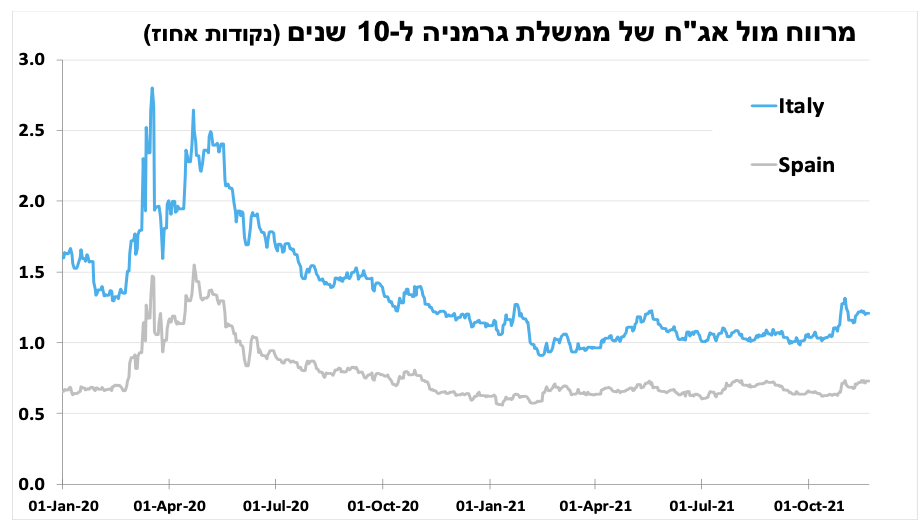 In contrast to Europe, in the UK inflation continued to rise beyond expectations to 4.2 per cent in October, where the chances of raising interest rates in the forthcoming decision in December are increasing. The initial employment report for October also supports this after showing a better-than-expected increase in the number of employed persons, after the completion of the HALA program in September. 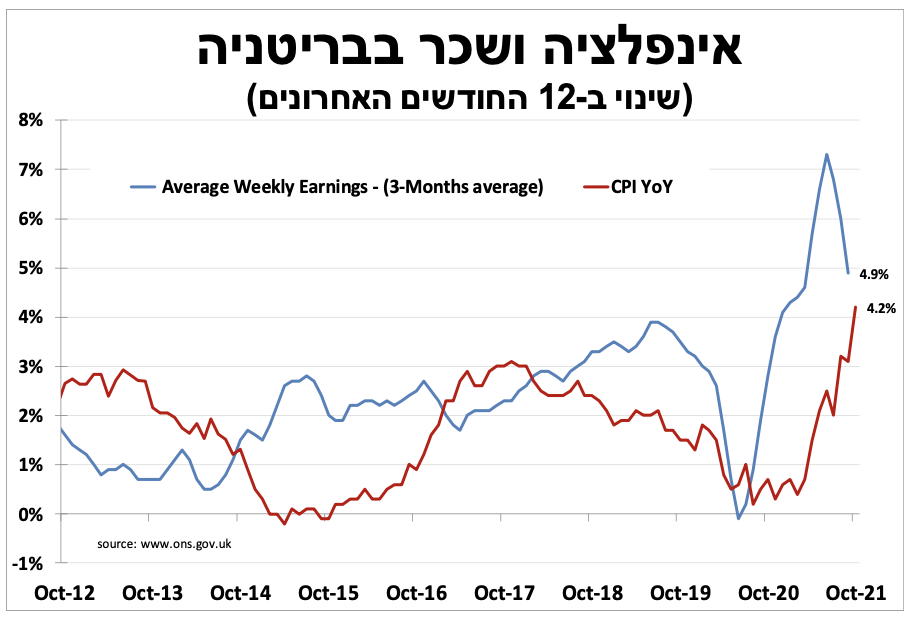 In the US, the corona wave is declining and activity is rising – we believe the Fed will join the market.
READ Also:  The high price of natural gas is expected to further divert demand for oil in the near term

In contrast to Europe, in the United States economic activity accelerated at the beginning of the current quarter in light of the decline in morbidity. This is reflected in the strong employment and inflation data. Retail sales (excluding fuel sales) and industrial production in October also reflect improvement with an increase of 1.5 and 1.6 percent, respectively. In our estimation, the data will lead the central bank to update upwards its forecasts (on December 15) regarding the short-term interest rate to 2 interest rate hikes next year. A scenario that is already largely priced in the financial markets.

Appointment of Lyle Brainard The Deputy Chairman of the US Federal Reserve (subject to Senate approval) further strengthens the Bank’s “June” line, which calls for a slow and careful reduction of policy and strengthens our assessment that the Bank will not exceed market expectations of rising interest rates. However, it is important to note that during her tenure (since 2014) as a member of the Monetary Council, Braindard was the lone voice who repeatedly opposed regulatory easing the bank applied to the financial system, especially easing capital requirements and liquidity of large banks and appointing the president. .

There is no inflation here

Inflation is one of the most popular topics on the net in the last two months, however, in Japan the lowest inflation among the OECD countries (and probably the lowest in the world) has stood at. October only. Although aggressive competition in the field of cellular communications has dropped almost 0.5 percentage point of inflation, prices in Japan are still not moving. Companies are not indifferent to global inflation, with the producer price index rising by 8 percent in the 12 months to October, eroding the profits of some companies. In our view, without significant fiscal expansion, inflation in Japan will not rise. The new prime minister plans a significant increase in spending in the next budget, but from past experience this does not mean that households will increase spending in parallel. 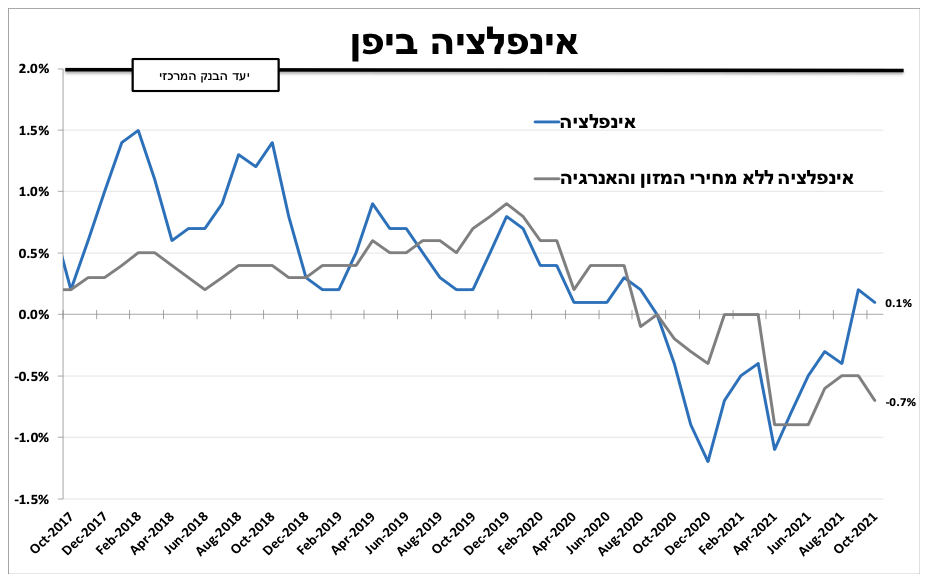 The head of Sakhalin spoke about Denmark’s plans...