Oranienburger Strasse, 285. This address in the Reinickendorf district in northern Berlin is regularly hammered into navigators of buses with Moldovan numbers. Here is the center for the initial reception and registration of applicants for refugee status. Here, after two days on the road, they bring dozens of citizens of the Republic of Moldova who want to seek asylum in Germany. In the month of July alone, about 900 such applications were submitted by Moldovans in Berlin.

Buses from Moldova usually arrive at night. It got to the point that this summer city reception services for asylum seekers ceased to cope with the influx of migrants, and Berlin newspapers came out with headlines like: “Call for money – more and more Moldovans are seeking asylum in Germany.”

The registration center itself and the hostel for newcomers are located in the depths of the park. On the alley leading from the park to the metro, every second family speaks Moldovan – and almost all of them refuse to be interviewed. In total, at the beginning of September, there were about 18 thousand people in Berlin, awaiting consideration by the authorities of applications for refugee status.

Sascha Langenbach, spokesman for the city’s refugee agency, calls the need for Russian translators “colossal”. “At least in order to explain to our applicants what awaits them in the coming days – how the registration process goes, what requirements are presented during the medical examination.”

At the end of August, the department recruited 20 Russian-speaking students. According to Langenbach, they were searched for all over the city – both at the local Slavic institute and in the Jewish community.

At the entrance to the protected area, where hostels for newcomers are located, three dozen Moldovans with suitcases are waiting. They flatly refuse to be photographed and give their names. But they speak openly about the reasons for their arrival in Germany: they do not have enough money.

“We came so as not to spend the winter at home,” says the young woman. “Because we cannot afford to buy gas at eight lei per cubic meter (0.39 euros – Ed.). We have nothing to live on. If I had something to live on, I would not ride with my children to Germany. “

Jump in the number of “refugees” from Moldova

According to Sasha Langenbach, press secretary of the refugee department, for several months now Moldovans have been firmly holding the lead in Berlin in terms of the number of applications for asylum to Germany. According to him, they account for 50-60 percent of the total number of applicants. Why did the Moldovans suddenly rush to Germany for refugee status? Sasha Langenbach hesitates with an answer and chooses his words carefully. “We have no explanation for this,” he says. “But we know that Moldova is the poorest country in Europe, and that the average per capita income there is so low that this could be the reason that people want to live in Germany in better conditions. “

This is also said by those Moldovans who agreed to talk to a DW correspondent on condition of anonymity – there was no talk of any political persecution; but everyone was delighted with the (more than modest by German standards) cash benefits and free medical care.

Bundestag member: we need to close this loophole

Fritz Felgentreu, a Bundestag member from the Social Democratic Party of Germany and chairman of the German-Moldovan Forum, says the influx of Moldovan “refugees” is the result of the actions of a small but very entrepreneurial segment of the Moldovan population. 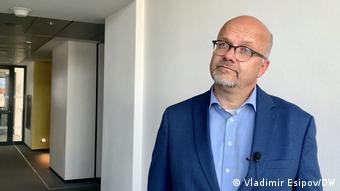 Member of the Bundestag Fritz Felgentreu

“None of them will receive any asylum, it is absolutely clear! Because there is no political repression in Moldova,” the politician says. this is only a tiny fraction of the population of this beautiful country and I think it is our responsibility to see to it that it stops. “

But the law is the law: any foreigner has the right to ask the German authorities for asylum. And at the time of consideration of the application, he can be in the country, receiving assistance from the state. The Berlin State Office for Refugees says that a few hundred euros may indeed be the main motive for migration.

The press secretary Sasha Langenbach explains: within the framework of the procedures for the registration of arrivals, assistance is provided – material and financial, including three meals a day. According to him, if people are accommodated in an accommodation center, they are paid small pocket money – about 130 euros per adult. If the accommodation is organized in a hostel where there is no food and you have to cook yourself, then this amount increases significantly – people receive 350 euros per month per person.

“It seems that for some people this is really a reason to try their luck in Germany,” says Langenbach. 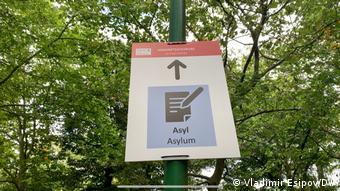 Sign “Shelter” on the territory of the initial reception center

Interviewed Moldovans confirm these assumptions. Some of them, not understanding a word of German, for some reason are sure that in the first days in Germany they will be given almost “checks for 50 thousand euros” to pay for medical services. “We don’t pay for the communal flat, they give us housing, what else do we need? Warmth, good food and free food,” one of the Moldovans in the refugee reception center admires.

The city, meanwhile, announced that from September 2021, cash payments to refugee claimants will be made once a month – as was the case before the pandemic – and not three months in advance. (The frequency of payments has been changed in order to reduce the number of visitors to the refugee reception centers).

As a result, already now the applicants will receive 146 euros in their hands per month, and not 438 euros at once for three months in advance, as it was before.

But will this number of “refugees” from a poor but completely democratic country reduce?

Camping.info: This app helps you find a campsite

Four people died in a plane crash in the Irkutsk region

Broadcast from the cockpit for the first time...

What is behind the sudden closure of the...