Women’s Awards in Germany: for Achieving Gender Equality | Culture and Lifestyle in Germany and Europe | DW

There are over fifty awards for women in Germany, ranging from scientific, entrepreneurial and social to cultural, musical and literary. Some are awarded annually, others at intervals of two, three or four years. Most of these awards are usually submitted before the end of October of the current year, so that the jury has time to select the winner and announce the name of the winner early next year. Almost every major city in Germany also has its own women’s award – they are awarded to women who have achieved success in various spheres of life. But there are only a few women’s awards for achievements in the field of gender equality in Germany, and all of them were instituted relatively recently.

The Marie Juchacz-Preis, named after the German social reformer and women’s rights politician, was established in Rhineland-Palatinate in 2019 by the Prime Minister of the federal state, Malu Dreyer. The occasion was the centenary of women’s suffrage in Germany.

Prize winners are selected by a competent jury consisting of experts in the field of science, media, art and culture, as well as representatives of public associations and groups interested in achieving equality between women and men. The prize is not provided with a cash prize – the laureates are awarded a bronze statuette depicting a female figure, created by the famous artist Jutta Lutz.

The prize was first presented on 7 February 2019 during a ceremony “100 years of women’s suffrage“… Lore Maria Peschel-Gutzeit, a Hamburg lawyer and politician, became the laureate.

Last year, this award was given to a resident of the federal state of Saarland – German feminist and publicist Marlies Krämer. The award ceremony took place on International Women’s Day – March 8.

The Anne-Klein-Frauenpreis Women’s Prize was established in 2012 by the Heinrich Böll Foundation. It is honored by women who fight for gender equality. The award is named after the lawyer and former senator of the state of Berlin Anne Klein, who died in 2011, the winner is selected by a jury of five people. The amount of the award, funded by donations, is EUR 10,000. 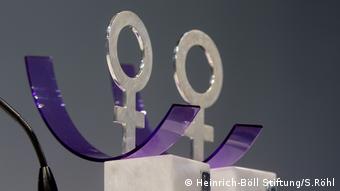 READ Also:  Dune show, the return of the ninety-year-old Eastwood, finally James Bond, Diabolik with Luca Marinelli and Miriam Leone, Lady Gaga and the Gucci family. From Venice to Christmas: guide to the most anticipated films of autumn

“Candidates for the award must be successful in eliminating discrimination on the basis of sex and gender identity and demonstrate commitment to the fight for women’s rights,” – emphasized in the conditions of participation in the competitive selection.

Experts estimate that about 75 million ethnic Germans and holders of German citizenship live outside Germany. Title holder “German Woman of the Year Abroad“, established by the Internationale Medienhilfe, will be named for the third time in 2021.

Honorary title “German Woman of the Year Abroad“ assigned to feminists and activists in German communities, German-speaking cultural institutions and the media around the world. The founders of the award believe that women are still poorly represented in many German social organizations abroad.

“The aim of the competition is to draw more attention to the cultural achievements and traditions of Germans outside their historical homeland. Many people in Germany know almost nothing about the life of German minorities and communities abroad, since these topics are not discussed in lessons in schools and universities in the country.“– emphasizes Björn Akstinat, head of the International Network for the Support of German-language Media.

The first laureate of the “German Woman of the Year Abroad” award was the Romanian journalist and theater expert Elise Wilk. In 2021, five contenders qualified for the final round: an American of German descent, ethnic German women from Brazil, Chile, Namibia and Romania. The winner of the title is traditionally chosen by voting on the Internet and in German-language media outside Germany, and her name becomes known at the end of October.

Else Falk Prize in Cologne

The Else-Falk-Preis was established in 2020 in Cologne at the initiative of the Working Group of the Cologne Women’s Association (AKF). She is named after a politician and women’s rights activist during the Weimar Republic.

READ Also:  The case of the Catholic School, Castellitto paired with Brnice Bejo, the heart of Salemme, Gyllenhaal a stressed agent, Baby Boss 2: a guide to movies in cinemas, on Sky, Netflix, Prime Video and other platforms

“Else Falk was an outstanding citizen of Cologne: from 1919 to 1933 she headed the city’s association of women and was chairman of the working group of the Rhineland and Westphalia associations. She also led the association for the rehabilitation and education of mothers and founded four nursing homes for women who became impoverished after the First World War. war and the inflation that followed, “AKF Deputy Chairman Marita Alami told DW in an interview. 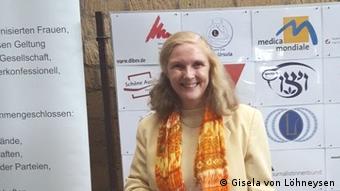 The competent jury, which selects the winner, consists of 13 people. The first recipient of the award was Frauke Mahr, Managing Director of the Lobby für Mädchen, a public association that fights discrimination such as daily sexism or teen mobbing in the media and social media.

The amount of the award is 5 thousand euros. Its laureates have the opportunity to enter their name in the Cologne Book of Honor. The award was presented to the first winner of the award by the Mayor of Cologne, Henriette Reker.

“The Cologne Women’s Prize has one important feature: it is not encouraging, the purpose of which is to support the laureate in her work, but is awarded for achievements already achieved in the fight for equality between women and men,” emphasizes Marita Alami.

It is extremely important for women to have equal opportunities with men in both political and social spheres, to occupy leadership positions in enterprises and firms, says Marita Alami. And their merits in all areas of activity, including efforts and in achieving gender equality, should be recognized accordingly.

“On paper, we have long since proclaimed this, but in practice the situation, unfortunately, looks different. Let’s take this example: only two or three women are honorary citizens of the city of Cologne, men in this sense are in the lead – there are several dozen of them. we still have a lot of work to do, “sums up Alami.

Colin Powell, former US Secretary of State, died of coronavirus | I was 84 years old

Hebrew News – After revealing that she drinks...

Actor Mohanlal will be the head of star...

The last mission of the cowboy Eastwood, the...

Michael Lewis and his partner in a hot...

‘Aishwarya gave me permission to act after marriage...

Avshalom Kor’s ex-wife: “Say goodbye to me in...