At first glance, the labor market in Germany is doing well. The unemployment rate remains low, and even the pandemic did not have a significant impact: during the coronavirus crisis, the number of unemployed increased slightly – from 5.0 to 5.9 percent. Most of the jobs were saved, and the pandemic has shown that teleworking is a feasible option. Nevertheless, the country will face dramatic changes in this decade. And many experts believe that she is not ready for them.

The driving forces of transformation are digitalization and automation of processes, as well as technological changes associated with the growth of electromobility. Hilmar Schneider, director of the Institute for Labor Economics in Bonn, observes this trend: “The days of hard physical work are essentially over. We are increasingly doing mental work.” Simple tasks that do not require high qualifications will be increasingly adopted by robots and computers – or such work will be poorly paid. “And we have made great progress in this. What could be automated is already automated,” he says in an interview with DW.

Robotics are already widely used in industry and warehouses. In the field of logistics, global changes are coming: if now a person is still driving a truck, then with the development of autonomous transport, this need will disappear. Over time, drivers will no longer be needed. The same goes for taxi service or Uber.

Roland Verwiebe, a sociologist at the University of Potsdam, is confident that many jobs will cease to exist, but it’s not just low-skilled workers that need to worry. “Digitalization is an epoch-making breakthrough. It will also affect the types of activities that now require a good education,” the professor is convinced. As an example, the scientist cites the profession of a translator, which is gradually being replaced by such online services as Google Translate or DeepL. Lawyers can also potentially lose their jobs, since clients will be able to obtain legal information using automatic systems, and bank employees.

READ Also:  The Ministry of Economic Development has worsened the forecast for the growth of real incomes of Russians

Where there will be more jobs

“Germany is in the midst of changes and will feel them even more in the future,” the sociologist predicts. At the same time, the country runs the risk of falling behind the rest. The coronavirus pandemic has highlighted a number of weaknesses, especially in the area of ​​public administration. Health departments were often overwhelmed and relied more on faxes than modern communications to keep track of infection chains. And in schools, the digital competencies of students and teachers leave much to be desired. But it’s not just digitalization that threatens jobs. 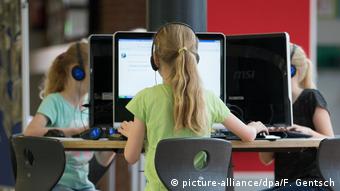 Digital competencies in German schools are not yet a standard

Experts predict that the development of electric mobility in the next four years will cost almost 200,000 jobs in the German auto industry, since the production of electric motors and transmissions is less labor intensive. This is the conclusion made by scientists from the Institute for Economic Research at the University of Munich. Earlier studies estimated labor market losses even higher. At the same time, new jobs will be created in the field of production and servicing of electric vehicles, the number of which will exceed the disappeared ones. New vacancies will also appear in other sectors of the economy. According to the consulting company Deloitte, by 2035, there will be about 2.1 million jobs in professions in which specialists are difficult to replace with technology – mainly in the fields of health care, education and training, as well as management and administration.

Germany will increasingly depend on foreigners

Those who lose their jobs due to digitalization will not be comforted, since their qualifications are often insufficient for such vacancies. The problem is aggravated by the fact that in Germany the share of low-paid jobs is very large: one in five workers receives the minimum wage or slightly more. In the Scandinavian countries, the Netherlands or France, this figure is half as much. The way out is seen in raising education. The Boston Consulting Group estimates that in the automotive industry alone, some 800,000 employees will soon need new skills. The well-being of an aging German society will also depend on labor migrants. “This requires new concepts to attract highly qualified specialists. The existing ones are not enough today,” says Hilmar Schneider. And here a lot depends on politicians.

In 2020, access to the German labor market was facilitated for non-EU specialists. Representatives of working specialties can now find a job in Germany, if the diploma is recognized in Germany and there is a job offer. It is also allowed to come to the country for six months to search for a suitable vacancy. Whether labor migration will be further simplified depends on who joins the new government coalition. Its likely participants – liberals and greens – are in favor of modernizing immigration legislation, including further facilitating the procedures for obtaining a visa to work in Germany, as well as the recognition of professional qualifications.

In particular, the Soyuz-90 / Greens party offers a flexible system of points to assess the demand for a foreign specialist based on an annual analysis of the situation on the labor market and, as a bonus for foreigners, the opportunity to obtain German citizenship after five years of legal stay in Germany. the Democratic Party (FDP) advocates the introduction of a “blue card” for workers without higher education, as well as the selection of applicants to move to Germany according to the Canadian model.

Maid and The Equalizer, Luna Park and La Tamburina: the new series for the weekend

Oldest bank in the world with an uncertain...

Scholz and Habeck admit a blockade on taxes

Wind and solar – these are the beneficiaries...

Artificial intelligence learned to select the pin-code of...