Discord gas. How Gazprom quarreled with Hungary | Ukraine and Ukrainians: A View from Europe | DW

The agreement on gas supplies to Hungary signed on Monday, September 27, by Budapest and the Russian “Gazprom”, has caused a real diplomatic scandal. Ukrainian Foreign Minister Dmytro Kuleba called this a blow to Ukrainian-Hungarian relations, and his department called the Hungarian ambassador to give an explanation. The mirror step was also resorted to in Budapest. At the same time, Hungarian Foreign Minister Peter Siyjarto even said that a sharp reaction from Kiev violates the country’s sovereignty.

In addition to specific losses from the loss of Russian gas transit to Hungary associated with the new contract, Ukraine already sees these events as evidence of a strategic threat to completely lose the status of a transit country for blue fuel to Europe. For example, the head of the Ukrainian GTS Operator, Sergei Makogon, called the new agreement between Budapest and Gazprom “a shining example of the Kremlin’s policy towards Ukraine.” “As soon as it becomes technically possible to bypass Ukraine in transit of gas, Gazprom launches gas through longer, but its own transit pipelines,” Makogon wrote on his Facebook page.

At the same time, despite the transit contract of the Ukrainian side with Gazprom until 2024, Makogon expects a significant further reduction or even a complete stop of transit to Hungary through Ukraine. And the technical completion of Nord Stream 2, he said, creates critical risks for the existing transit through Ukraine and the extension of the contract after 2024.

Ukraine appeals to the European Commission

The Ukrainian Foreign Ministry has already announced its desire to postpone the meeting of the Joint Intergovernmental Ukrainian-Hungarian Commission on Economic Cooperation under the co-chairmanship of the Foreign Ministers of the two countries. This meeting was to take place on September 29-30 in Budapest.

At the same time, as stated in Kiev by Kuleba, who is quoted by the Ukrainian media, the meeting was actually canceled even before the signing of an agreement between Budapest and Gazprom. “We knew that the Russian delegation was already flying there, that this agreement would be signed. And when they signed this agreement, they already knew about our position,” the minister said. “This is a blow, and we will respond to it accordingly, since there should be no regret and no condolences,” the head of the Ukrainian Foreign Ministry said, announcing further measures “to protect Ukraine’s national interests in this situation.”

READ Also:  China's Ministry of Industry: Efforts to Increase the Guarantee Fund for SMEs by RMB 1.5 Trillion This Year

He did not specify exactly what steps are being discussed, but the Ukrainian Foreign Ministry has already announced that they will turn to the European Commission to provide an assessment of the compliance of the Hungarian-Russian gas agreement with European energy legislation. Meanwhile, the European Commission itself said it would study what the consequences of a long-term contract with Gazprom for the supply of gas to Hungary might be. 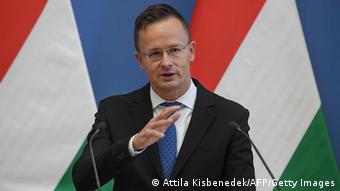 However, so far the pressure from Kiev is causing only resistance in Budapest. Siyjarto called the decision of the Ukrainian authorities to appeal to the European Commission as deeply outrageous, adding that Ukrainians have nothing to do with who Hungary concludes agreements with.

The experts interviewed by DW call this position of the Hungarian side quite expected. Thus, the expert of the International Center for Advanced Study Mykola Kapitonenko notes that against the background of numerous disputes with Budapest over other issues in this confrontation, Ukraine comes out from a weaker position than Hungary. “This is especially obvious now – after the completion of new bypass gas pipelines and the rapid rise in gas prices on the European market,” says Kapitonenko. In his opinion, the desire to secure a long-term contract at a favorable price can play a much greater role for the Hungarian government than the possible outrage from Kiev.

Director of the Institute for Central European Strategy Dmitry Tuzhansky also considers the motivation of the Hungarian side to be purely rational. “This country is 70 percent dependent on Russian gas. In addition, the old contract that Hungary had with Gazprom ended in 2015,” Tuzhansky recalls. The expert suggests that the more favorable terms offered by the Russian company could have prompted Budapest to agree to gas supply routes bypassing Ukraine. According to him, this could carry additional weight as a government coup ahead of parliamentary elections in Hungary, scheduled for next spring, and against the backdrop of European fears about a new gas crisis.

The director of the Energy Research Center Oleksandr Kharchenko speaks about the non-constructiveness of the Ukrainian position in such conditions, according to whom such loud statements by Ukrainian diplomats only harm, not solving the problem, but complicating cooperation where there are no conflicts between the two countries yet. “We need to understand that each country in such matters will be guided primarily by its own strategic interest,” he warns.

At the same time, Kharchenko does not call to release the situation on the brakes. He believes that Ukraine should act more carefully in this situation. So, according to him, an appeal to European partners is the right step, because the search for possible violations of European rules in the new contract transfers the dispute from the plane of a bilateral conflict, where the Ukrainian side is trying to exert political pressure, into the plane of protecting common European interests and rules with the help of legal mechanisms. …

Tuzhansky is also in favor of a milder form of pressure on Hungary. In his opinion, Ukraine could also call on Slovakia and Poland to join the negotiations with Hungary – countries that can also lose a lot due to the new gas policy of the Kremlin.

Kapitonenko, in turn, noted that Ukraine should learn a lesson from this conflict: “The Hungarian example can be contagious, and then everyone will be for themselves in an attempt to ensure guaranteed gas supplies at the lowest possible price. but to think about how to convince the Europeans that the preservation of the Ukrainian GTS is also in their interests. “

An end to Chinese IPOs on Wall Street?...

Toyota Corolla Cross to Europe, and also to...

Beecom expanded the V series and secured a...

Bronze: Winning a tender for the supply of...