The bus accident on Shamgar Street in Jerusalem: a 30-year-old woman and two girls were killed 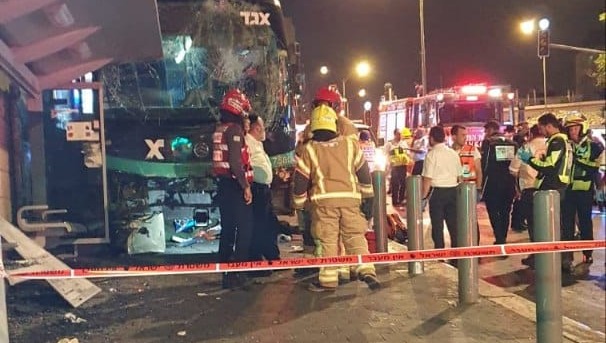 Horrific accident in Jerusalem: The driver of an Egged bus lost control this evening (Thursday) and crashed into a store on Shamgar Street in Jerusalem. MDA medics and paramedics who were called to the scene had to determine the death of a woman in her thirties and a 3-year-old toddler. Later, the body of another 7-year-old girl was found under the wheels of the bus.

Initial: a bus lost control and crashed into a store on Shamgar Street in Jerusalem, two were critically injured on the spot@SuleimanMas1 @carmeldangor pic.twitter.com/ECi7xVMpjo

Many police forces and traffic accident examiners of the Israel Police quickly arrived at the scene and began examining the circumstances and collecting evidence. First, the police ruled out the possibility that this was a terrorist incident and asked to convey: “We ask the curious public not to approach the scene and allow the rescue forces to finish the emergency operations at the scene.”

Nathaniel Lifshitz and Bar Ezer, MDA paramedics who arrived at the scene said: “This is a shocking accident, under the back of the bus we saw a woman about 30 years old and a toddler about 3 years old lying unconscious, with severe injuries, we performed medical tests, they were without signs of life and in a while Shortly we had to determine their death, a 7-year-old girl was trapped under the bus who could not be reached, she was unconscious and after the bus was lifted she was rescued with no signs of life and we had to determine her death.”

The bus drivers’ organization: “The drivers are under collapse. A shortage of over 5,000 drivers”

The bus drivers’ organization from the National Histadrut issued a particularly quick response to the accident, which joins the serious accidents this week: “The bus drivers are under collapse and most of them drive long hours every day due to a shortage of over 5,000 drivers. The buses have become a ticking time bomb due to the severe shortage. It is time that the heads of The Ministry of Transportation must take this seriously. The drivers and passengers must not deprive themselves of their lives.”

The CEO of Haralbad, Dr. Erez Kita, said: “We express our condolences to the families whose lives were broken in an instant.
We conclude a difficult and bloody week on Israel’s roads.” Kita also added that the National Road Safety Authority is currently promoting a national plan that includes, among other things, extensive reference to the heavy vehicle and public transportation sectors, according to him: “The plan includes driver training, promoting technologies to prevent dead spots and driver fatigue, establishing Rest bays, adding drivers and improving the set of safety officers and the supervision of the companies. Only a targeted and budgeted national program over several years will reduce the damage.”

The “abandoned Disney”, a town of castles that was not; why
Posted onSeptember 27, 2022