We didn’t want blood. Aleksievich on the events in Minsk a year later | Belarus: a view from Europe – special project DW | DW 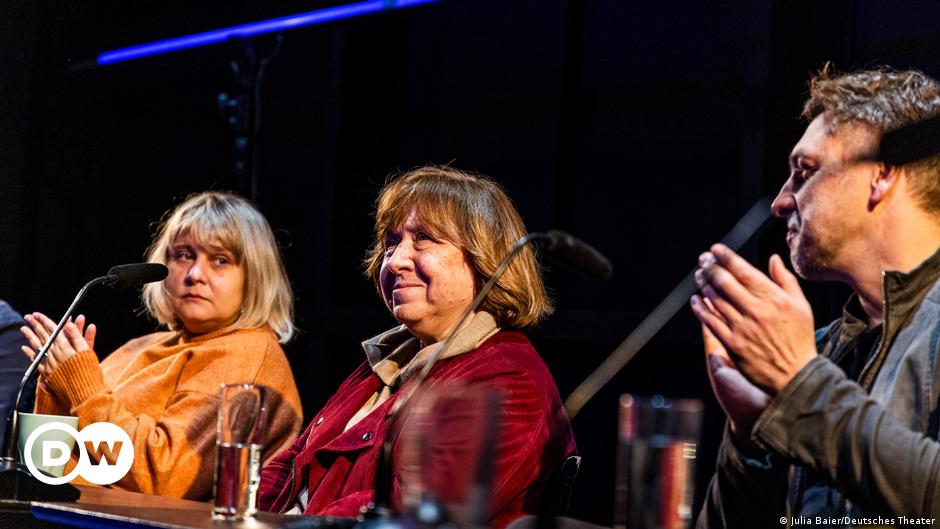 The hall is twilight, there are seven actors on the stage, all in black. They are reading. They read a text that its author, Lithuanian playwright Marius Ivashkevichius, called “stage fantasy” – a kind of theater at the microphone, in which the audience has to conjecture what they hear. And they hear about blood, death and love.

The Russian title of the production is translated as “Fainting”, but in German it sounds more terrible – Ohnmacht, that is, “powerlessness”. The plot is based on the documentary novel “Zinc Boys” written by Svetlana Aleksievich in the late 1980s about the war in Afghanistan. The Lithuanian playwright retells it from the point of view of mothers who have lost their sons. This is a kind of anti-war manifesto based on events more than thirty years ago, which suddenly became relevant.

The actors read so shrilly that they themselves sometimes cannot contain their emotions. From time to time they brush away tears and turn the pages. And so for an hour and a half.

Svetlana Aleksievich: a year in Berlin

The hall of the German Theater is practically full; The premiere of the production “Fainting” takes place within the framework of the four-day political theater festival Radar Ost.

When the lights come on in the hall, the Lithuanian playwright takes the stage in company with Aleksievich. The Belarusian writer has been in Berlin for a year now, in the summer she received the Order of Merit for the Federal Republic of Germany from the President of the Federal Republic of Germany, but she appears in public relatively rarely. The premiere of the production in German is followed by a discussion about “art at risk” – playwrights from Russia, Belarus, Ukraine and Bosnia and Herzegovina talk about their work against the backdrop of geopolitical upheavals, wars and repression.

Panelists on art at risk at the German Theater

According to Svetlana Aleksievich, more than a year after the start of mass protests in Belarus, she occasionally hears reproaches that “we have chosen the peaceful option” (Aleksievich is a member of the Coordination Council of the Belarusian opposition. – Ed“But I would not want a repeat of the Tiananmen Square tragedy (in June 1989, the Chinese authorities used the army to suppress anti-government protests in Beijing, resulting in the deaths of hundreds of people.) Ed.) in Minsk, says the writer and Nobel Prize laureate in literature. “We need a different philosophy, we need to get rid of the theme of blood that hangs over us,” says Aleksievich. She admits that she is “confused” and “unsure” – like many of her compatriots – under the impression of the ongoing repression and arrests.

Marius Ivashkevicius thanked Alexievich for the opportunity to freely use the text of “Zink Boys” for his production – and called her novels the best “vaccine of pacifism.” The director, half-jokingly, half-seriously, drew analogies with the coronavirus pandemic and noticed that if world pharmaceutical concerns were developing a vaccine against wars, it would consist of the books of the Belarusian writer. “When 70 percent of the world’s population reads Aleksievich’s books, all wars will end,” says the Lithuanian director. His production based on the book by Aleksievich is not devoted to the war in Afghanistan, but to wars in general, he adds, because “they do not return from the war – even those who remain alive and physically change morally so that they are incapable of a peaceful life.” 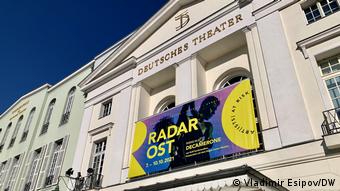 The Radar Ost Theater Festival is being held in Berlin for the fourth time. Its curator Birgit Lengers says that the theme of Belarus this year suggested itself, and that the name of the production Ohnmacht (“Powerlessness”) to a certain extent echoes the perception of the situation in the republic – which means a four-day theater festival in Berlin against the background of suppression protests and ongoing repression?

Last fall, the theater held an action of solidarity with Belarusian actors who were persecuted for protests against Lukashenka’s re-election; this year Belarus became the main theme of the theater festival with a political context Radar Ost. And yet: no one feels “powerless” in the German theater – as Birgit Lengers says, “we are in a privileged situation – we can invite Belarusian colleagues to such festivals and thereby maintain the media interest in the situation in Belarus. such events disappear from the media’s field of vision. “

According to Svetlana Aleksievich, her new book will be dedicated to the revolution. She says that by analogy with her novel “The War Has No Woman’s Face”, she is offered to name a new project “The Revolution Has a Woman’s Face”, since women headed the protest movement in Belarus, and women predominated among the participants in street actions. But it’s not that simple.

The Nobel Prize Laureate for Literature says that one of her heroes announces that he will not go to the demonstration, because, they say, if “we go, then go with a gun and take mail and telegraph.”

But the writer herself is not sure that this is the right path.

According to her, she is given strength by appearances in Belarusian courts of young people accused of participating in protest actions. “These are amazingly strong people, and their closing words made me fall in love with their people,” says the writer. “The last word in court is now a kind of new literary genre.”

She expects to complete work on her new book by the spring.

Manu Vallejo, the hero of Malaga: “This start reminds me of Cádiz, where I was happy: I want to find myself again”
Posted onFebruary 4, 2023February 4, 2023