Fatal accident near Gimzo; A 60-year-old was killed

MDA medics and paramedics determined the death of a 50-year-old woman after resuscitation operations at the scene and provide medical treatment to 3 other wounded who will later be evacuated to a hospital, including a 50-year-old woman in critical condition and 2 minor injuries. 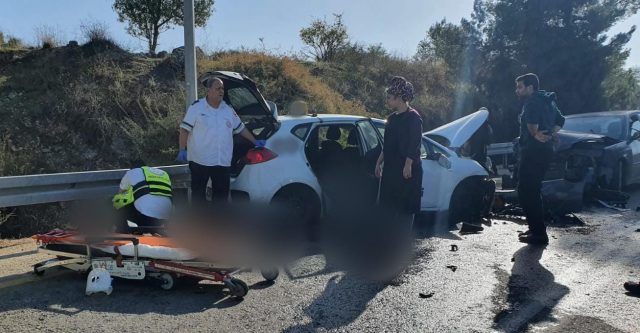 MDA paramedic Moshe Gelbstein and MDA senior paramedic Eitan Shnor said: “This is a very serious road accident. Two of the wounded were lying unconscious on the road and two others were fully conscious. “Without a pulse and without breathing, but in the end, unfortunately, we had to determine her death. The second wounded woman was taken to an intensive care unit and evacuated to Shamir-Assaf Hospital.

Police are investigating the circumstances of the accident

Police have launched an investigation into the circumstances of a fatal car accident that occurred this morning involving two private vehicles in Moshav Gimzo.

According to medical sources, as a result of the accident, a woman, whose identity is not yet known, was killed at the age of 60. In addition, 3 wounded were evacuated – 1 seriously and 2 lightly to Assaf Harofeh and Tel Hashomer hospitals.

The traffic inspectors of the Israel Police in the Central District are currently at the scene and have begun examining the circumstances of the accident.

The second season of the Lanka Premier League begins today!

Body floating in water; Shock to the rescued...

Weather: Clear and cold than usual. Later in...

In Buryatia, they are preparing for an outbreak...

The ‘alcohol addict’ Asami who beheaded the goat...

Scientists in the United States predicted the peak...

Senior health officials are divided over whether to...

The amount of damage from the riots in...