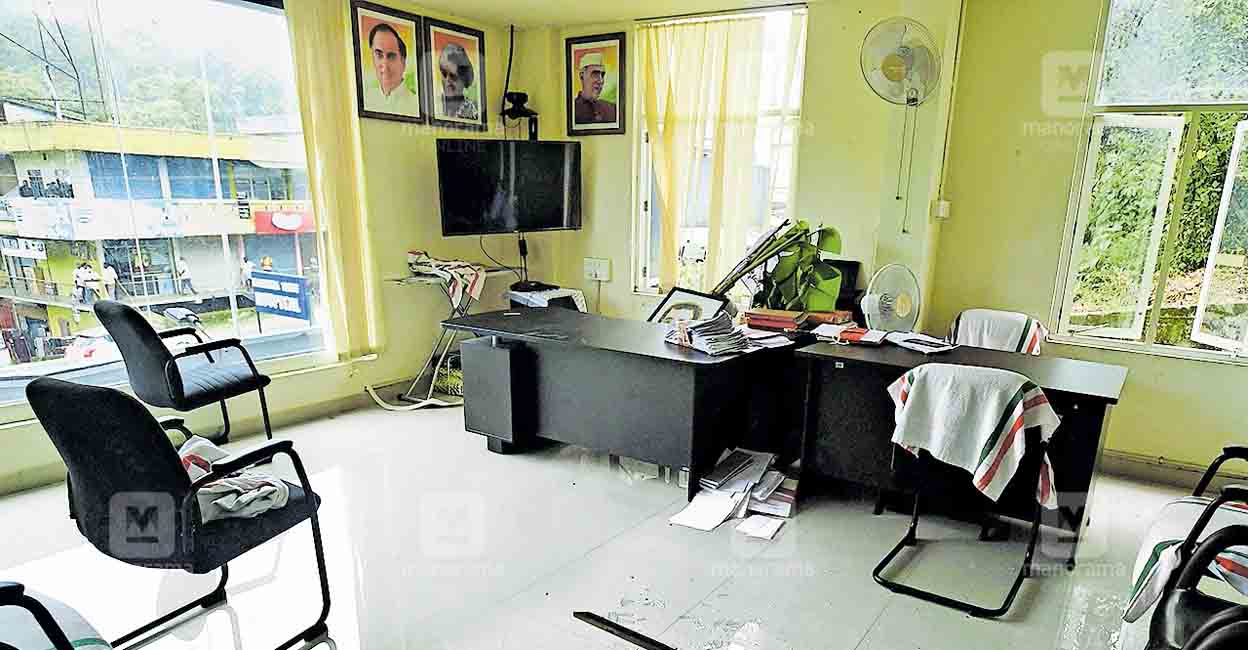 Rahul Gandhi’s MP’s office in Kalpetta ∙ Wayanad raided by SFIs. The mob broke the shutters to the upstairs office and went through the sunshade slab through the window, dropping files and a picture of Mahatma Gandhi; A picture of a banana tree was placed on Rahul’s chair. The ruling party’s student body spent about three and a half hours in the office, about 300 meters from the district police chief’s office. Office workers Augustine Pullapally, KR Ratheeshkumar and Rahul Ravi were injured.

The Chief Minister directed to immediately suspend the Kalpetta DySP who was in charge of the place. The ADGP will investigate the violence at the police headquarters. The SFI march was marred by violence at around 3.30 pm yesterday, demanding that Rahul break his silence on the issue of ecologically sensitive areas. Led by district president Joel Joseph and secretary Jishnu Shaji, only a handful of policemen were in front of the office to face the march of about 100 activists. The shutters of the MP’s office had been closed earlier when they came to know about the protest, but the activists broke the shutters and went inside while the police were watching.

Meanwhile, about 20 SFI men crawled through the road near the office to the second floor of the building and into the window. The activists were arrested for more police place since the violence. 19 SFIs, including Jishnu Shaji, have been remanded in police custody on charges of vandalism of public property.

Congress staged protests across the state against the violence; There were clashes in several places. The Congress started a strike in front of the district police headquarters in Kalpetta alleging that it was not taking action against the SFIs. There were several clashes between the police and UDF activists.

THIRUVANANTHAPURAM: The Supreme Court on May 3 ruled that one kilometer around the forest area should be made a buffer zone. The state government now has to file a review petition in the Supreme Court against this. The Congress, which is not in power at the Center or in the state, has little to do with this. As Wayanad MP, Rahul Gandhi had written to the Prime Minister and the Chief Minister in this regard. Rahul shared a copy of his letter to the Prime Minister on social media yesterday.

Meanwhile, it is alleged that the state cabinet meeting on October 23, 2019 had in principle approved the draft notification as a buffer zone up to one kilometer and this was the main reason for the Supreme Court ruling.

Thiruvananthapuram: The Congress has termed the attack on Rahul Gandhi’s office as a drama for Modi. KC Venugopal said that the CPM is trying to get into Modi’s good book. Opposition leader VD Satheesan alleged that Pinarayi was trying to please the BJP national leadership to get rid of the gold smuggling case.

LDF convener EP Jayarajan said there was no need to march to Rahul’s office now. He is being hunted by the ED. Jayarajan also said that the CPM’s approach was to use the ED to hunt down political leaders.