Diletta Leotta, Can Yaman talks about the wedding: “Marriage? I am one who …” 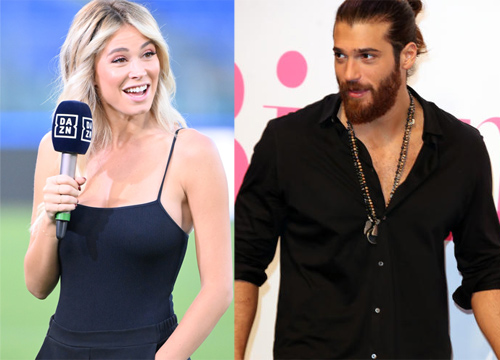 Diletta Leotta, Can Yaman talks about the wedding: “Marriage? I’m someone who …”

Can Yaman speaks for the first time about the wedding with Diletta Leotta. Will the two get married? “When will the marriage that everyone is talking about? I am one who acts without taking too long, without mincing words. I follow the push, fast. I think instinct is in the name of God. But let’s keep the surprise on something, “he tells Vanity Fair. The Turkish actor – who is preparing for Sandokan, Lux Vide’s international event series – about the love between him and the host of Dazn underlines: “It is a loyal love, in which I take my responsibilities, as we have seen”. And on his relationship with Diletta Leotta he adds: “I have great respect for her, for our relationship and confidentiality is our first promise: we communicate what concerns us, together”.

Daniele Scardina talks about the romance she lived with Diletta Leotta. The boxer explains to Verissimo: “That with her was a beautiful story, we were accomplices in everything, we were true. It was a true story, it was a good time. I was in love, we no longer feel but I love her and I respect her very much for the woman she is. Girlfriend? I hope he is happy ”, the words of King Toretto on the transmission by Silvia Toffanin.

Diletta Leotta and Can Yaman in Sicily: the actor sees father Leotta. The gossip

Diletta Leotta e Can Yaman they would be in Sicily (after photos of the couple leaving Fiumicino were shot on the social networks). According to the latest gossip, in fact, the beautiful presenter of Dazn she wants to introduce her new boyfriend to her dad. A step forward that, if confirmed, would bring the couple closer to that marriage we were talking about in recent days: ” I have to think about it, ” Leotta would have replied, according to the gossip, in front of the proposal. And perhaps after the meeting in Catania between Can Yaman and the Diletta’s father who knows that the official announcement for a wedding in August will not arrive (so the rumors told). During the week Diletta Leotta and Can Yaman had been at the stables. The journalist and showgirl had posted a short video of a riding lesson at the stables with Can Yaman and his Instagram stories. cavallo Cassius. “Come on Cassius!” She says in the video. Diletta Leotta appears on the actor’s horse, guided by Can Yaman and an instructor who tells her: “You’re very good!”

Diletta Leotta takes the first sun of the year and posts the photo on social media for the happiness of his fans. The presenter of Dazn he is smiling as he welcomes the spring that seems to be peeping over Italy. See-through T-shirt, leather pants and black boot – needless to say, she is as beautiful as ever. And the fans approve: over 400 thousand likes in one day. “Beautiful as the sun”, I write the followers to Diletta Leotta. More and more queen of Instagram and in recent weeks also protagonist on the gossip front for her love with the beautiful Turkish actor Can Yaman. The last big question that grips fans is: will they marry or will they not marry?

Granada appeals the choice of A Corua as the headquarters of the Aesia
Posted onFebruary 4, 2023
Menu