“Very good, you have made me better” – time.news 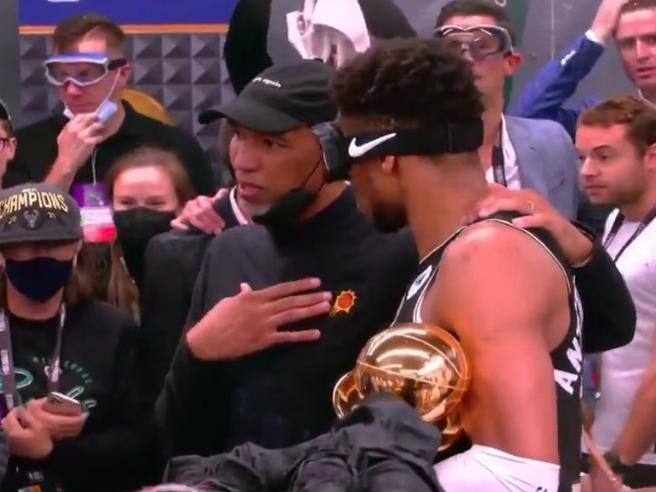 The coach of the Phoenix Suns beaten in the final enters the opponents’ dressing room and compliments them: “Thank you for this experience, you have been very good”

Monty Williams he just lost the most important game of his career, Game 6 of the NBA Finals. In the Milwaukee Bucks champions locker room everyone has a bottle in their hand. Some wear a champagne mask. In short, there is a celebration for a title expected fifty years. Monty, the coach of the newly beaten Phoenix Suns, enters anyway.

He has the hat pulled down on his head, the sweatshirt he was still wearing on the bench. Go to the center of the locker room. Abbraccia Giannis Antetokounmpo, the man who smashed his boys to death, who still has the MVP trophy from the finals under his arm. Then speak.

«I came to congratulate you, as a man and as a coach: you were very good – he says while a member of the Bucks staff drinks from a bottle and another records it with his mobile phone. You deserved the victory. I thank you for this experience – he continues, putting his hand on his chest -. You made me a better coach, you made my team better. Congratulations“. General applause, someone shouts, Giannis gives him a high five.

“You made me a better coach, you made us a better team.”@Suns HC Monty Williams congratulates the @Bucks in the locker room after Game 6 pic.twitter.com/5VT9CiOm0s

It is not obvious, it is not trivial. It is not, that of Williams, an artificial gesture, maybe thought to favor of the room. The video showing the scene is from a cell phone of one of the people in the locker room. We have all seen, however, the respect that sport can teach. The strength to accept defeat, even if it is burning, even if it came on the most important day.

And it is no coincidence that Coach Williams set the example. One who lost his wife Ingrid, 44, in a car accident in 2016 in Oklahoma City (where her husband was assistant coach). A car invaded the lane where she was traveling, with three of her five children in the car (fortunately unharmed). Monty stopped for two years, then he chose to start again from his job, basketball. First deputy in Philadelphia, then in Phoenix to raise a franchise in crisis. He hit the playoffs ten years after the last time, he reached a few baskets from game 7 of the finals. He may have lost on the court, but this defeat made him stronger. He is already a champion, he has time to take the NBA ring as well. The controversial stopover of a Chinese surveillance vessel in Sri Lanka
Posted onAugust 17, 2022

Anne Richard for “To Our Excised Bodies”
Posted onAugust 17, 2022

Training the unemployed: the reform that cannot wait any longer
Posted onAugust 17, 2022

Varisu shooting spot video has no chance to be leaked…Director gave strict order to the crew
Posted onAugust 17, 2022
Menu